Your Baby’s Food Might Be Loaded With Heavy Metals. Here’s What to Do. 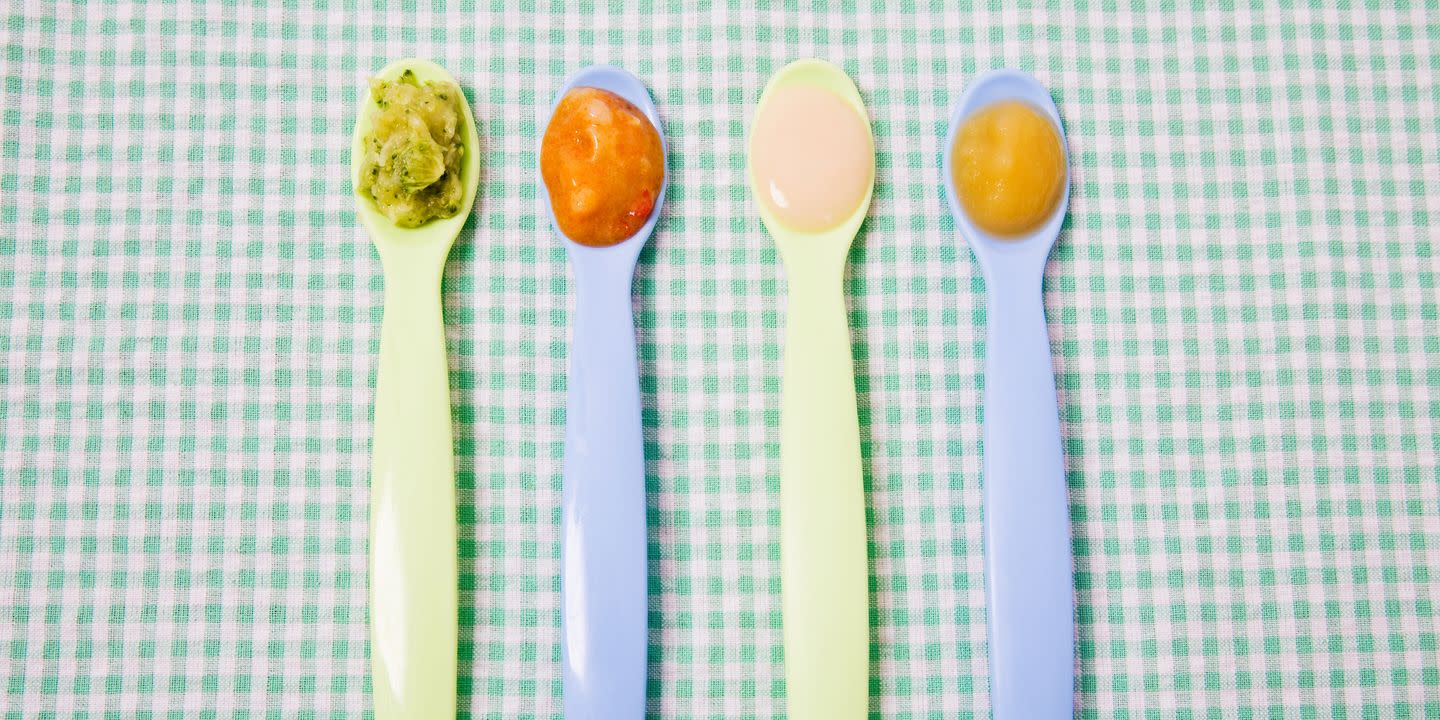 A new congressional investigation has found leading baby foods contain alarmingly high levels of damaging heavy metals. Manufacturers reported some of their foods pack as high as hundreds of parts per billion (ppb) of heavy metals—well above the acceptable levels of up to 9 ppb.

If you’re a new parent, you’re probably concerned—and a bit confused—about what this all actually means. What are heavy metals? Why are they harmful? And what on Earth went wrong in these baby food factories? Here are the facts.

What Are Heavy Metals?

Heavy metals are a loosely defined category of metallic elements that we consider “heavy” because of their high atomic weights. In environmental testing, the term refers to elements like lead and mercury, which can do damage to plants and animals if they’re present in large quantities.

The new congressional report, from the Subcommittee on Economic and Consumer Policy (part of the Committee on Oversight and Reform), cites findings of dangerous levels of arsenic, cadmium, lead, and mercury in baby food.

Cadmium, lead, and mercury are all heavy metals with respective atomic weights of 112.4, 207.2, and 200.6. (While arsenic isn’t technically a heavy metal, it’s often found in compounds with lead, for example.) When these metals accumulate in large amounts in your body, they cause damage, according to the Occupational Safety and Health Administration (OSHA). Even the heavy metals your body needs in very small amounts, like iron, can become harmful in quantity.

The presence of foreign matter in your body is a risk factor for diseases like cancer, but it’s also dangerous on its own as heavy metal poisoning. The National Institutes of Health (NIH) explains:

“Toxicity can result from sudden, severe exposure, or from chronic exposure over time. Symptoms can vary depending on the metal involved, the amount absorbed, and the age of the person exposed. For example, young children are more susceptible to the effects of lead exposure because they absorb more compared with adults and their brains are still developing.”

That’s scary, but it makes sense. Children are much smaller than adults, and the same amount of material makes a bigger impact inside their bodies. But how did these heavy metals make their way into baby food, anyway?

Why Are Heavy Metals in Baby Food?

There’s no limit from the U.S. Food and Drug Administration (FDA) that regulates how many heavy metals are allowed in baby food. If that sounds bewildering, it both is and isn’t.

The FDA “monitors” levels of heavy metals even when there isn’t an established firm limit. “Sampling assignments may be conducted in response to reports of elevated levels of toxic metals or other elements in certain foods or to focus on a specific food, food additive, or specific food group (such as foods commonly eaten by infants and toddlers),” the FDA explains on its website.

The FDA uses a similar “buyer beware” approach for mercury levels found in seafood, for example. But, as the investigation-sponsoring organization Healthy Babies Bright Futures points out, what pregnant people and infants consume has an outsize impact on children’s outcomes. These neurotoxic heavy metals can materially harm growing and developing brains and bodies.

Gerber, one of the brands included in the investigation, responded to the report with a statement to CNN that reads in part:

“[T]he elements in question occur naturally in the soil and water in which crops are grown. To minimize their presence, we take multiple steps including: prioritizing growing locations based on climate and soil composition; approving fields before crops are planted based on soil testing; rotating crops according to best available science; and testing of produce, water and other ingredients.”

This raises more questions about soil science itself. Can it be there’s nowhere to grow ingredients that isn’t contaminated with heavy metals to this extent? Again, this falls into an area of regulation.

Only a minuscule portion well under 1 percent of Earth’s land area meets the official definition of contaminated with heavy metals, according to a 2018 study on soil remediation, the chemical process of pulling contaminants back out of the soil.

Remediation is costly, and the soils that Gerber is blaming for heavy metals might not even meet the internationally defined limit for contamination. The normal range is about 15 to 40 parts per million (ppm) of lead, for example, because lead is a naturally occurring element found everywhere in microscopic quantities. But decades of use of leaded gasoline increased lead pollution in our environment, as did use of lead-based insecticides (yikes!) and lead paint.

How Can You Avoid Heavy Metals?

What can you do when so many major baby food makers have alarmingly high levels of toxic heavy metals? You can start by steering clear of the brands included in the congressional report, like HappyBABY, Earth’s Best Organic, and Parent’s Choice. (For some light reading, check out the full report here.)

Our friends at Best Products, meanwhile, have researched and tested many baby food brands. Here, they recommend four reputable brands that are nowhere to be found on the congressional hit list:

Here’s what one of those brands, Serenity Kids, had to say about the congressional report:

Due to a long history of soil and water contamination, heavy metals are found throughout the food supply chain. It’s nearly impossible to have a product that is completely free from heavy metals unless it is highly processed and refined. At Serenity Kids, we carefully vet our suppliers to ensure we use the cleanest possible ingredients. We use organic vegetables that come from trusted American-family farms that conduct testing on their own soil, have robust food safety programs, and undergo the most rigorous food safety audit, SQF Level III. Meats are naturally lower in heavy metals, and we source ours from farms with the highest quality and environmental standards.

Our ingredients are tested prior to purchasing, and we test our finished pouches once produced. Serenity Kids is one of the only pouched baby foods that has received the Clean Label Project Purity Award. Clean Label Project purchases products from retailers and tests them at an accredited lab for over 200 different contaminants including heavy metals, glyphosate, agrochemicals, plastics, lead, arsenic, cadmium, mercury, BPA/BPS and many more toxins. Because the FDA has not (yet!) set standards for US baby foods, we chose to follow European standards, which are among the strictest in the world. We are happy to say that our products meet the European limits!

Meanwhile, if you want to take matters into your own hands, the Center for Agriculture, Food, and Environment at the University of Massachusetts has recommendations for growing safer produce in your garden.

If a baby food brand like Gerber wants to blame soil, you can at least take back control of all the ways you can limit exposure to lead in your own backyard. The Massachusetts researchers suggest growing food crops that flower above ground instead of underground or on the ground, like tomatoes, peas, and corn.

Here are their recommendations for reducing lead exposure:

Still, these are ultimately just guidelines. The Massachusetts scientists say the U.S. Environmental Protection Agency (EPA) limits lead in soil to 400 ppm, with gardening ideally in soil with under 100 ppm only. Crops accumulate and concentrate lead, so even these rules don’t completely ensure safe produce all the time.

“Instead of setting limits for one food at a time, the FDA should standardize maximum levels for each toxic metal that can damage a baby’s developing brain and apply them to all foods. There should be mandatory testing of any baby food product before it hits the shelves, the subcommittee recommended.”

Whether this leads to costly soil remediation or simply more responsible practices during sourcing and manufacturing of baby food, a firm limit on heavy metals exposure in baby food will lead to better outcomes for children.

At the very least, the subcommittee points out, baby food should conform to the firm limits set on bottled drinking water—numbers that already exist on the books, with a structure of testing to ensure companies are compliant.