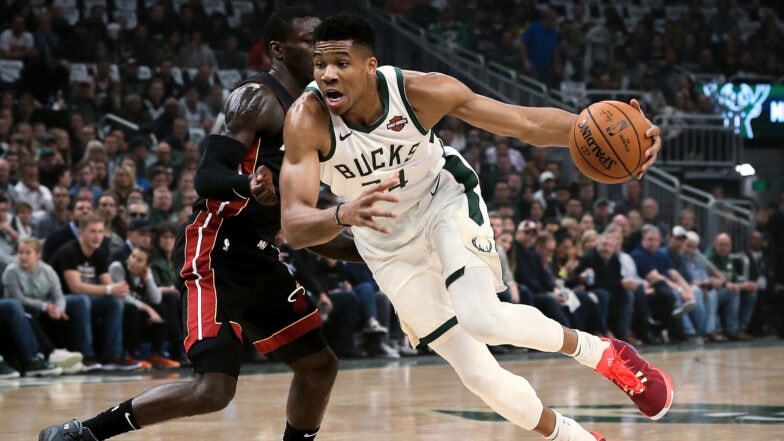 Giannis Antetokounmpo signed an extension and he has some new teammates, but will that add up to a championship for the Bucks?

Keeping it professional and clean, here’s the sanitized version of LeBron James’ reaction to the new NBA season beginning just 73 days after the old one ended:

Well, that’s one way to forecast the 2020-21 season, which starts Tuesday night, ends in July, runs 72 games, and because of a global pandemic will be played out on television, but inside near-empty arenas. But the word blank brings a different meaning too, because not only are we in the dark about what’s coming, we’re also left scrambling to fill in the blanks to make any sense of it.

With the omnipresent threat of coronavirus lurking, and the security of the bubble long gone, this could be the most unpredictable season since, well, since the last one.

But even beyond the health issue, basketball blanks are begging to be filled and fulfilled in a season with plenty of mysteries and might-be’s. And so, here’s a primer on what to look for and anticipate and expect once the ball goes up Tuesday … OK, fine, actually it’s just a bunch of educated guesses.

Giannis Antetokounmpo will have (blank) regrets about signing that massive extension with the Bucks. Right away? Zero regrets. First of all, how many humans, no matter their wealth, get buyer’s remorse about becoming $228 million richer? Also, the Bucks are still in the upper class and with the exception of Brooklyn, nobody in the East upgraded substantially. Speaking of that, everyone is giddy over Milwaukee adding Jrue Holiday. Obviously, he will help at both ends. But here are the facts: Holiday has only made one All-Star team, one first team All-Defense, never All-NBA and helped his team to only two playoff appearances since 2012. Also, because the Bucks surrendered a ton to trade for him, they’ll be forced to pay him massively next summer when he becomes a free agent at age 31, therefore restricting how much they can improve the roster afterward. That’s when Giannis might have regrets.

Russell Westbrook will do (blank) this season for his third team in three years. How about “just enough?” Westbrook still brings the heat three years after winning the Kia MVP and should flirt with triple-doubles when his game is right. What he shouldn’t do is conflict with Bradley Beal, who isn’t a high-usage player, and who’ll get more clean looks with Westbrook attacking the glass and breaking down defenses and kicking the ball out. But Westbrook’s own shooting efficiency is dying quickly and, in a tight game, the Wizards will suffer if he’s left open with the ball beyond 15 feet.

James Harden will be with the (blank) when the season tips. Rockets, most likely, because his situation is complicated. Any team that trades for the unhappy scoring savant must virtually overhaul its entire system … unless Harden goes to a team where he isn’t the first option. Meaning, a team with a better player. That eliminates roughly 26 other teams immediately. The most logical destination is Brooklyn because Harden will be No. 2 to Kevin Durant, and the Nets can send Houston a better package than the Rockets will get anywhere else.

The surprise team will be (blank). Look, the teams projected to be bad will be bad; there are no Cinderellas in the making. Therefore, who’ll be this year’s Miami Heat, the good team that goes next level? The choice here is the Portland Trail Blazers, who had a busy offseason by re-signing Carmelo Anthony, adding Derrick Jones Jr., Robert Covington, and Enes Kanter, got a healthy Zach Collins back, and boast a candidate for Kia Most Improved Player in Gary Trent Jr. As we saw in the bubble, their thirsty superstar, Damian Lillard, is restless and ready. Portland is the dark horse 2021 NBA contender.

The surprise player will be (blank). Deandre Ayton comes into this season dealing with a pair of demons from the past: His banned substance suspension last season which possibly cost the Suns a playoff spot, and the stigma of being drafted ahead of Luka Doncic. However, he also goes into this season prepared to catch lobs from Chris Paul. That will make him a bigger option offensively. If Paul can coax him into making better decisions and being more aggressive in the post, Ayton will move up the big man ladder, maybe skipping a few steps.

The players itching for an injury comeback besides Wall and Durant are (blank). Bojan Bogdanovic, because the Jazz missed his shooting; Victor Oladipo, because the Pacers are still wondering what’s up; Marvin Bagley III, because the Kings drafted him ahead of Luka Doncic; Otto Porter Jr., because the Bulls are desperate; and Will Barton, because the Nuggets lost Jerami Grant.

After Anthony Davis, (blank) will be LeBron’s best teammate. Dennis Schroder needs the ball, and ordinarily that would be an issue for a LeBron teammate. But maybe this is what LeBron needs at this stage, someone to relieve him of that chore, especially in a regular season where LeBron probably will and should get lots of rest given the abbreviated 2020 offseason. Schroder gets to the rim as good as anyone and his shooting and decision making have improved.

The coach-player relationship to watch is (blank) and (blank). Stan Van Gundy and Zion Williamson might be catching each other at the right time. For Van Gundy, the Pelicans’ job is a professional life preserver after a below-expectations stint in Detroit and a fallout in Orlando. Van Gundy is wiser from both, and after a tremendous stint doing TV work, is ready for the bench again. This is Williamson’s second coach and he doesn’t want to travel the same path as Devin Booker, who has averaged one coach for every season of his career. Williamson should enjoy freedom under Van Gundy and hopefully will be unleashed to display the ballistic talent that he is. Expect something around 25 points, eight rebounds and plenty of dunk highlights nightly.

The hard truth is, the (blank) are going nowhere fast. In the last four years, LeBron and Durant passed on the chance to sign with the New York Knicks. That tells you how far this franchise has fallen. There’s no superstar in residence, and the young players all have limitations and flaws. A sketchy Draft history, an inability to attract A-list free agents and an unproven player development system put the Knicks, who’ve missed the playoffs seven straight seasons, in basketball purgatory. Yes, there is new leadership, and a proven coach in Tom Thibodeau, but a return to the Draft lottery is inevitable — and necessary.

The coaching seat will be hottest for (blank). It’ll be a surprise if any coaching changes are made next summer; most jobs appear to be safe, barring a complete collapse. But there’s rising expectations in Atlanta, where the Hawks spent heavily to upgrade a roster they believe is good enough to make the playoffs. Plus, the Hawks were among the worst defensive teams last season, and that needs to change. Which means, Lloyd Pierce has his hands full.

The Spurs’ one-year streak of missing the playoffs will (blank). Sadly for San Antonio, it’s likely to continue. The Spurs are undergoing a generational talent shift, where LaMarcus Aldridge, DeMar DeRozan and Rudy Gay are slowly giving way to 24-and-unders Dejounte Murray, Lonnie Walker and rookie Devin Vassell. Meanwhile, the competition in the West, once again, is too vicious for a team without a superstar. The real question is when does the generational shift begin on the bench? After this season, does cpach Gregg Popovich, who turns 72 next month, give way to Becky Hammon?

Among the players who could be traded by the March 25 deadline is (blank). Myles Turner, Aaron Gordon, PJ Tucker, LaMarcus Aldridge and Terry Rozier. And here are the reasons, in order: Increasingly bad fit in Indy, not the star Orlando thought it had, wants more money, no future with the Spurs, LaMelo Ball and Devonte’ Graham.

Was Atlanta the biggest winner in the offseason?

The best off-season additions will be (blank) in terms of value: Bobby Portis, an active and aggressive player, will be a bang for the Bucks at $7 million for two years … The Raptors got Aron Baynes to replace a prehistoric Marc Gasol for two years at $14 million (the second year a team option) … Serge Ibaka cost the Clippers two years and $19 million for a starting center who spaces the floor and defends … Montrezl Harrell’s poor play in the bubble allowed the Lakers to get the Sixth Man Award winner on marked down discount at two years and $19 million.

The worst off-season additions will be (blank) in terms of value: The Pistons are paying $85 million for three years of Jerami Grant and Mason Plumlee. That’s it. That’s the entire list.

If Giannis is the best player in the East, (blank) is second best. Roughly two years ago, just before Giannis started his Kia MVP streak, Kevin Durant was perhaps the best player in the league. Anyway, KD seems poised to rise again after recovering from a torn Achilles. His game relies more on outside shooting instead of explosive athleticism, which means his injury shouldn’t linger. A Nets-Bucks showdown in the East finals would also be a superstar showdown.

Speaking of showdown, the new blood rivalry in the East is (blank) vs. (blank). Brooklyn vs. Boston if only because of Kyrie. Sadly, the fans won’t be in on the show at TD Garden this season.

The new blood rivalry in the West is (blank) vs. (blank). Clippers vs. Trail Blazers. After being mocked by Paul George and hearing cackling from Lou Williams, Patrick Beverley and Marcus Morris in the bubble, you best believe Damian Lillard knows what time it is.

Some early award predictions for 2020-21

The Kia Rookie of the Year race will be decided by (blank). They’ve played so little basketball since March, so we won’t know about the rookies right away. But: Issac Okoro will get plenty of touches on an average Cavs team. That’s the usual recipe for this award. Beware of Deni Avdija of the Wizards, maybe James Wiseman of the Warriors and, if he can shoot 40 percent, LaMelo Ball of the Hornets.

The Kia MVP race will be decided by (blank). Luka Doncic, Joel Embiid and Damian Lillard, with Luka winning a close contest by doing heavy lifting for the Mavericks until Kristaps Porzingis returns.

The (blank) will be the playoff eight in the East. Bucks, Nets, Celtics, Sixers, Heat, Raptors, Hawks, Wizards. Pacers lose the play-in.

The (blank) will be the playoff eight in the West. Lakers, Blazers, Nuggets, Clippers, Jazz, Warriors, Pelicans, Mavericks. Suns lose the play-in.

And the next champion will be (blank). You’ll just have to wait until our playoff preview next spring. We’re not filling all the blanks right now.

Shaun Powell has covered the NBA for more than 25 years. You can e-mail him here, find his archive here and follow him on Twitter.

The views on this page do not necessarily reflect the views of the NBA, its clubs or Turner Broadcasting.