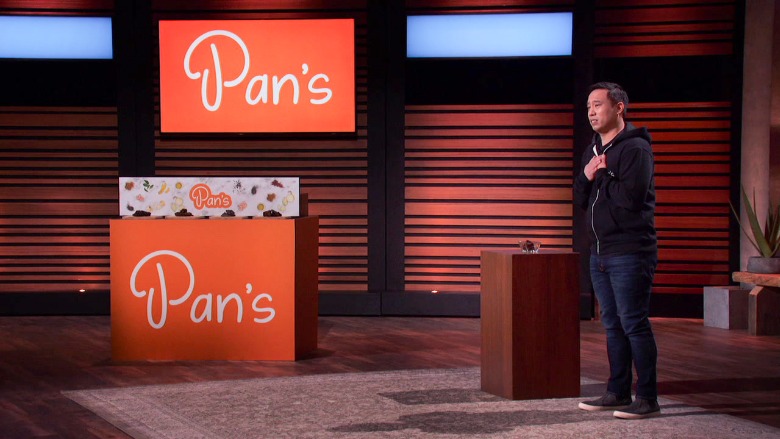 Entrepreneur Michael Pan took his company, Pan’s Mushroom Jerky, to the sharks on ABC’s Shark Tank to see if he could get a bite and score an investment from one of the money moguls.

The jerky is made out of shitake mushrooms, making it a plant-based healthy snack. Watch out for Mark Cuban on this one, as he often invests in healthy or plant-based foods when they’re brought into the tank.

Here’s what you should know about Pan’s Mushroom Jerky:

1. The Mushroom Jerky Is Described as Meaty

According to the company website, the mushroom jerky is described as “meaty” because shitake mushrooms are already known for their dense, fibrous texture as well as their umami flavor.

“Umami, or savoriness, is the fifth taste after sweetness, sourness, bitterness, and saltiness,” the website describes. “Other umami-rich foods include meats, seafood, and cheese.”

The jerky itself is completely plant-based, but the texture will leave consumers satisfied if they’re craving a jerky flavor, the website claims.

2. The Pan Family Has Been Creating Mushroom Jerky for Decades

According to the website, the Pan family has had the recipe for mushroom jerky for many decades, but the founder of the company did not know that until he visited family that he hadn’t seen in years.

“He learned that many of his family members are vegetarian Buddhists,” the website states. “Because of their diet, they craved vegetarian snacks that not only tasted great but also had a satisfying texture.”

Their cravings for something meaty is what convinced them to try creating a mushroom jerky, which is a healthy, plant-based alternative to the meaty jerky.

Michael Pan was in Malaysia visiting family when he learned about the mushroom jerky, and the visit kickstarted his passion for his future company.

“Traveling to Malaysia was partially to get to know my family’s history and culture, which of course involves food,” the website quotes Pan saying. “On one visit, my cousin put a bowl of food on the table that I absolutely loved.”

For the next few months after that visit, Pan worked in his kitchen in Washington to recreate the flavors and textures he’d tasted in his family’s recipe.

“Today, Pan’s Mushroom Jerky is produced in Portland, Oregon, and is available in over 700 stores in the United States,” the website reads. “We are so grateful for all of the support we’ve received, and we hope you fall in love with this unique and tasty snack!”

It’s likely that having that wide of distribution will be attractive to the Sharks in the Shark Tank, as that’s something they may not have to help with, depending on the costs.

5. The Jerky Is Available in Four Flavors

At the time of writing, Pan’s Mushroom Jerky is available to purchase in four flavors.

The jerky is available in the original flavor, in a Zesty Thai flavor, an Applewood BBQ flavor as well as Salt and Pepper flavored. It can also be purchased in a variety pack, which includes one of each flavor for $28 on the Mushroom Jerky website.

Tune in to Shark Tank to see if Michael Pan can get a deal from one of the investors.

READ NEXT: Prime 6 Charcoal on Shark Tank: 5 Fast Facts You Need to Know