DAEJEON, South Korea — Ko Bi-song hopes the public health crisis that nearly cratered her business will later be the force that revives it.

For 14 years Ko has run Keumjung Tapgol Farm, which produces traditional Korean red pepper and fermented bean paste, flavorings used in many staple dishes. Since the start of the coronavirus pandemic, Ko’s sales have tumbled, as fewer people held dinner parties or exchanged gifts over holidays.

Her company is located in the quiet outskirts of the central city of Daejeon and has received financial assistance from the local government, which has helped her stay afloat. She hopes for a post-pandemic boom as more people select foods that boost their immune systems.

“I think the future of our business is bright because we produce healthy food items, and people are getting more concerned about their health after COVID,” Ko told Nikkei Asia.

The pandemic has pushed her to strategize about the future: Once it is safe to do so, she plans to organize events at her farm where she can teach customers how to make premium traditional foods, and she is working to build channels to export her products.

Ko’s small business, which operates only in the domestic market, is typical of those hit hardest by the coronavirus pandemic. And like Ko, the South Korean government is scrambling to find an economic model that can both withstand the pandemic and usher in a prosperous future. Lim Yong-ku sells fish at Yuseong Traditional Market in Daejeon, South Korea. His sales are down roughly 40% since the pandemic started, but expects demand at his shop to gradually improve. (Photo by Steven Borowiec)

On one hand, South Korea’s economy has weathered the shock from COVID-19 better than most. Through multiple rounds of stimulus spending, the government has limited the overall economic damage to a contraction of 1% in 2020, the country’s worst performance since the financial crisis of 1998, but far less dire than other developed economies.

Other economic indicators tell a grimmer story. South Korea’s unemployment rate hit a 21-year high of 5.4% in January, shedding 982,000 jobs from a year earlier, the steepest decline since 1999. The finance ministry said that businesses affected by social distancing restrictions, such as hotels, food service and retail, were particularly hard hit.

To address the difficulties faced by households and small businesses, the left-leaning administration of President Moon Jae-in has carried out three rounds of stimulus spending worth more than $27 billion.

The government’s fiscal stimulus appears not to have spurred a sustained increase in private consumption, an elusive goal of South Korean governments seeking to narrow the gap between the large conglomerates that dominate the economy and smaller companies, such as Ko’s, that rely on domestic demand.

According to data from the Korea Economic Research Institute, private consumption fell 4.4% in the first three quarters of 2020, while government spending rose by 5.8%. In the center of Daejeon, South Korea’s fifth-largest city, with a population of 1.46 million, government buildings and office towers line broad avenues. The Galleria shopping mall gleams nearby. Across town, near the city’s main train station, the blocks are filled with dusty single-story retail outlets and eateries.

Municipal governments in South Korea have in recent months banned gatherings of more than four people and ordered restaurants and bars to close at 9 p.m. or 10 p.m., making it all but impossible for many mom-and-pop stores to turn a profit.

In some ways the contours of Daejeon mirror those of the country as a whole. “In this city, there’s a small portion of the population making stable livings with the government or universities, while the majority is having a tough time trying to run their own businesses,” Lee Gwang-jin, an activist in the Daejeon branch of Citizens’ Coalition for Economic Justice, told Nikkei Asia.

“Inequality is getting worse in the city. Many small businesses were on the verge of closing even before the pandemic,” Lee said. Yang Song-wu operates an internal medicine clinic in central Daejeon and said that since the early stages of the pandemic he has noticed a sharp increase in patients with high blood pressure and other ailments associated with intense stress.

“They can’t sleep properly because of stress, and they can’t afford to buy decent food so they eat unhealthy stuff from the convenience store, and their gyms are closed so they can’t exercise,” Yang said.

To stop the economic bleeding, Moon’s ruling Democratic Party is planning another stimulus package but it is currently in a standoff with the finance ministry, which argues more spending will strain state finances at a time when debt is rising and tax revenues are falling. Critics argue that the Moon administration’s measures will do little to create sustained growth, and are little more than populist gestures meant to curry favor ahead of key mayoral by-elections in the country’s two biggest cities, Seoul and Busan, in April.

“The government has already done too much to interfere in the economy and should at this point ease regulations,” Lee Byung-tae, a professor of business administration at the Korea Advanced Institute of Science and Technology, told Nikkei Asia.

“Because it’s so hard to fire employees, even if the employee is underperforming, companies are reluctant to hire. Liberalizing labor laws would incentivize the big companies to hire more during the pandemic,” Lee said.

“When the Moon administration started and announced plans to create new jobs, really what that amounted to was plans to expand the civil service, which doesn’t seem very productive. Their job-growth plan didn’t seem to be anchored in some longer-term strategy,” said Anwita Basu, head of Asia country risk at Fitch Solutions.

“The government can afford the extra spending, but from a productivity perspective, little has been done,” Basu said.

Daejeon has been a focal point of government efforts to foster manufacturing and tech companies, with state funds set aside to create a startup park. Some 47.5% of the government’s research and development budget has been spent in Daejeon over the past five years. In a 2019 visit to Daejeon, President Moon declared the city “Korea’s scientific and technological pioneer.”

That same year, Daejeon and the nearby administrative city of Sejong had the highest regional gross domestic product growth among South Korean cities, at 3.3% and 6.7%, respectively. 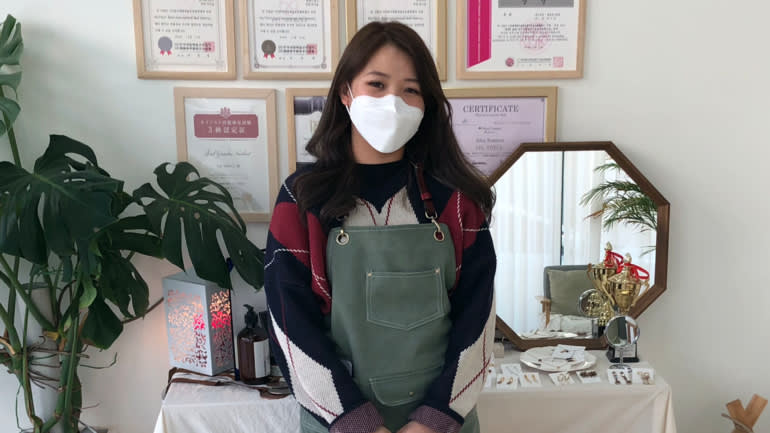 Ha Yi-seul at her Nail Classic salon in Daejeon, South Korea. “[People] come in to get their nails done, but also for someone to talk to, to relieve their stress,” Ha tells Nikkei Asia. (Photo by Steven Borowiec)

Despite these impressive numbers, young people in the city still point to a lack of jobs. Even in a tough climate, more young people are starting their own small businesses, said Ha Yi-seul, 26, who opened Nail Classic, a salon in Daejeon in February last year.

She said developing a base of regular customers has allowed her to stay afloat. Her shop is located in an area with several large apartment complexes and she said mothers of young children are her main clients. “They come in to get their nails done, but also for someone to talk to, to relieve their stress,” Ha said. “And it seems like with the restrictions throughout the city, they were less likely to go somewhere else, and more likely to spend money close to home.”

In the far west of the city is Yuseong Traditional Market, a ramshackle outdoor gathering of merchants selling produce, seafood and meat products direct from suppliers. Before online shopping and large supermarkets, such markets were where most Koreans bought their groceries. But nowadays, they are shrinking or disappearing from most cities.

Lim Yong-ku has sold dried fish in the market since he lost his job at a transportation company in the financial crisis of 1998. His sales are down roughly 40% since the pandemic started.

He said Koreans are accustomed to cycles of crisis and recovery, and expects demand at his shop to gradually improve. “Our business is down for now, but more people will come eventually,” he said. “Everyone still needs to eat.”