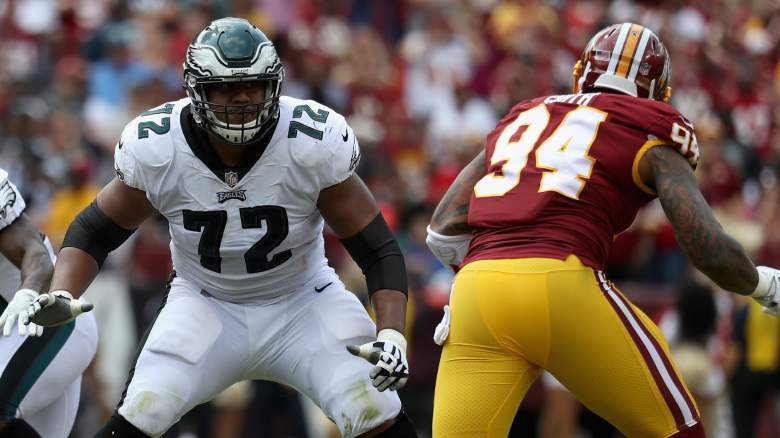 Halapoulivaati Vaitai has been a valuable backup and sometimes starter in Philadelphia for four seasons.

The Detroit Lions have been injury plagued at key positions so far this season, and another name has gone to the team’s injured reserve as a result which will create a hole on the offensive front.

Wednesday, the Lions revealed they had placed guard Halapoulivaati Vaitai on injured reserve with a foot injury which had been plaguing him most of the season. Wideout Mohamed Sanu comes on the active roster as a result, and the Lions will now move forward for the foreseeable future without one of their biggest signings from a year ago.

🔷 Signed WR Mohamed Sanu to the active roster from PS

So far this season, Vaitai has not impressed with his play after signing the whopping five year, $45 million dollar deal with the team this offseason. He’s been in and out of the lineup and has struggled, appearing to get benched last week. The reasoning behind this could have plenty to do with Vaitai’s foot trouble, which has now come to a head given he will be taking a seat on IR for the team.

The hope is Vaitai can use the team to get healthy, because he will be on the books for the next few seasons and the Lions will need to get consistent play out of him at some point in order for the signing to not be considered a colossal bust moving forward.

Lions Injuries Piling up for 2020

Detroit has struggled with the injury bug lately this season, as they have a jam packed injury report ahead of Week 12 on the field. Names such as Kenny Golladay, Da’Shawn Hand, Desmond Trufant, Trey Flowers and D’Andre Swift have missed time this season at various points, and now, Matthew Stafford is being forced to try and play through a tough thumb injury the rest of the way.

Vaitai has done his best to try and play through his own foot ailment, but it’s long looked like something has been up with him for the last few weeks. Now, he’ll sit down and join a lengthy list of players who are ailing the rest of the way.

Vaitai, out of TCU, is only 26 years old and has 20 career starts under his belt from his time with the Eagles which is where he started his career. Vaitai has also played in 55 NFL games in his career, and was a former fifth round pick of the Eagles from back in 2016.

Vaitai helped the Eagles win Super Bowl LII a few years back, and is an up and coming lineman in the league given these facts. A big selling point when he came to Detroit was his ability to play either tackle spot or guard, even though Vaitai is an offensive tackle by trade. In Detroit, he’s done a bit of both so far but been used at guard most regularly. The results haven’t been great thus far, but that could have plenty to do with his injury and how he’s never quite been himself this season since joining the team.