Legend of Zelda: EVERY Handheld Game, Ranked by Critics 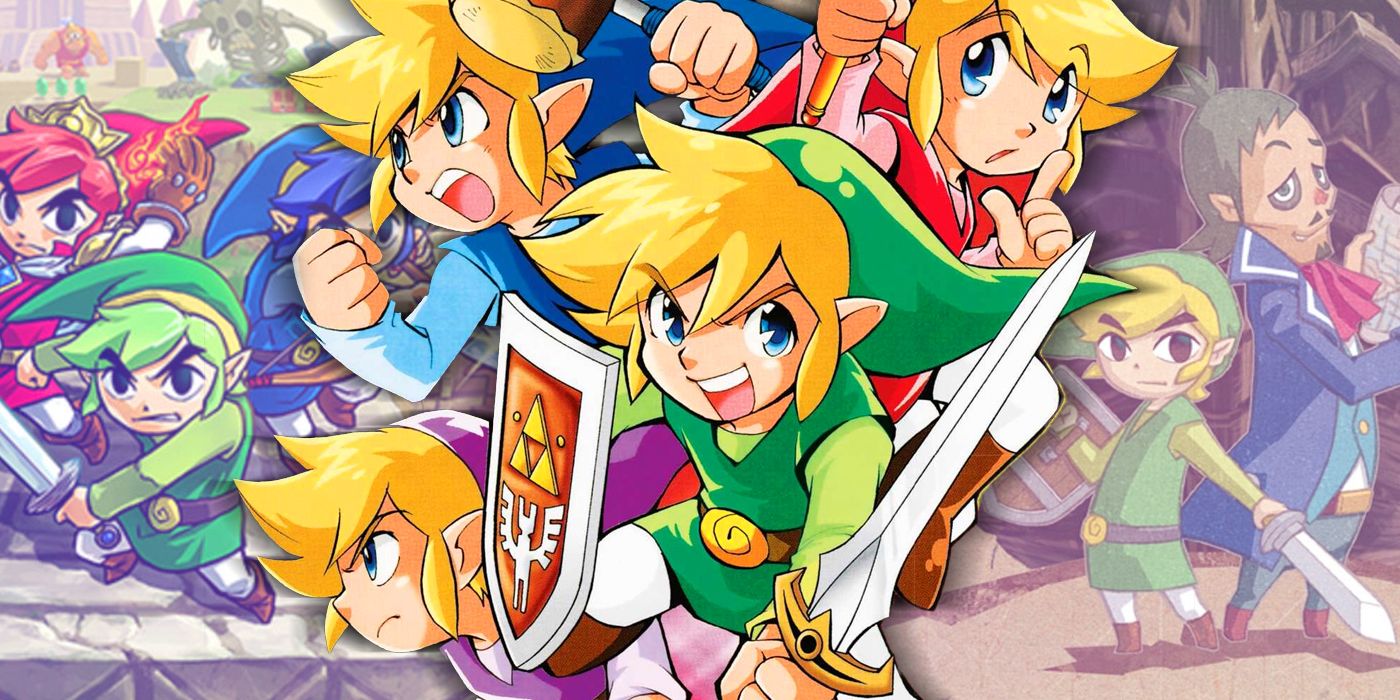 While Nintendo’s iconic The Legend of Zelda video game franchise may have started on home consoles 35 years ago, the series has had a healthy line of titles on Nintendo’s various handheld consoles for the past 28 years. And just as we provided a comprehensive ranking of the home console installments based on professional critics’ scores, it’s only right to do one for all the handheld console entries to commemorate the fan-favorite franchise’s 35th anniversary.

Rankings are based on professional critics’ scores compiled on review aggregate site GameRankings, listed from lowest scoring to highest. Enhanced remakes of Ocarina of Time and Majora’s Mask are not included here, as both were originally released for home consoles.

RELATED: Zelda: Skyward Sword Requires a Remake – NOT a Remaster

The second and final original Zelda game released for the Nintendo 3DS was 2015’s Tri Force Heroes. A direct sequel to A Link Between Worlds, the game has three Links arrive in the fashion-obsessed Kingdom of Hytopia to rescue a princess from a garish enchantment, with the three working together to save the day.

Continuing on the multiplayer gameplay that had been part of the franchise for over a decade, Tri Force Heroes reduced the number of playable characters from four to three and boasted online multiplayer as opposed to requiring link cables between handheld systems. Critics were divided on the online functionality of the game, but praised the multiplayer gameplay. However, criticism was leveled at the single-player mode and the game not providing a two-player mode, requiring a full trio for online gameplay.

The origins of Zelda incorporating multiplayer began with 2002’s Game Boy Advance port of A Link to the Past, with the game including the bonus, multiplayer-only game Four Swords. Drawing the mythical Four Sword from its pedestal, Link is split into four copies of himself, working together to save Zelda from the monster Vaati.

RELATED: Are Miis Making a Comeback on Switch?

While critics were impressed by the multiplayer gameplay, the necessity for each player to have their own copy of the game and lack of single-player was criticized. Most of the praise was awarded to the A Link to the Past port, lauding the transition of visuals to a handheld system while criticizing the sound design. Four Swords was rereleased for a limited time on the 3DS eShop, with the port similarly praised.

The last Zelda game released for the Nintendo DS was 2009’s Spirit Tracks. Here, players used a steam locomotive to navigate the overworld of New Hyrule, while traditional gameplay was featured in villages and dungeons. As aspiring train engineer Link and Zelda investigate the mysterious Spirit Tracks, they take on the evil Demon King Malladus.

While the locomotive mechanic was criticized for being tedious and the game’s overall environments not quite reaching the franchise’s standards, critics praised Spirit Tracks for being a wonderful (if somewhat formulaic) entry in the venerable series. The mechanic of Zelda possessing Phantom Guardians in dungeons and making her an active participant in the adventure was praised, as well as Spirit Tracks being the first game in the series to feature multiple endings depending on player choices.

RELATED: Zelda: Breath of the Wild – These 4 Classic Items MUST Return for the Sequel

The direct sequel to 2002’s The Wind Waker on the GameCube, 2007’s Phantom Hourglass on the DS had Link team up with Captain Linebeck to rescue his friend Tetra from the sinister Ghost Ship. Using Linebeck’s steam paddler, the heroes navigate the Great Sea, revisiting the Temple of the Ocean King on multiple occasions to gain more secrets about the oceans and a way to save Tetra.

Critics enjoyed the returning to the acclaimed world of The Wind Waker for the DS title, but reception on exploring the same dungeon multiple times divided reviewers, with some finding it tedious. Critics similarly were divided on the easier difficulty level and online functionality, but praised the franchise arriving on the Nintendo DS.

The final Zelda game released for the GBA was 2004’s The Minish Cap, with Link gaining a magical hat that allows him to shrink down to the bug-sized Minish. Link can use Kinstones to change the layout of certain items across Hyrule while the story explores the origins of Vaati and the Four Sword as a prequel to Four Swords.

While critics praised The Minish Cap for being a classic Zelda title that took the GBA hardware as far as it could go with vibrant visuals and an impressive sound design, the biggest complaint centered around the game’s length. Critics cited that seasoned Zelda players would be able to clear the dungeons and overall game in a matter of hours.

The first handheld Zelda game was 1993’s Link’s Awakening, released for the original Game Boy. It was quite a departure for the series at the time. There was no appearance from Princess Zelda or the Triforce, and it wasn’t set on Hyrule, with Link crashing on the mysterious Koholint Island while traveling to distant lands to train should Ganon return after the events of 1992’s A Link to the Past. Trapped on the island, Link was tasked with awakening the Wind Fish to escape.

Beginning as an unsanctioned pet project by A Link to the Past‘s development team to see if they could port the Super Nintendo game to the Game Boy, Link’s Awakening grew into its own title with greater creative control over its story based on its origins. The game was widely praised for seamlessly transitioning the franchise to handhelds while retaining its core appeal. A colorized remaster, Link’s Awakening DX, released for the Game Boy Color in 1998, improving the graphics and adding a new dungeon. An HD remake was released for Nintendo Switch in 2019, with both versions similarly well-received.

RELATED: Link’s Most Talkative Appearance Is in… Animal Crossing?

Described as the spiritual successor to A Link to the Past and bearing many similarities in regards to art design and gameplay mechanics, 2013’s A Link Between Worlds for the 3DS featured a loose retread of the classic game’s story. When a young blacksmith named Link encounters the evil wizard Yuga, he finds himself crossing between Hyrule and its dark counterpart, Lorule, using a bracelet to take on the form of a living painting to help him navigate the two worlds.

In a radical change from previous installments, A Link Between Worlds featured a nonlinear progression, with players allowed to swap out items and complete dungeons in whichever order they wished. Critics lauded both changes to the established formula, giving players additional freedom to explore, and the heightened difficulty for puzzles in the dungeons. The art design and soundtrack were also praised.

RELATED: Legend of Zelda: How to Set Up Ocarina of Time Multiplayer

2001 gave Zelda fans plenty to celebrate with the release of not one but two Zelda titles for the Game Boy Color launched simultaneously. Oracle of Seasons had the dancer Din invites Link to the land of Holodrum where Link has to traverse a land of shifting seasons to battle agains the villainous General Onox. Originally envisioned as a trilogy of games, Nintendo decided to narrow down the focus to two titles instead, with the link cable allowing additional content and replayability. While the sound design on both games were criticized, the color palette employed for Oracle of Seasons was particularly lauded.

Oracle of Ages had Link travel to Labrynna to rescue Zelda’s handmaiden Impa while facing Veran, the Sorceress of Shadows. Teaming up with the singer Nayru, Link explored a world where the flow of time had gone haywire and sought to save Labrynna’s past and present.

Oracles of Ages just edges out Oracle of Seasons in the critical reviews, with its time flow mechanic and level design more warmly received than the seasonal changes in its counterpart. Critics also praised the bonus dungeon and true villain Twinrova when both games were interfaced through link cables or password.

KEEP READING: A Link to the Past Should Be Coming to Switch – NOT Skyward Sword

Persona 5 Strikers: How Long to Beat & Complete the Game

Sam Stone is a 10th level pop culture guru living just outside of Washington, DC who knows an unreasonable amount about The Beatles. You can follow him on Twitter @samstoneshow and ask him about Nintendo, pop punk, and Star Trek.