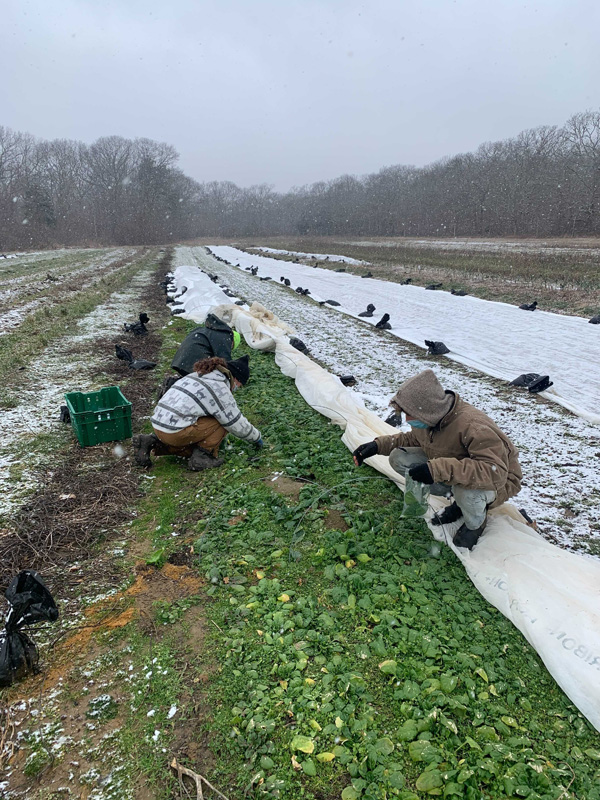 As the growing season approaches, Island Grown Initiative (IGI) is working on a number of projects to maximize production and access to fresh, healthy foods for the Vineyard. Laura Seguin, the development and communications coordinator for IGI, told The Times that now that IGI has merged with the Island Food Pantry and is moving the pantry location to the Portuguese-American Club in Oak Bluffs, food professionals at Thimble Farm are planning on ways to fill that space with locally grown produce.

The new pantry location will be operational beginning Feb. 22.

“We are still in the process of moving,” Seguin said.”Because the layout of the P.A. Club is so open, it creates a more streamlined and accessible experience.”

Originally, the model for utilizing the food pantry gave folks the choice of what foods they wanted to take, but the pandemic forced them to transition to a curbside pickup model. Now, people will actually be able to enter the building and shop for their food.

“We will now be able to offer socially distanced shopping within the facility, and it also doubles the amount of fresh and frozen food we can offer to our clients,” Seguin said.

IGI is also increasingly active in Island schools. Whereas IGI originally had lots of in-person, hands-on programming for schools, much of that was forced to close because of COVID.

But now, IGI is preparing the school gardens for the spring, working on programming, and will be offering backyard grower workshops for folks who want to bolster their food independence and resilience.

“More people are planting gardens as a result of the pandemic — these workshops are really setting people up for success,” Seguin said.

She added that IGI is continuing its partnership with Slough Farm through the Slough Farm suppers program, which seeks to address food insecurity on-Island. “The goal of that is to provide locally sourced meals to food-insecure Islanders, while also supporting the Island food system,” she said. By sourcing food from farmers, fishermen, and kitchens across Martha’s Vineyard, the program helps keep those establishments open while providing for people in need.

In January, Seguin said, IGI produced and distributed more than 2,000 meals from Sweet Bites, the Larder, and the YMCA Cafe.

Those meals are picked up and delivered to the Island Councils on Aging, the Wampanoag Women’s Center, Serving Hands, the Food Pantry, Island libraries, and Martha’s Vineyard Community Services.

Food is also distributed to those with medical hardships who have difficulty shopping for food or cooking healthy meals for themselves.

On the farm-centric side, senior program director for IGI Noli Taylor said Thimble Farm continues to work on creating a regenerative and equitable food system.

To prepare for the growing season, Taylor said, farmers and food professionals are looking at ways to continue improving the soil at the farm, which is the basis for a regenerative food system.

New methods for regenerative agriculture include utilizing foliar sprays to boost plant and soil health, and experimenting with a composting system called the Johnson-Su Bioreactor.

Taylor added that the farm is planning on drastically increasing the diversity of crops they grow during the upcoming season. “This year we grew thousands of pounds of one kind of butternut squash, but next year we are growing 10 kinds of winter squash,” Taylor said.

Thimble Farm is also planning new tools and systems to reduce the amount of labor that goes into regenerative farming.

Because the farm doesn’t use tillage to prepare beds for planting, they instead utilize tarps and landscape fabrics, which keep soil life undisturbed. But those tarps are ungainly and heavy, and the farm grounds can be windy — making moving the tarps labor-intensive. A new design is being developed for a tarp winder that will make moving the tarps much less work.

Farm engineers are also working on a portable pigpen to move pigs across the property. Taylor explained that putting animals in the vegetable crop locations is another fundamental part of regenerative farming.

“Pigs are amazing for that, but they can also be hard on the soil, because you have to move them a lot,” Taylor said. The portable pen allows pigs to be moved across the property with minimal impact on soil.

As IGI focuses on boosting growing volume, it is increasing acreage and growing space in greenhouses. Through funding from the Martha’s Vineyard Community Foundation and the Slough Farm Foundation, Taylor said, IGI is finishing up the addition of three new cooler spaces in the equipment barn, which will drastically increase storage capacity.

One of IGI’s goals is to better reflect the diverse food cultures of the Island. With this objective in mind, it is planning on growing jiló and okra, which are popular crops from Brazilian food culture, as well as callaloo, a popular Jamaican crop. “We will be able to provide those crops to the Food Pantry, the Mobile Market, and all of our food outreach,” Taylor said. “It’s all about celebrating and elevating different food cultures of the Island.”

Food education is central to IGI programming, and Taylor said she is happy to report that the group has been sticking with its Island Grown Schools offerings, including activities, healthy recipes, and other virtual educational opportunities. IGI also has an Island Grown at Home newsletter, which provides fun and interactive learning opportunities for the whole family.

According to Taylor, the pandemic has shown how fragile the industrial food system is, and how susceptible the Island is to food insecurity.“We want to help people grow their own food and become more food-independent,” Taylor said.