If You’re Going To Eat Dairy On Keto, These Are The Most Keto-Compliant Kinds 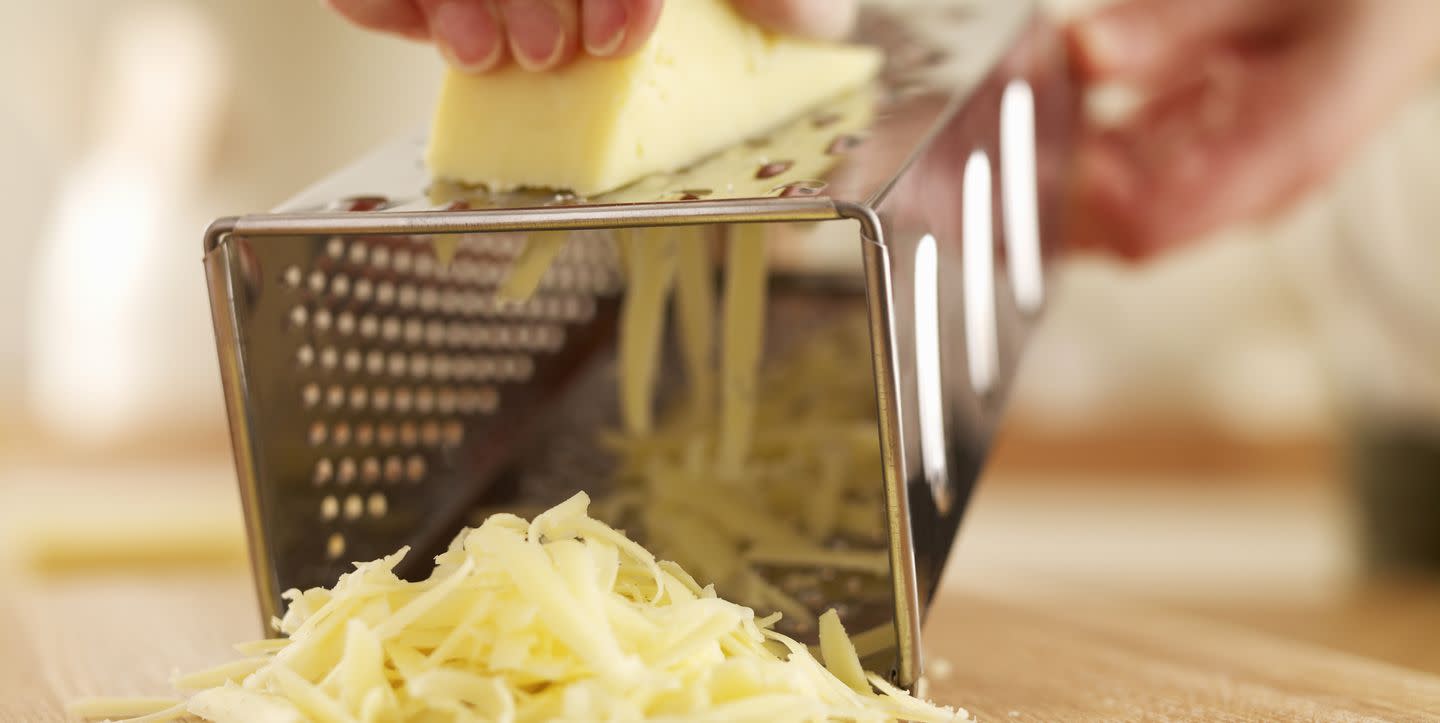 If you’re familiar with the keto diet by now, then you know it’s based on swapping your body’s main and preferred source of energy from carbohydrates to fat. By consistently eating a diet very low in carbs, high in fat, and moderate in protein, your body will go into ketosis—which can result in weight loss. But the diet can be a bit trickier to maintain than a simple definition lets on—especially when it comes to certain food groups, like dairy.

From the outside looking in, it might seem like the keto diet is essentially a free pass to eat all the butter, cheese, and heavy cream your heart desires. But before all you dairy devotees out there jump on the trend train, a little FYI: Keto is not exactly an ice cream-filled dream.

If the dairy you choose to eat has minimal carbohydrates and is without added sugar, you can enjoy it within the bounds of a keto diet. But if your dairy products contain too many carbs (coming from lactose) or have an abundance of added sugar, it can throw you out of ketosis and set you back in your goals, explains Tracy Lockwood Beckerman, RD, author of The Better Period Food Solution. “A keto follower has to be mindful, read nutrition labels, and be their own detective to stay in ketosis,” Beckerman says.

Here’s everything you need to know about eating dairy on keto.

So, can you have dairy on the keto diet?

Yes, with caveats. It’s a little complicated like, you know, everything in life these days.

Some dairy products are actually great sources of protein, fat, potassium, and calcium, and make a lot of sense for keto. But the keto diet’s actually a bit more restrictive when it comes to other dairy foods—and that’s due mostly to one thing: Dairy equals sugar, which equals carbs. Let’s break down some pros and cons of eating dairy on keto.

Pros of eating dairy on the keto diet:

Cons of eating dairy on the keto diet:

So which dairy foods don’t work on a keto diet?

A quick look at the nutrition facts can help you determine which dairy products might be a do and a don’t. For instance, higher-carb dairy products like ice cream and flavored milk will have a higher sugar content compared to something like a cheese or plain milk, explains Hillary Pride, RDN, LD, NASM-CPT, registered dietitian and certified personal trainer in Portland, Maine.

“It really comes down to looking out for added sugar,” Pride says. “Some sweetened yogurts can pack close to 40 grams of carbs per serving, so they may have to be enjoyed in smaller portions or swapped for a lower-carb alternative.”

So, to make navigating the dairy aisle easier, remember these dairy are generally no-nos in large amounts on keto:

What are the best dairy foods for keto dieters?

Butter is an ideal source of fat on the keto diet, says Tammy Lakatos Shames, RDN, of Nutrition Twins. That’s because it has zero carbs and about 11 grams of fat per tablespoon, she says.

If you’re set on incorporating butter into your keto lifestyle (and honestly why wouldn’t you be?), buying high-quality grass-fed butter, which is higher in omega-3 fatty acids—an essential, healthy fat for your body and brain—is the best option, per Pegah Jalali, RD, a nutritionist with Middleberg Nutrition.

Cheese gets the green light on the keto diet. But if you’re worried about your lactose intake, then Keatley says you’ll want to go for harder cheeses, like Parmesan, which typically have fewer carbs than soft cheese, explains Lyssie Lakatos, RDN, of the Nutrition Twins.

Semi-hard cheeses—like Swiss are keto-friendly too, Lakatos adds. Take a cue from Jenna Jameson and melt some semi-hard cheese over some eggs for breakfast (or honestly, whenever). And while, yes, hard (and semi-hard) cheeses do have fewer carbs than soft cheese, that doesn’t mean all soft cheeses are off the table.

Brie cheese, for example, has less than a gram of carbs per ounce, per the USDA. Mascarpone and creme fraiche are good options too, says Lakatos, since they give you tons of added flavor and creaminess for very few carbs.

Here’s the thing: Milk isn’t a great option on the keto diet, says Jalali. Whole milk has 12 grams of carbs per cup, and low-fat or skim has even more. And don’t even get me started on ice cream (way too much sugar).

Cream, on the other hand—whipping or whipped—is totally doable on the keto diet.

But be mindful of how much you’re consuming. Nutritionally speaking, overdoing it on the whipping or heavy cream is not a wise decision, Beckerman warns. “Although delicious and keto-friendly, it’s not the most nutritious option, as it’s laden with a ton of calories, saturated fat and is low in valuable protein,” she says. The RD recommends sticking to 1 tablespoon per day.

Now if it’s whipped cream you’re after (and not whipping cream, to add to your coffee), due to the mere lack of nutrition, you should aim for the serving size of 2 tablespoon per day, Beckerman says. “That’s because it’s mostly void of valuable nutrition and can heighten ferocious sugar cravings,” she adds.

But if you’re really in the mood for a dollop of whipped cream, it might be best to, uh, whip it up yourself (one cup of the whipped stuff has under 4 grams of carbs and just over 43 grams of fat), since most store-bought versions have added sugar. To do that, all you need is heavy whipping cream, a hand mixer and a mixing bowl, and you whisk until the cream becomes fluffy. Add a pinch of pure vanilla extract for some flavor.

Cream cheese is another keto-friendly food…as long as you don’t spread it all over a bagel.

But, at just 1 gram of carbs per ounce, per the USDA, you can absolutely enjoy a bit spread on celery stalks or halved strawberries, says Jalali—or, if you’re feeling creative, you can add it to any sauce to make it a bit creamier (and fattier).

All three of the dairy products are grouped together because they have similar carb content—about 11 grams of carbs per cup, per the USDA. So, these are doable, as long as you keep your carb content in check, says Lakatos (so, maybe have half a cup with keto-friendly berries instead of a full cup).

There is, however, one hack that many keto dieters use: “A common keto hack for yogurt is to make keto yogurt by mixing one part tangy sour cream—Wallaby Organic European Cultured is my fave—with one part heavy cream,” says Jalali. “This combination will have less carbs and higher in fat than traditional yogurt.”

Can you do keto without dairy?

Absolutely, Pride says. You can totally be dairy-free and do keto. You just need to know which swaps are smart swaps—like unsweetened almond milk for regular ole dairy milk and plant-based yogurts for usual dairy yogurt. That being said, however, “you still want to be sure you’re looking for unsweetened or no sugar added options to make sure the products fit your needs,” Pride explains.

Equally as important? Making up for any lost nutrients (calcium, protein, potassium) that you might’ve previously been getting by your yogurt, dairy, and cheese consumptions. For calcium, Pride says to consider sardines, tofu, kale, and fortified almond milk and for potassium, avocados, spinach, salmon, and edamame. And let’s not forget about keto’s big player: fats. To keep up with those sans-dairy products, go for nuts, avocados, seeds, and plant-based oils.

Now, not to be repetitive or anything, but just to make sure it’s clear: You don’t need to ditch dairy entirely if you want to do keto. In fact, there are plenty of dairy options that will fit in with your 50-grams-of-carbs-a-day (or fewer!) lifestyle, Jalali says.

“All foods are basically allowed on the ketogenic diet, it is a matter of the portion,” she says, adding that that means you might have more wiggle room with certain dairy products, like butter and heavy cream, but not so much with others, like milk or ice cream.

“As a whole, it’s best to always read labels and nutrition facts to get the full story on a dairy product before diving in,” Beckerman says. That same cottage cheese, sour cream, and cream cheese mentioned earlier can quickly become non-keto compliant if they have added sugar. Don’t let marketing fool you. Be your own detective when it comes to choosing products, Beckerman warns.