Here’s what returning to school will look like in Portland 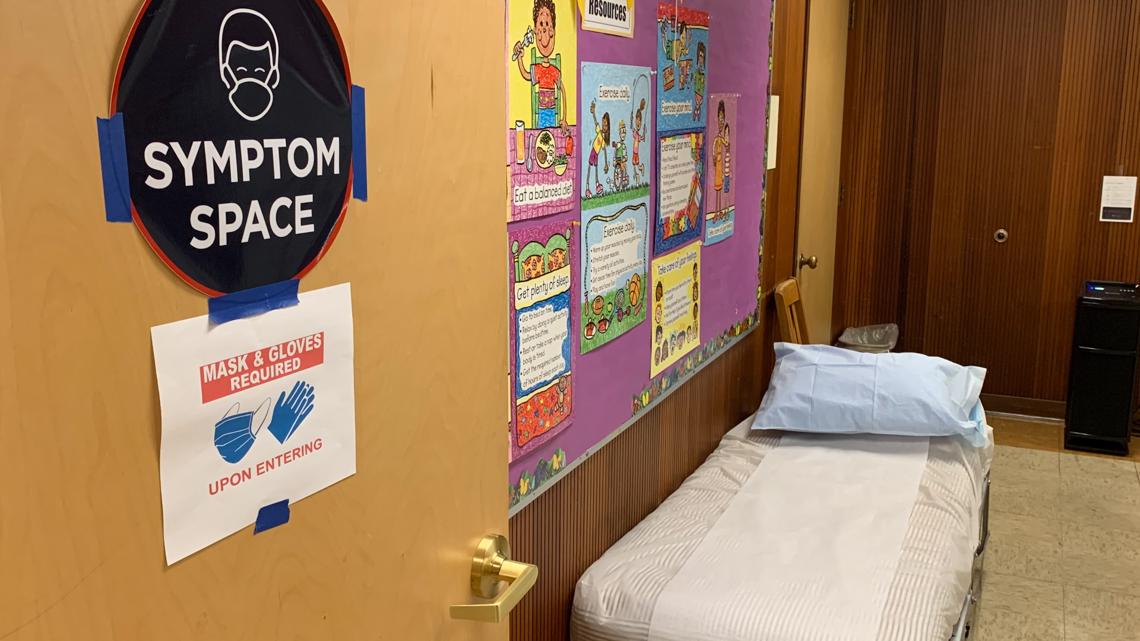 KGW tagged along on a tour of a Portland elementary school to give parents an idea of what hybrid learning might look like.

PORTLAND, Ore. — The deadline for schools in Oregon to begin offering hybrid or full in-person instruction is coming up next week, which means many school districts are busy preparing.

At Jason Lee Elementary, district and school leaders gave a tour highlighting safety precautions as they get ready to start hybrid learning. KGW tagged along to give parents an idea of what it’ll look like.

Outside the building there are bright signs telling people not to enter if they’re sick. Once inside the building, a staff member is expected to do a visual check of students and ask if they feel OK. There are many of the same safety protocols we’ve seen for limited in-person instruction, such as visitors signing in for the purposes of contact tracing, signs reminding kids to stay physically distant and to wash their hands as well as wear a mask, and arrows telling students which way to walk in the hallways.

“We really want to reduce the number of students coming into the building from every entrance, so we spread it out around the building. Each entrance is assigned to a grade level,” said Alma Velázquez, principal at Jason Lee Elementary.

If kids need to use the restroom during the day, Velázquez said each bathroom is assigned to two grade levels.

“We have as many students in the bathroom as there are stalls,” she said.

Next, Velázquez took those in the group into a classroom that’s already been used for limited in-person instruction.

“When they [students] enter, you’ll also see we have bucket of wipes, hand sanitizer,” said Velázquez.

Classrooms may have 13-16 students. At the elementary level, students taking part in hybrid learning will stay in class for two hours and 15 minutes. After that, they will head home to work on assignments.

This will be the case four days a week, with Wednesday being utilized for teacher preparation while students learn on their own at home.

When it comes to students being inside classrooms, many parents have voiced concerns about ventilation.

“We’ve taken a three-prong approach to increasing ventilation within schools,” said Dan Jung, chief operations officer for Portland Public Schools. “The first one is assessment and maintenance, so we’ve had third party assessments complete. Those were completed, I think, in early January.”

“Any deficiency that was identified, we have gone through and addressed those deficiencies and we’re starting all over again April 1,” he said. “We’re gonna start all over again, doing assessments throughout the district.”

The second part of ventilation is making sure airflow is adequate in buildings.

“We have modified the systems to increase the amount of outside air that comes into the buildings,” said Jung. “We run our systems longer each day. So, we’re running about four hours longer than we normally run them and then we run them continuously through the day so they don’t turn off the entire day.”

He said when it comes to air filtration, the district has about 8,000 different filters.

“We’re going through and all the ones we’re able to upgrade to a higher filter type, we’re doing that,” Jung said. “However, not all of our filters or systems are able to handle that. So, that’s why we’ll be putting the portable HEPA air filters in every single classroom and all those will be in before hybrid begins.”

Jung said there will be enough HEPA air purifiers for every classroom in the district, including the ones with windows that don’t open.

When asked whether outdated classrooms with only the HEPA air purifier in place is comparable to other classrooms with working windows and updated HVAC systems, Jung said the district asked a similar question to both air flow and public health experts. Ultimately, after changes were made, Jung said both public health officials and certified industrial hygienists determined the district’s measures were effective.

“They’ve been very supportive of the efforts we’ve put in place,” said Jung.

What happens if someone has COVID-19 symptoms?

Kids or staff who show COVID-19 symptoms can go to a room called a “symptom space,” where students can wait to get picked up.

“It will be staffed the whole time students are here, by our student health assistant. And once a week we also have a nurse from the county who is assigned to our school as well,” Velázquez, principal at Jason Lee Elementary, said.

She said throughout the last month or so of limited in-person instruction, no one has had to utilize the room.

“I think the systems are working to make sure people are showing up healthy,” said Velázquez.

Portland Association of Teachers president Elizabeth Thiel was also present. Thiel said it’s been a complex task to reorganize how to teach, and throughout the shifting workflows teachers have worked hard to keep up with the changes.

“It’s a huge undertaking happening right now as teachers are trying to understand what this will mean for students and one of the most consistent messages we’ve had from educators across the district and questions is, ‘How do we do this in a way that’s equitable for the students who are staying in distance learning and students who are here in the classroom?’ That is a central question that I think we’ll be continuing to grapple with,” said Thiel.

She said under the union and district’s agreement, the district will work with educators as much as possible to make sure there are remote-only positions for educators who need it.

“At this moment folks are working to create those options, to figure out ways to do that within the school community, and if not, if there’s reassignments,” Thiel said.

KGW asked Thiel a question we’ve received from parents regarding the possibility of using a camera in classrooms for simultaneous teaching, where students at home would attend class virtually at the same time as in-person students. She said teachers have been clear they don’t believe simultaneous instruction meets the needs of kids at home or in school because of the split attention required.

“We did talk about it quite a bit earlier this year and while it might sound like simultaneous means the same, I think educators’ perspective was really that if students at home are sort of watching what happens in class, that’s not the same as what they’re doing now which is interacting directly with kids through the screen, talking to them,  texting with them, answering their questions directly,” said Thiel.

Equity and community is top of mind for Velázquez as well.

“We want to ensure that students that are not opting into hybrid learning have a very similar experience virtually as much as possible,” she said. “Our schedules are going to mirror each other, their access to their teachers will be for the same amount of time … they’ll have access to our counselor the same way.”

In the meantime, Portland Public Schools superintendent Guadalupe Guerrero said the district has made investments in social workers, counselors and other support staff. He said he knows there are many diverse perspectives regarding what schools should be doing.

“We have to do our best to balance what the facts are, what the science tell us, and we don’t have to make judgements,” Guerrero said. “There we have government agencies that make those determinations and issue those guidelines and we try to create a viable model to implement, given what the guidelines are at that time. And that’s been what we’ve been working on for the last several months.”

Parents are being asked to check their kids’ health before they head to school.