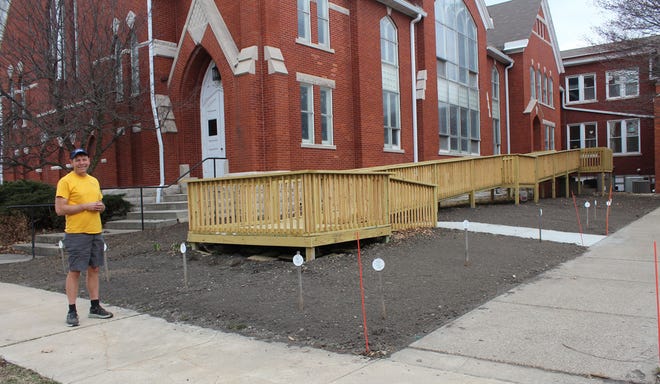 MACOMB — Genesis Garden has been active in tackling healthy food scarcity in the McDonough County region for many years, but they’ve scaled up their efforts significantly since the beginning of the COVID-19 pandemic.

The non-profit organization offers the public a variety of different programs, all of which are in the midst of expansion, according to Genesis Garden Executive Director John Curtis. He said that the organization plans to renew Kids Cook, a summer curriculum that teaches kids how to cook from home. They provide kids with kitchen tools, recipes, ingredients, training videos, and personal coaching to ensure success.

Curtis said that this year’s program will have shorter lessons, but that he hopes to see even more students sign up. There were 83 kids who enrolled in the program last summer, Curtis said.

Genesis Garden’s summer meals program has seen significant growth, some of which Curtis attributes to a partnership with the Macomb School District and Superintendent Patrick Twomey. In 2019, Curtis said that they were serving about 300 hot meals per week. Last year, that number spiked to 8,000 per week. Curtis hopes that Genesis Garden can serve even more McDonough County children in 2021.

The organization stepped up to the plate during a time of need. Loaves and Fishes closed after they deemed that they couldn’t meet demand. Curtis said that Loaves and Fishes plan to reopen, despite misconceptions that they permanently shut their doors.

With allyship from the school districts and permission from the U.S. Department of Agriculture to deliver food to the doors of those in need, expansion has been inevitable. The large-scale operation now has the capability to deliver two meals each day to every kid in McDonough County, Curtis said.

Through Genesis Food Response, Curtis said that they started by delivering groceries to about 120 households and that now they have twice as many households on the delivery route. The weekly grocery delivery service benefits greatly from working with the Peace Corps Fellow Program, Curtis said.

Loaves and Fishes, The Tracy Family Foundation, United Way, and Fellheimer Trust have also been consistent financial contributors, according to Curtis. Combined with generous donations from local individuals, Curtis said that Genesis Garden has raised more than $100,000 for food response efforts.

“A lot of people are doing really badly during this pandemic, but there are a lot of people that are doing fine and want to help, so they’ve recognized that Genesis Garden is active and doing something to help the community,” Curtis told The Voice. “A lot of people are sending us a check every month to help us fund our programs. It’s just been a real community effort all around.”

Curtis said that they could always use more volunteers – especially those with a driver’s license and free time on Thursdays to help with grocery deliveries. He said that he’s grateful for the work that the roughly 250 volunteers have done since the beginning of their efforts.

For Curtis, promoting and providing healthy food is a chance to create a positive and meaningful impact.

“I recently spoke with a local healthy provider who told me that some of her local patients literally do not eat anything except processed foods. She told me that since we began our deliveries of quality foods, including fresh fruits and vegetables, the difference in their health has been measurable,” Curtis said.

The final branch to the diverse organization are the Victory Gardens. Curtis said that they plan to plant six or seven gardens in the city of Macomb and one in Bushnell. All gardens would be considered public access gardens and would be open to anyone who wants to harvest vegetables and herbs.

Recently, they added gardens on the property of the First Presbyterian Church on East Carroll Street, and one on the corner of West Adams Street and North Johnson Street in Macomb.

“We think that this is going to be a really great way for people to get fresh, local vegetables and not have to worry about what they can afford,” Curtis said. “…because, we all know the worst food for you is the cheapest and the best food for you is expensive, so to be able to provide that is a big deal.”

Additionally, Curtis said that the organization helps find solutions for those without water or electricity, and will find temporary housing for individuals who are homeless.

To donate or to learn more about the organization, visit genesisgarden.org or find them on Facebook.

Email [email protected] with comments or questions on this story.