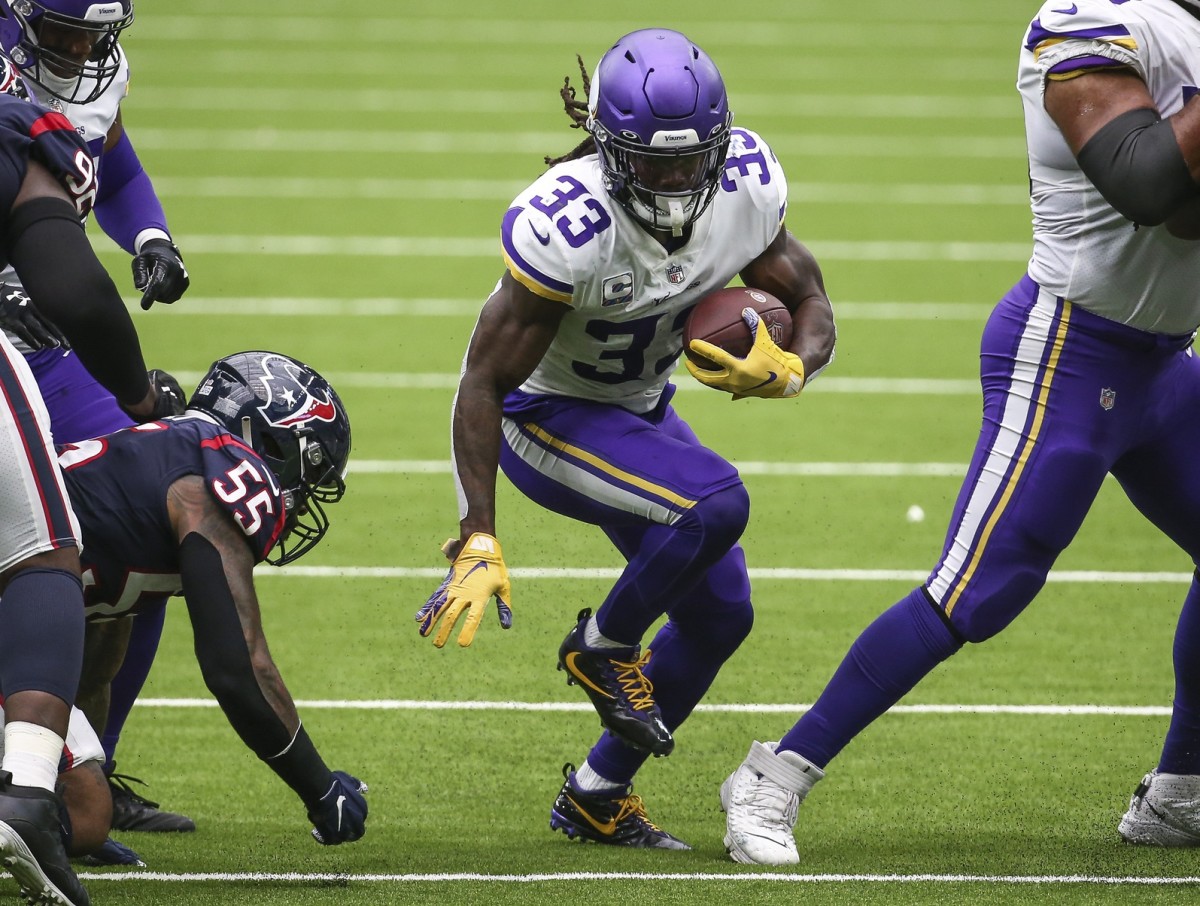 Vikings Pro Bowl running back Dalvin Cook spoke to reporters on Wednesday (via Zoom, of course) for the first time in over a month, answering questions about a wide variety of topics. The primary purpose of the call was for Cook to receive the Korey Stringer Media Good Guy award, given annually to the player who best demonstrates cooperation and professionalism with the media. That was supposed to happen prior to Week 17, but it was pushed back after the unexpected death of Cook’s father.

In the weeks following the conclusion of a disappointing 7-9 season for the Vikings, Cook’s mind has understandably been on other things. But he was willing to talk football in this virtual press conference. One topic that came up a couple times was how he’s feeling after a season in which he finished second in the NFL with 356 touches in just 13.5 games. As usual, Cook said he doesn’t mind the heavy workload.

“Once I’m feeling it, it’s like the touches don’t really matter,” he said. “Coming out of that type of year, you build your body up extra hard, you hit the weight room a little harder, and you just do things a little harder. I think the injuries or whatever, that comes with the game. I’m going to turn it loose, and I’m going to have fun with it. Next year is going to be an opportunity for me to explode again, and I’m going to take full advantage of the opportunity by working my tail off this offseason so I can be ready for 16, 17 games – however many games I’ve gotta go.”

Cook stayed mostly healthy for a second straight year, although a groin strain did cost him a game and a half. However, NFL history has many examples of players struggling with health and effectiveness after handling 350-plus touches in a season. Cook said he planned to take a couple weeks off, but hasn’t been able to help himself and has been in the gym periodically. “I’m sitting down next week and getting a plan with my trainer of what I want to attack this offseason, what I want to get better at and those things,” he said.

Meanwhile, he’s been paying attention to the NFL playoffs, trying to pick up on things here and there.

“I like to watch,” Cook said. “I like to live in the moments with those guys. I like to do all that, and I like to visualize, ‘What did we do wrong?’ leading up to this point, and there’s a couple of games we let slip. We could’ve easily been a 10-game-winning team, you know, but the teams that are in those big moments now capitalized on those little moments to win the games, did the little things, and that’s what you look at.”

Here are the rest of Cook’s answers on a few notable topics.

“It was a great year for me, and I think it’s something I can build from. I think the sky’s still the limit for me. Whatever I want to accomplish, I think I can go get it, upon all the hard work I’m going to put in this offseason. Going into last year, I kind of felt myself scratching the surface then, just how I ended the year. I came into the offseason working hard. I know what the work’s going to take, and it’s not all me. I’ve got to give those guys around me, in the offensive room, my team, credit too — just with going out there and blocking and doing the little things. I’m just looking forward to another big year, and hopefully being in [the Super Bowl next year].”

On not being named an All-Pro (Derrick Henry and Alvin Kamara were the two All-Pro running backs):

“I’m not really big on things like that, but when you go to look at the facts of the situation, everything’s there to be proven. So I don’t know how I didn’t make the list. You know, like you said, the motivational part, you put it in your back pocket or in your mind or wherever you need to put it at to be a reminder for you to go be great, for you to work hard that day, and the next day. That’s what I do. I just carry it with me, and those last reps when I’m tired, you push through for moments like that.”

On the retirement of offensive coordinator Gary Kubiak:

“Me speaking on Coach Kub is nothing but positive, and just real. That’s what he brought to the table, just a lot of realness. He just always shot us straight, and that’s what I love in a coach. He was just one of those coaches that you’re going to remember forever. The memories that we have of those two years, it felt like five years. Coach Kub’s just one of those [guys], he spit so much knowledge out. To see him go, it’s tough, man, because I feel like he would still spit more knowledge out, but you know how that goes. We’re going to miss him, but for the up-and-coming OC, whoever it is, I’m just looking to have a great year with him, this group. It should be fun; we’re going to have a great team this year.”

On what he’s looking for from the Vikings’ next OC:

“I think really, with our offense, it’s about finding balance, and we’ve got guys that can light the field up. We’ve got the backs, we’ve got the receivers, the tight ends, we’ve got the playmakers. I just think he’s going to be that coach that comes in to find the balance early, to spread the ball around and get everybody involved, and that’s not easy on the offensive coordinator when you’ve got so many guys that can make plays. So it’s going to be us finding ourselves early and getting in that groove early.”

Thanks for reading. Make sure to bookmark this site and check back daily for the latest Vikings news and analysis all offseason long. Also, follow me on Twitter and feel free to ask me any questions on there.