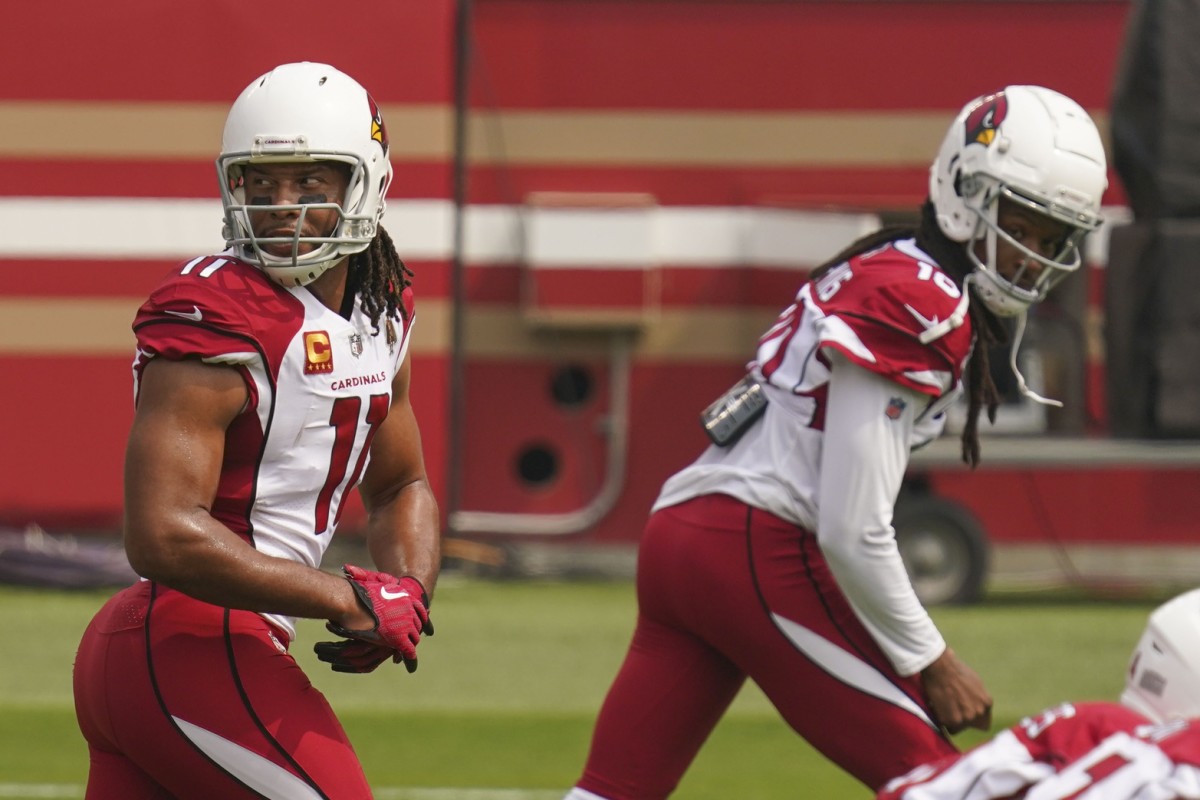 The Cardinals made one of the highlight trades of the offseason last year with the addition of wide receiver DeAndre Hopkins from the Houston Texans.

Paired with second-year quarterback Kyler Murray, Hopkins made countless highlight-reel plays throughout the season, including the Bridgestone Clutch Performance Play of the Year in Week 10 against the Buffalo Bills – the “Hail Murray.”

But, the rest of the receiver corps proved inconsistent, leaving questions for the group going forward.

Hopkins came in and showed his prowess from Week 1. He had 14 grabs for 151 yards in his team debut.

The new addition, who signed a three-year extension before the year, was a threat in all three levels from screens to Hail Marys.

He broke the franchise record for catches in a single season with 115 and earned All-Pro second-team honors.

Christian Kirk had a hot first half of the season. He stretched the field at times for Hopkins, something he said was his role.

Kirk’s season highlight may have been when he caught an 80-yard touchdown from Murray down the seam against Dallas in Week 6.

Veteran Larry Fitzgerald didn’t have a strong showing by his standards with career-lows in catches, yards and touchdowns. However, the 37-year-old was a reliable weapon over the middle in the short passing game for Murray and was praised for his leadership throughout the year.

The positional depth was an issue.

Kirk had one 50-yard performance after Week 11, and Fitzgerald missed three games in the second half of the season, tied for the most in his career.

They both missed Week 17, and Arizona’s lack of playmakers without them was glaring.

The Cardinals drafted three receivers in 2019. Hakeem Butler was released before the season started, Andy Isabella has yet to prove that he is an NFL receiver aside from one strong game in Week 3 and KeeSean Johnson was inactive for much of the year.

Isabella, a second-round selection, was especially disappointing with two drops, only 21 catches and a passer rating when targeted of 62.1. The Cardinals selected him with Seahawks Pro-Bowl receiver DK Metcalf still available.

The Cardinals could look at receiver as a glaring need this offseason, especially with Fitzgerald contemplating retirement.

○ Hopkins was sixth in the league in yards after the catch with 527.

○ Hopkins was second in the NFL in first-down catches with 75, just behind Chiefs tight end Travis Kelce.

○ Hopkins accounted for 45 percent of Cardinals receptions by a receiver.

○ Fitzgerald tied for ninth in the league in catch rate at 75 percent.

DeAndre Hopkins: As Fitzgerald, who was Arizona’s top receiver for 13 of his 16 years prior to 2020, saw his role diminish with age, Hopkins came in and was top-five in the league in catches and yards. He averaged 119.8 yards per game in Cardinals wins.

“DeAndre is a phenomenal talent,” recently hired receivers coach Shawn Jefferson said. “To be honest with you, he’s probably the only one in the league that I can compare to Calvin Johnson.”

Jefferson coached Johnson, a Hall of Famer, in Detroit for six years.

Head coach Kliff Kingsbury on Fitzgerald: “He’s got a lot to think about. We all want him back. He knows that we all know he can still be a force on the field when he’s feeling good and healthy and doing what he can do. I’m not sure the exact timetable, but he’s one of the best to ever play and still can play at an incredibly high level and we want him back.”

Fitzgerald entering Week 17: “I mean, 37, played a lot of games, so I wouldn’t say I feel great, but every day it’s getting a little better.”

Hopkins on making the Pro Bowl: “Personal accolades don’t win championships. So for me, it’s a pat on the back. But still, I’m trying to get some more plaques on the wall here in this building.”

Fitzgerald was asked multiple times during the season and on the golf course afterwards: Is this it?

The 17-year Cardinal has not announced a decision, and Jefferson said Tuesday that he has no insight on his plans.

Fitzgerald has said he wants to compete for a championship, even joking during the season that if the Cardinals won it all then he wouldn’t be around anymore.

But, he also pointed out that his body was not feeling great at the end of the year, and a groin injury kept him out for the season finale.

Meanwhile, Sherfield is a key to the Cardinals special teams as the gunner, and could be an important piece to return for that role.

He had four catches in Week 17, tied for the team lead with Hopkins, but did not line up at receiver often.

This free-agent class has a lot of strong receivers like Kenny Golladay from Detroit, Allen Robinson from Chicago and Chris Godwin from Tampa Bay.

The draft also has several highly touted prospects, so this is a key offseason for Arizona to get Murray some help along with Hopkins.