10 Ways That Wall-E Is Scary & Disturbing 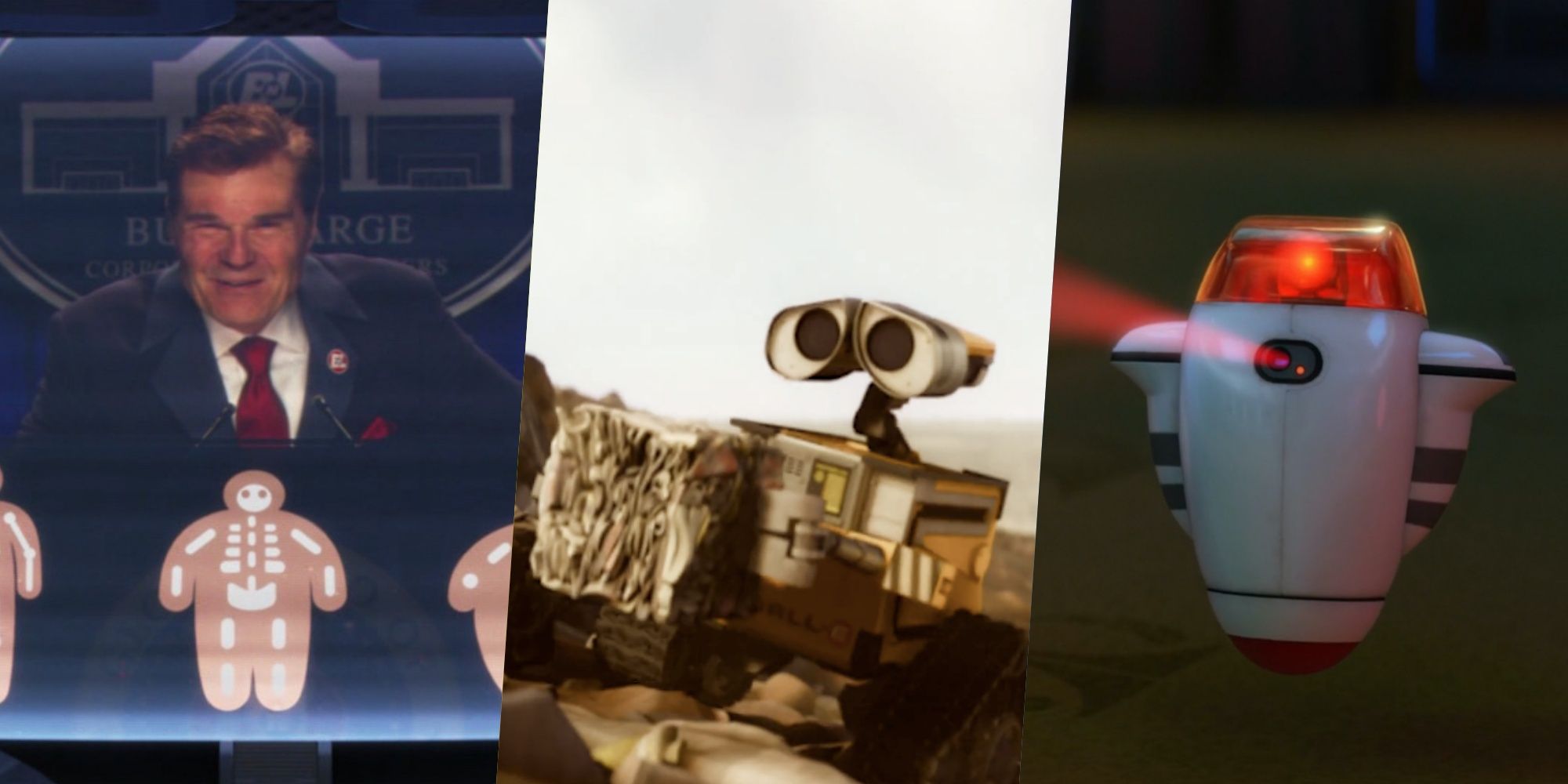 Pixar’s Wall-E put a spell on viewers upon its release. When everyone clamored to see the next emotional picture the Disney company had to release next, Wall-E’s was much anticipated. In a heart-wrenching tale about a romance between two robots in a wasteland future, the filmmakers and animators did not skip on any level of detail when it came to world-building.

While the world of Wall-E is debatably a cynical one, the consideration of how this reality came to be is given life in its history and existing threats that is particularly terrifying. Especially for the adults who are contemplating the idea that these horrible things could really happen someday.

10 Wall-E Outlived Generations of Other Robots

If the viewers study the picture close enough while Wall-E is still on Earth, they will remember seeing all the hallow shells of dead Wall-E bots strewn throughout. Whether or not this has ever bothered Wall-E is a mystery, as it’s presumed that he’s been working for a very long time (to the point that he is the only one left to collect and organize trash). Not only is it lonely, but it’s also haunting and makes the arrival of Eve all the more refreshing and, for Wall-E, a relief.

9 Humans Are Nearly Stranded Out in Space

Considering the directive of the controlling robots on the Axiom spaceship, the drive of consumerism nearly led to the human race being completely stranded in outer space. While this isn’t really something one thinks about when watching a kid’s movie, in a film, such as Alien or Apollo 13, it is very much a scary thought.

How much oxygen do humans really have left if they don’t have any plants to create O2, to begin with? How much food do they have left? People have also had theories on where the human’s food sources come from, to begin with, and they are not pretty.

It’s funny, considering the everyday lives of the humans on the Axiom are focused on the screens attached directly to their faces. It is only when the screens of two people, in particular, are broken do they start paying attention to each other.

While they don’t seem unfamiliar with the concept of falling in love, it’s a rare occurrence in which people see each other face-to-face and experience things together, especially love. Again, this raises another question about the Wall-E-verse: considering humans prefer to stay in their hoverchairs, where are all the babies come from?

7 Where Are All the Other Animals?

Much like how plant life has become a rarity in this world, apparently, so have animals. There is not one animal present, other than Roach and the human species. This, along with the environmental destruction, indicates that animal ecosystems have been broken down and have likely gone extinct.

However, it’s curious that even pets like dogs, cats, and fish don’t live on the Axiom and aren’t shown in the film (although they are implied that they return in the end credits, thankfully).

6 Children Are Raised by Nannybots

If it wasn’t enough that humanity has become so removed from real-life experience, the children are too. Though it isn’t attached to their faces, the children have screens in front of them at all times. They also have the Buy-n-Large Nannybots teach and raise the children in “daycares.”

RELATED: 10 Movies To Watch If You Liked Pixar’s Soul

It’s a creepy thought, especially considering how strangely lifeless the Nannybots are and how they could potentially make the children useless consumers and part of the Axiom and Buy-n-Large system.

5 How Humans Evolved to Be Helpless

As many fans remember, the humans were seen to be quite comfortable in their hoverchairs and could barely walk on their own if they got out of them. Due to the lack of movement and exercise, especially considering they are in outer space, the humans have grown accustomed to sitting and staring at the screens in front of them.

Everything is also handed to them by the corporation that has attempted to trick them into thinking there’s no home left on Earth and that the plant was something to discard rather than take care of.

4 The Skyscrapers of Garbage

In a horrifying introduction to the world of Wall-E, the camera pans over towers of garbage constructed by Wall-E robots. The sight is just as gross as the disturbing revealation of what our world has come to. It should really shake and unnerve anyone who considers themselves a part of the issue.

The Earth has literally become a huge dumpster that the humans had left behind, leaving the trash to rot and decompose as the remaining robots are forced to clean up.

The haunting history behind how the world ended up being covered in trash was the Buy-n-Large corporation’s takeover – a figurehead similar to today’s monopolies claiming to provide comfort and essentials to all. The problem is, where their focus is to produce, sell, and profit, they disregard the waste created by excessive consumerism.

RELATED: Pixar’s Wall-E: 5 Of The Funniest Moments (& 5 Of The Saddest)

Instead of offering a healthy solution to reverse and prevent the damage, Buy-n-Large instead persists in continuing to profit off of the marketplace by making the Earth inhabitable for humans and rocketing them up into space, where they can continue to profit in a controlled environment.

When Earth is shown as it is in the 29th Century, it’s revealed just how bad human destruction has taken its toll on it. Not only were humans forced to leave because it was getting hard to breathe and the air had literally become toxic from all the trash, but the atmosphere is so tainted and dirty that it’s visible from space.

When Wall-E escapes the planet to follow Eve by clinging to a rocketship, it’s also shown that part of the reason why the atmosphere is so visible and opaque is from the thousands of discarded satellites crowding the sky.

Wall-E is Terminator for kids. The robots are explained as having “directives,” programming, essentially. While Wall-E and Eve seem to have grown into their own conscious spaces and can make more human decisions for themselves, other robots are shown only able to follow orders. Many of those include security bots, who happened to be armed and dangerous.

Lastly, there’s Auto, the ‘co-pilot’ to the captain of the Axiom that acts on behalf of Buy-n-Large’s orders. Auto is willing to kill, fry, and torture to carry out its directive. As it can take control of the Axiom at any moment, this awful robot has way too much power and literally endangered the entire human race.

NEXT: WALL-E & 9 Other Heartwarming Sci-Fi Romances


Next
Harry Potter: 10 Things About The Malfoys That Make No Sense

Chaiana Galicia is a Screen Rant writer as well as a creative/screenplay writer, film critic, working artist, and graphic novelist with an in-depth education on all things pop culture, art, and underground. She has also appeared in short films and worked on features as a storyboard artist, art director, and props creator. If you don’t want to see it, chances are she has, supplementing her knowledge of the fascinating, nerdy, and obscure. Find her on Instagram at limina_1999 and Twitter at Chai_Simone