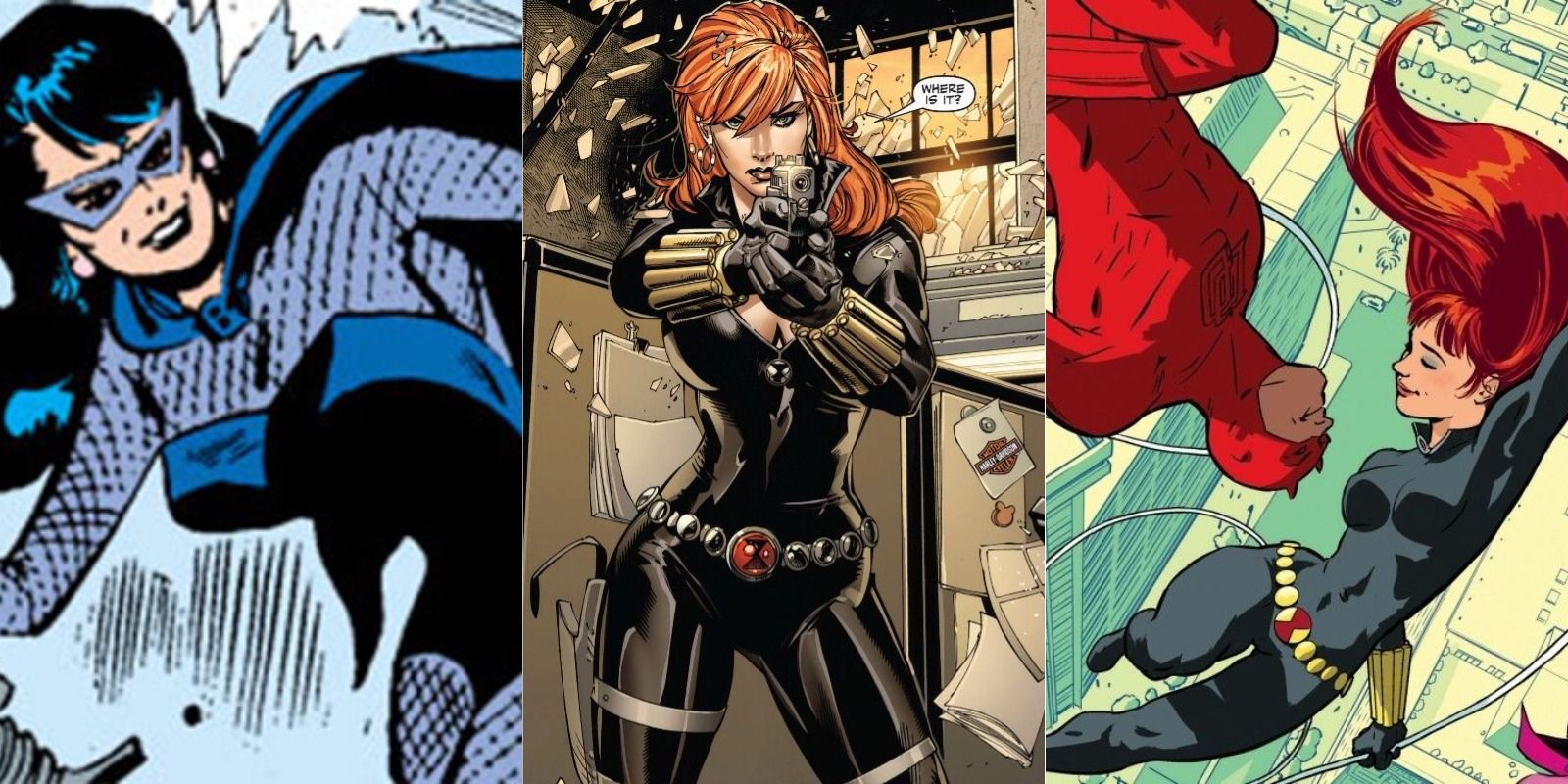 Natalia Alianovna Romanova, also known as Natasha Romanoff, made her comic book debut in Tales of Suspense #52 in April 1964. Natasha debuted as a recurring, non-costumed antagonist to Iron Man, a Russian spy with shaky morals and a lack of commitment to any cause, even Russia’s. Soon after receiving her first Black Widow costume and weaponry, she defects to the United States, beginning a complicated relationship with the Avengers.

Natalia was born in Stalingrad, in the former USSR. Her mother died during the pivotal Battle of Stalingrad, and her father wasn’t in the picture. Natalia then falls into the care of Ivan Petrovich. Depending on the version, he is either a surrogate father figure who personally trains and aids her or a Russian agent who delivers her to the Red Room, where she gets brainwashed and enhanced, both physically and mentally.

Natalia eventually becomes a gifted spy, martial artist, and sniper. The weapons she carries, which the movies often show but never explain, are known as her “Widow’s Bite” in the comics.

9 She Has False Memories Implanted

To guarantee the Widows’ loyalty, the Red Room implants fake memories in their system before deploying them, thus erasing any real identity they had before their training. Natalia eventually learns her real past, including the fact that she never was a ballerina.

Black Widow seems to be including all these elements in the plot. Hints of Natasha’s past as a ballerina briefly appear during her nightmare sequence in Avengers: Age of Ultron. Her upcoming solo adventure could very well be about her reclaiming her real past instead of running away from it.

The Widow likes to change her backstory to fit the narrative she’s trying to convey. A gifted spy, she’s an expert liar and a consummate actress who, in her own words, “lived many lives.” During her brief stint as leader of the short-lived Los Angeles team the Champions, she hints that she may be a descendant of the doomed House of Romanov and a relative of the former Russian Tzar, Nicholas II.

Should this be true, the Widow would be a distant member of royalty. Her title would have little meaning, of course, as the Tzar and his family perished during the events of the October Revolution in July 1918.

7 She Married The Second Red Guardian

As part of her commitment towards Russia, Natalia married the second Red Guardian, Alexei Shostakov. Arranged by the KGB, Shostakov had yet to receive the Red Guardian identity when the marriage took place. Once he assumes the mantle, he is ordered to cut off all contact with her. The Soviet government then tells her he is dead and continues her training separately. The Widow and Shostakov’s paths cross again in China when she’s already an Avenger and he’s still a Russian operative.

The MCU will significantly change this in Black Widow. Shostakov, played by Stranger Things‘ David Harbour, will act as a father figure towards Natasha instead of a love interest.

6 She Fought Against Iron Man During Her First US Mission

Natalia’s first mission in the US consists of assisting Boris Turgenov in the assassination of Anton Vanko, a professor who previously defected the Soviet Union. Natalia tries to extract information from Tony Stark, eventually coming into conflict with Iron Man.

Turgenov, enhanced by the Crimson Dynamo suit, fights Iron Man alongside Natalia. The conflict ends with Vanko sacrificing himself to stop them, killing Turgenov in the process. These events are loosely adapted in Iron Man 2, where Natasha also infiltrates Tony Star’s life and company, but under S.H.I.E.L.D.’s orders, not Russia’s.

5 She Fell In Love With Hawkeye

Shortly after her defeat at the hands of Iron Man, Natalia meets criminal archer Hawkeye. She successfully pits him against Iron Man and the two come close to defeating him. When she gets hurt, the two retreat into safety. During this time, she falls in love with him and begins seriously considering defecting to the United States.

The KGB finds out and shoots her down but is unable to kill her. This event leads to Hawkeye’s reformation, eventually seeking membership in the Avengers. Clint and Natalia’s relationship eventually ends, but they remain close throughout their comic book history.

4 She Had A Relationship With Matt Murdock

Now officially going by Natasha, the Widow enters a professional and romantic relationship with the superhero Daredevil. She acts as his sidekick while he’s on missions and tries to lead a normal life whenever she’s out of costume.

The relationship is long and meaningful, but it ends when she realizes she might be losing herself. She decides that being his sidekick isn’t enough and they part ways. Their paths keep crossing and despite her obvious lingering feelings for him, he chooses to keep things platonic. She eventually moves on after realizing he’s far too angry to commit to a relationship with her, especially after the death of his one-time love, Karen Page.

3 She Briefly Pursued A Career As A Fashion Designer

During her relationship with Murdock, Natasha tries to adopt a regular civilian identity in San Francisco. She unsuccessfully pursues a career as a fashion designer but fails to adapt to a normal lifestyle.

The Widow doesn’t have much of a personal life in either the comics or the MCU. Unlike other heroes who get alter egos and 9-to-5 jobs, she is the Black Widow first and Natasha Romanoff second. It’s a shame that this side of her character didn’t get much exposure in the MCU, and her random relationship with Bruce Banner remains the sole exploration into the character’s personal life.

2 She Has A Long History With The Winter Soldier

Natasha’s story with Bucky Barnes is as long and complicated as his story with Steve Rogers. They meet when he acts as his trainer during her time in the Red Room. The pair’s dynamic isn’t really explored, and it remains unclear if he took part in the torture and brainwashing she endured.

They separate when the KGB discovers their romance. He is put back in cryosleep and she gets brainwashed (again). The pair reunite almost fifty years later and resume their affair in more equal and healthy circumstances. Bucky is the one person whom Natasha actually trusts, so it’s puzzling why the MCU didn’t explore their relationship.

1 She Has A Complex Dynamic With Yelena Belova

Natasha and Yelena go from foes to uneasy allies to friends and back to foes during their long and intricate comic book history. Yelena first appears as a challenger for the Black Widow title. She’s the first person to surpass Natasha’s scores in the Red Room, and as such feels obligated to beat Natasha.

Natasha then subjects Yelena to a tortuous reconditioning, using questionable methods to make Yelena understand the severity of the spy’s life. Yelena then leaves to find her own identity, but the two characters remain in each other’s orbits. At one point, Natasha even impersonates Yelena when trying to bring down the Norman Osborn-controlled Thunderbolts.

David is a twenty-eight-year-old Mexican writer and reader. Having studied Marketng in school, he spent three years working a nine-to-five desk job before deciding to pursue a writing career. He now works as a List Writer in ScreenRant and does some more freelancing job, talking about the entertainment business he so loves. Currently, he’s also writing his second novel while actively working to get his first one published.