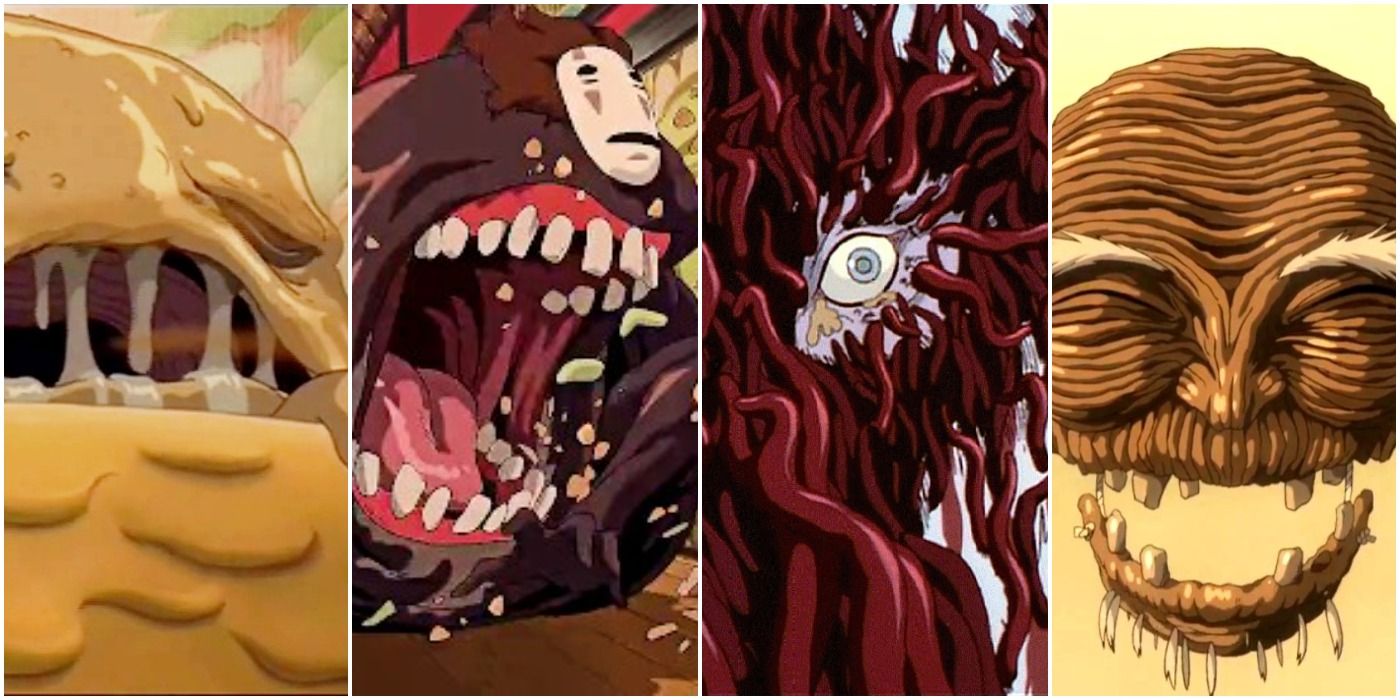 Animation films have been popular for many years among anime fans. Here are some creatures from Studio Ghibli that are too creepy to look at.

One of the most accomplished filmmakers in the history of animation is Hayao Miyazaki. He literally does it all! He is a producer, story writer, manga artist, screenwriter, director, and of course, the co-founder of Studio Ghibli. One of his many talents is creating the creatures that take roles in his animations. Some might be cute like the characters in My Neighbor Totoro but many others are actually disturbing to look at and even scary.

RELATED: The Collected Works Of Hayao Miyazaki: Every Film In The Box Set, Ranked

It’s safe to say that some of these animations are so creepy they can actually spook viewers into feeling uneasy about the stories. Still, most fans cannot get enough from Studio Ghibli and the amazing detailed work put into the film animations. Check out these animated Ghibli creatures that are way too creepy.

For anyone who has been fooled by the title of this animation, it comes as a shock to see one of the opening scenes of Princess Mononoke be of a scary demon boar running rampant near a village. The boar is a God-Boar turned demon after it was infected making it full of hate and rage. The animated movie has a lot of interesting characters who can be quite intimidating including a pack of magical boars and other forest creatures. Demon Nago definitely takes the prize for the most haunting creature in the story and for most viewers, he is the one creepy image that lingers after watching the film.

The movie Spirited Away has been one of Japanese director Miyazaki’s greatest works. The title may be one of his most famously known projects and for good reason. The storyline is elaborate and the characters are stunning.

RELATED: 10 Behind-The-Scenes Facts About Spirited Away

One of the main characters in the film is Yubaba the mistress of a bathhouse that tends to spirits and Gods who visit her bathhouse to get a wash and have some entertainment. Her position doesn’t seem creepy at all but once the viewer sees what her true form is and how her physical features are abnormally exaggerated behind those pronounced wrinkles, she can be very intimidating.

8 Oh Mu: Nausicaä Of The Valley Of The Wind

The creatures in the animation Nausicaä of The Valley of the Wind are all meant to resemble kinds of mutated insects. The concept follows human greed and the poison that humans send off into the environment which contaminates and affects all living creatures, nature, and the atmosphere. The character Oh Mu is an invertebrate that looks like a huge roach-like creature. The creature can communicate with a hive and can also sense when an insect is killed causing it to go into a rage which can be dangerous for humans. The creature has 14 eyes and bleeds blue blood making them seem way too creepy to be liked but the human characters eventually convince audiences that the Oh Mus are not as scary as they appears.

Here is a God of life and death that is known as The Night-Walker or The Forest Spirit. In the story of Princess Mononoke, it is known by most of the story characters that the forest spirit should not be disturbed and that he is rarely seen in his animal form while drinking from a lake of healing waters. The plot is very intense and touches on a lot of good human concepts. Though the creature itself is not scary, it is a very abnormal-looking forest deer and at night it transforms into a gigantic spirit creature that carries the form of what looks like a dinosaur. It can be very disturbing to see the character’s different forms, but more disturbing is the appearance of it once the humans come and cut off its head.

The 2006 fantasy animation Tales From Earthsea carries a very intruding plot with a magical wizard named Sparrowhawk who sets out to save the world from chaos and destruction. The evil antagonist named Cob is on a quest for ultimate power and immortality. Cob will stop at nothing to get what he wants, even if it means destroying Earthsea. The character Cob appears to be an ominous-looking man but his dark magic transformations make him very perplexing to look at.

Howl from Howl’s Moving Castle is in reality a likable character in the animation, especially when Sophie is introduced into his life. He is passive and distracted most of the time but once the viewer realizes that Howl is under a curse which could turn him into a monstrosity, one can’t help but to want to see his dark form.

Howlbird is one of the creepier animated creatures from Ghibli because the human-demon concept can be very freaky and Howl in his creature form is quite startling.

Spirited Away has many spirit characters and one of those characters is called No-Face who appears to be a ghost-creature with no face, only a mask on, and no voice. At first, the creature is almost cute as it tries to befriend the main character, a little girl named Chihiro. After a story twist, No-Face attempts to attack Chihiro chasing her through the bathhouse and devouring people to take on their personas. No-Face is not only very unsettling in its appearance but also in its behaviors as you never know if it is a friend or a foe.

The next in line to become the leader of the boar pack after Nago the boar-God dies is Lord Okkoto. Okkoto is convinced that humans are to blame for all things destructive and after getting infected by the same demonic hatred as Nago, he charges with his boar army infecting many along his way to kill the humans. The entire appearance of Okkoto as his infection grows is very creepy to witness and even more creepy still when Princess Mononoke herself gets trapped in his hide full of gooey mini-demons trying to suffocate her.

The River Spirit in Spirited Away shows itself in more than one form. As the old man’s floating face and as the filthy stink spirit that visits the bathhouse. Both of these animated depictions are freakishly startling in their own ways.

The stinky one is horrifying with its appearance being a big mass of glop and goop spreading its waste everywhere it steps. The other is an old man’s extremely wrinkled face hoovering as its deep voice echoes. Viewers can decide which form is creepier.

The 2006 Studio Ghibli released animated film Tales From Earthsea has many interesting characters such as wizards, evil lords, witches, and dragons. The story of the dragons is that they live too far away from human settlements and are never seen. In the plot, it is learned that dragons have been reportedly seen near civilian life and have been violent. Dragons of course are already scary creatures. When viewers take a look at the dragons in Tales From Earthsea it will definitely send chills.

NEXT: Which Studio Ghibli Protagonist Are You Based On Your Zodiac Sign

Lynne Marie is a writer, editor, artist and teacher who is based out of California. She stays active both physically and mentally and is desperately in love with healthy living and getting into anything out-of-the norm. Her Maine Coon and Russian Blue kittens keep her frantic all night and laid back all day. She now works as a writer for Valnet, Inc, covering articles on ScreenRant. She is also an educator for learners of English as a second language.