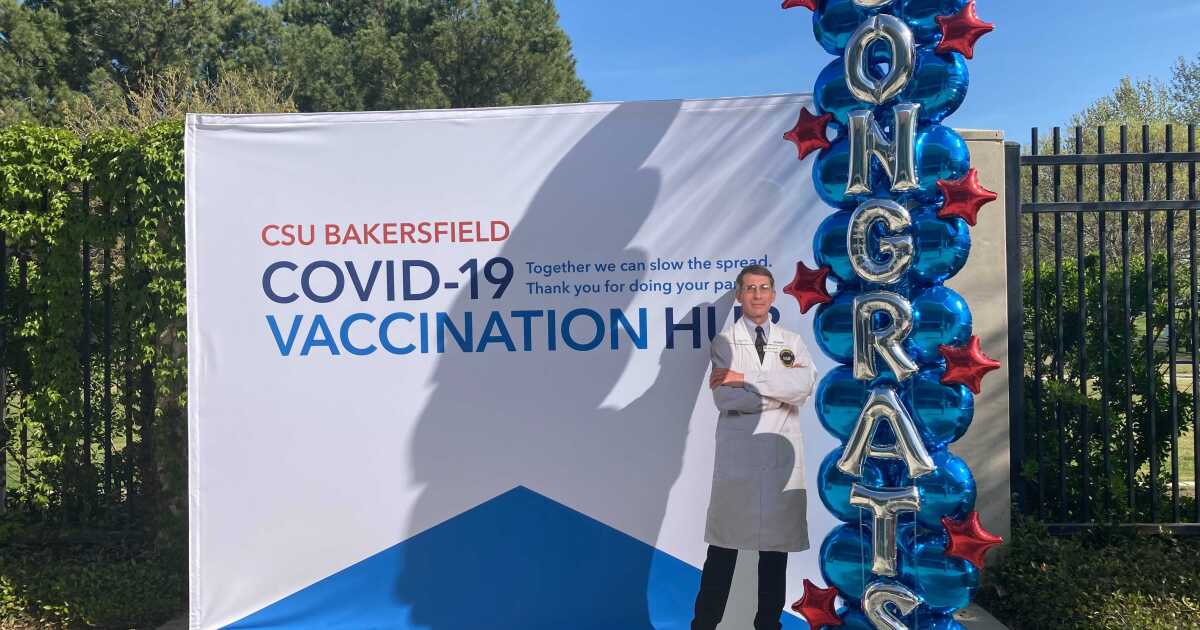 Why, you might ask, did the Central Valley city of Bakersfield trend for several hours on Twitter Monday night?

As with most of the questions dominating our late-stage pandemic days, the answer to this one has something to do with vaccines. Specifically, how to get them.

Drawn north by word-of-mouth and electric buzz bubbling through all the usual social media platforms, thousands of Southern California residents have arrived in the crown jewel of Kern County in search of a shot in the arm. And an open-door policy that, for the otherwise ineligible, would not require skirting the rules in order to receive said shot.

As my colleague Laura Nelson reports, Cal State Bakersfield has been the go-to vaccination site for the young and the healthy from Los Angeles County for more than a week, ever since word spread that the facility had more doses than patients — thousands more — and no restrictions on age, eligibility or county of residency.

[Read the story: “L.A.’s young and healthy head to Bakersfield for COVID-19 vaccine” in the Los Angeles Times]

Many of the Southern California vaccine seekers will be eligible for the shot at home in a week or so, when the state extends vaccine eligibility to all Californians 16 and over on April 15. But there’s no guarantee that appointments will be available right away after the 15th, particularly as demand from the newly eligible soars next week.

Bakersfield officials told Nelson that it’s true the site is vaccinating everyone 16 and older, but they stopped short of encouraging out-of-town visitors. They cautioned that the clinic is meant to serve Kern County residents, and the appointment system is reserved for locals. But they were also determined to get shots in arms.

“We have the capacity, we have the vaccine — it would be a crime to turn people away,” David Womack, senior vice president of Kaiser Permanente in Kern County, which helps operate the site, told Nelson.

Kaiser officials also told her that the site’s excess capacity is due at least in part to a relatively high rate of vaccine hesitancy in Kern County, saying local officials are evaluating levels of vaccine hesitancy among Black residents, Latino immigrants and white evangelicals and how to address it. According to the Los Angeles Times vaccine tracker, 24.6% of Kern County residents have received at least one dose of the vaccine, compared with 33.9% of residents in Los Angeles County and 34.5% of residents statewide.

Writing for the Bakersfield Californian, Emma Gallegos reported on some of Kern County Public Health Services’ efforts to ensure residents are aware that they are eligible to get the vaccine. Those efforts have included door-to-door canvassing, information booths stationed at local grocery stores and appointment scheduling assistance.

The operations lead for the Cal State Bakersfield site told Gallegos that she hoped news about eligibility opening up in the area would “help increase our vaccination rates here in Kern.”

And now, here’s what’s happening across California and beyond:

Biden to take executive actions to reduce gun violence: President Biden, making his first foray into efforts to control gun violence since taking office, plans to announce Thursday an effort to limit so-called ghost guns — weapons sold without serial numbers or other identifying information — and nominate a figure from a major gun-control group as director of the federal agency that regulates firearms. Los Angeles Times

Note: Some of the sites we link to may limit the number of stories you can access without subscribing.

Seventy-two years ago today, a 3-year-old girl named Kathy Fiscus fell down a well in San Marino. The multiday rescue effort was the first significant breaking news event broadcast live on television, complete with klieg lights on loan from Twentieth Century Fox. The incident transfixed the nation and changed the way Americans consume news, according to Bill Deverell, one of the great historians of the American West. Deverell’s new book about the Fiscus tragedy and its far-reaching implications for American culture is a fascinating and gripping read. Alta

“The HR person left in an ambulance due to a panic attack. That was the environment.” An astonishing array of accounts from former employees of notoriously abusive boss and Hollywood mega-producer Scott Rudin. The Hollywood Reporter

Los Angeles is poised to pay nearly $1.6 million to settle three lawsuits involving alleged wrongdoing by the Los Angeles Police Department, including a $1.15-million payout over the shooting of a man from an LAPD helicopter. Los Angeles Times

Tiger Woods was driving as fast as 87 mph, nearly twice the speed limit, when he hit a sharp curve and crashed on the Palos Verdes Peninsula in February, the Los Angeles County sheriff said. Los Angeles Times

HEALTH AND THE ENVIRONMENT

Far fewer California seniors are getting vaccinated in “red” counties than urban areas. Overall, nearly 56% of California seniors have received the full course of a COVID-19 vaccine, but there are huge variations in senior vaccination rates among the state’s 58 counties. Los Angeles Times

CBS has ousted two powerful TV station executives after allegations of racist and abusive behavior. The move comes after an investigation by The Times of TV group President Peter Dunn and Senior VP of News David Friend. Los Angeles Times

A formerly homeless grandmother is going up against one of California’s biggest real estate speculators in an early test of a new state law. KQED

A poem to start your Thursday: “I Never Figured How to Get Free” by Donika Kelly. Poets.org

Get our free daily crossword puzzle, sudoku, word search and arcade games in our new game center at latimes.com/games.

My father grew up in Taft and we’d drive from the Bay Area to visit my grandparents there several times a year. My mom bought us Lifesavers and Chiclets for the long drive, and we’d gaze out the window at the rows and rows of crops. We’d picnic in Los Banos, where the dry heat reminded us we were far from home. But the smell of oil in the air told us we’d made it to Taft. Stepping out of the car, I was immediately hit with that tangy, deep scent of oil, and ebullient, tight hugs from my grandparents.

If you have a memory or story about the Golden State, share it with us. (Please keep your story to 100 words.)

Please let us know what we can do to make this newsletter more useful to you. Send comments, complaints, ideas and unrelated book recommendations to Julia Wick. Follow her on Twitter @Sherlyholmes.