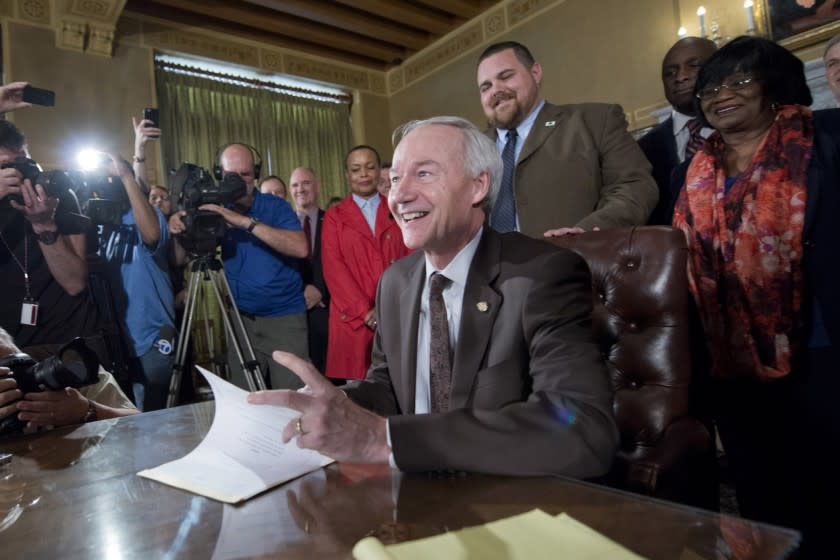 Case in point: The administration just doubled down on its intention to impose work requirements on Medicaid recipients.

This falls into the category of thumbing its nose at a double-barreled disaster — the spread of COVID-19 and an unemployment rate that is reaching levels nationwide not seen since the Great Depression.

We have all seen this movie before.

In other words, Trump is angling to take away healthcare for the neediest Americans unless they can look for or secure a job amid rampant joblessness.

The case specifically involves Arkansas, but the government acknowledges that the court’s decision will have an impact on proposed work rules in 18 other states — eight in which the U.S. Department of Health and Human Services has already approved work requirements, and 10 in which its judgment is pending.

Even if the Supreme Court accepts the case, it won’t hear oral arguments until October or later, with a decision coming sometime in 2021. That makes the Trump brief seem potentially futile, since there will be a presidential election in the interim that may make Trump policies moot.

The most important part of the back story of this case is that the Medicaid work requirements have been rejected by every federal court that has reviewed them.

When the New Hampshire case came before him last year with the same threadbare arguments that he had already rejected, Boasberg figuratively sighed: “We have all seen this movie before.”

Boasberg’s rulings were upheld twice by the U.S. Court of Appeals in Washington, most recently on May 20. The government brief asks the Supreme Court to overrule the appellate judges. (Arkansas has filed a separate brief seeking Supreme Court review.)

So let’s examine the idea of work rules for Medicaid, including how they were applied in Arkansas and elsewhere.

The states and Trump’s Health and Human Services Department, which has been approving these rules with shameless haste, have argued that requiring Medicaid recipients to seek or hold jobs serves several useful purposes.

They say it fosters healthy lifestyles, since working people tend to be healthier than layabouts; that improved health saves money for Medicaid, since those enrollees need less healthcare; and that reducing the Medicaid rolls by dropping nonworkers leaves more money for states and the federal government to spend on worthier and needier enrollees.

The lower courts have unanimously seen these arguments as, essentially, baloney. Although the Medicaid statute allows states to experiment with eligibility rules and benefit terms, it says that any such changes must further the purpose of Medicaid, which is to bring health coverage to needy Americans.

In Arkansas, the only state to actually implement work requirements (since the judge nullified them before other states could act), the change failed miserably to do so. Some 18,000 residents lost coverage in just five months, before a federal judge suspended the regulation.

Some were dropped from the rolls because they couldn’t navigate the state’s complex procedures for registering compliance, which required them to file proof of work or job-hunting via the internet in a system that was frequently inoperable. The program also failed to increase employment, making it 0-for-2.

The rules developed by Arkansas were relatively benign, as these things go. In Matt Bevin’s Kentucky, they were especially punitive.

Kentucky’s program, until Boasberg put the kibosh on it, bristled with paperwork requirements and catch-22s that could easily lead even those who meet the work requirements to trip up and become uncovered.

That’s because the program included a “lockout” if enrollees fail to revalidate their eligibility every year or miss one or another deadline for paperwork: In those cases, they could be denied benefits for as long as six months.

It was clear to some of the judges ruling on these programs that the argument about saving money in Medicaid by making enrollees healthier was mere window dressing — a “post-hoc rationalization,” the appeals court said.

Healthcare advocates have noted that the work rules have things backward — it’s not that good health fosters job-hunting, but that having a job helps people stay healthy.

Throwing people off health coverage makes it harder for them to find and hold jobs, not the other way around. In any event, most scholarship indicates that the vast majority of Medicaid recipients were in fact working, except for those exempt from the rules such as seniors, the disabled, students and caregivers of family members at home.

The courts generally noticed that HHS and the states skirted over evidence that the work rules would reduce enrollment. Boasberg and the appeals court faulted HHS Secretary Alex Azar and Medicaid boss Seema Verma for not even bothering to calculate the potential impact. That made their approval of the work rules “arbitrary and capricious,” a statutory term of art that means their actions were invalid.

It should also not escape notice that the work rules were aimed at one category of Medicaid recipient: those who received coverage through the Medicaid expansion provision of the Affordable Care Act.

The provision extended coverage for the first time to childless low-income adults. Conservatives often tried to slime these enrollees as “able-bodied.”

That’s a way of suggesting that they’re undeserving of assistance because they won’t get off their duffs and work. Verma has used the term with abandon, and sure enough it shows up in the government brief.

In other words, the Trump administration specifically targeted beneficiaries of the ACA, part of its long-term effort to undermine healthcare reform.

What’s most telling about the Trump brief and the intention of Arkansas to push its work program forward is that they utterly ignore facts on the ground.

For one thing, the coronavirus pandemic makes the provision of health coverage to vulnerable populations more important than ever. Some states, including California, have extended sign-up deadlines for Medicaid and Obamacare insurance plans to accommodate the crisis.

For another, unemployment is soaring nationwide, thanks to the pandemic. In Arkansas, the unemployment rate reached 9.5% in May, up from 3.5% at the beginning of the year. Imposing a work requirement on Medicaid in these conditions is the definition of cruelty and stupidity.

And yet they persist. Trump has been tagged for being completely out of touch with the suffering and needs of average Americans. If you doubted that, here’s another data point.