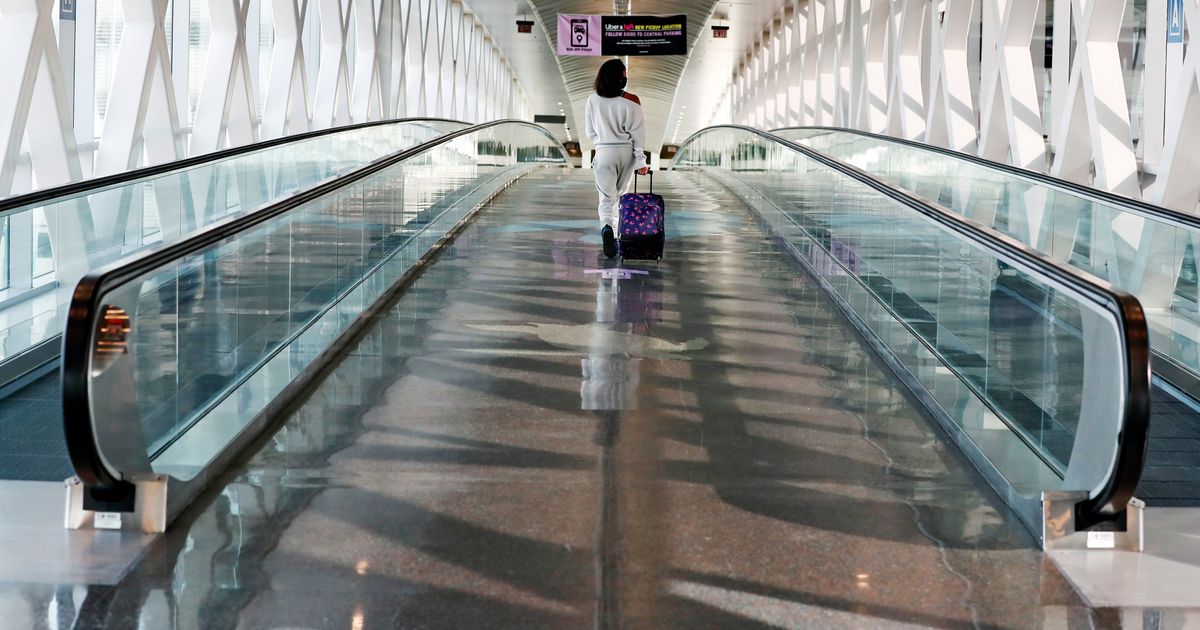 “It used to be that everyone was entitled to their own opinion but not their own facts. I am not sure that’s true anymore. The people who aren’t social distancing and not mask wearing, they are not anti-science, they’ve just found the scientist who agrees with them, and that’s a big problem.”

Thanksgiving this year will look and feel and even taste different for most. The pandemic is keeping apart many who would normally gather. Others have scaled back gatherings or will be eating outside, dining at least six feet apart. Some have been isolating for 14 days before the holiday. Others are skipping it altogether. 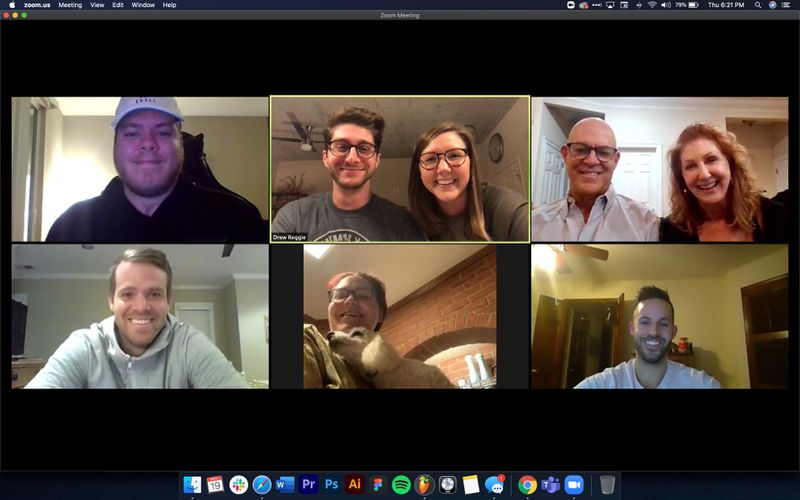 In the end, the Reggie-Butgereit family unanimously decided to skip the annual face-to-face celebration. Instead, they hatched an alternative plan. The Sandy Springs couple will make the feast, which includes turkey as well as prime rib roast, pack up the meals and place them on tables in their garage. Family members in metro Atlanta will pick them up, one by one. Then, around 4 p.m., everyone will join Zoom and eat together.

“We need to be smart about this,” Reggie said.

Many others, though, are forging ahead as if nothing has changed over the past several months.

AAA Travel said it was anticipating a drop of only about 10% in travel, though as the holiday quickly approached the agency said the decline could be higher as people monitor rising cases, new quarantine measures and dire health warnings.

The mixed messages have come from government leaders, celebrities and even some medical professionals.

President Trump, after being infected with the virus last month, told Americans in a tweet, “Don’t be afraid of Covid” and “Don’t let it dominate your life.”

“This kind of isolation is one of the unspoken tragedies of the elderly, who are now being told ‘don’t see your family at Thanksgiving,’” Atlas, a herd immunity advocate, told Fox News.

Kim Kardashian West threw a birthday party for herself with dozens of friends on a private island and posted photos of the extravagant trip on social media.

Some colleges are urging students to stay on campus. Others are sending them home for the holiday.

In Oregon, Washington and New York, some elected officials have announced they will defy executive orders restricting Thanksgiving gatherings.

“It’s super confusing messaging,” said Castrucci of the de Beaumont Foundation in Maryland. “We really need our leaders – from political leaders to athletes to celebrities, country music singers, everyone — talking about what they are doing to keep their families safe.

“We’ve got to serve up Thanksgiving dinner with a heaping side of safety and that’s what a lot of folks aren’t willing to do.”

Decisions on holiday gatherings are especially fraught for those with elderly family members.

Paula Court is dreading the upcoming holiday, which serves as another painful reminder of time apart from her mother, who is in a nursing home.

She is only able to see her mom in person for about 20 minutes every two weeks. Since the early days of the pandemic, she has watched her mother, who is 74 and has mild dementia, steadily decline. Her mom was also infected with the coronavirus about a month ago, though she has recovered.

The nursing home in North Georgia where she lives is insisting residents not leave for Thanksgiving and aren’t allowing visits on the holiday. Court plans to make her mom’s favorites — including sweet potato casserole and an Italian cream cake — and bring it to her the day after Thanksgiving.

“It is going to be an incredibly difficult and sad day, and if it weren’t for cooking my mom’s favorite dishes, I’d skip it,” she said.

An American flag hangs over the nearly empty Delta terminal at Logan Airport on Friday. With the coronavirus surging out of control, the CDC pleaded with Americans not to travel for Thanksgiving and not to spend the holiday with people from outside their household. (AP Photo/Michael Dwyer)

Federal officials said nursing home residents have the right to leave for the holidays but urged caution. Meanwhile, state health officials are strongly advising Georgia families not to take their loved ones out of long-term care facilities during the holidays. They are worried that residents are likely to bring COVID-19 with them when they return.

Guidance released Friday by Georgia’s public health officials says families will have to be schooled on how to reduce risk if they do take a relative home, and the facilities will have to prepare to isolate residents for up to 14 days when they return.

Meanwhile, nursing home operators whose facilities are usually filled with visitors and special events during the holidays are making plans to fill the void. “We’re trying to think out of the box with what we’re doing,” said Deke Cateau, CEO at non-profit A.G. Rhodes, which has three nursing homes in metro Atlanta. The heart of the plan is to have nursing home staff serve as “surrogate family” for residents.

Families also are torn in deciding whether to include parents or grandparents who live on their own.

Caitlin Russell, a dietician and life coach, says her family gathering will be considerably smaller this year at her home in Sandy Springs, but she still plans to host her parents and her mother-in-law, noting they are all following strict safety guidelines for mask-wearing and social distancing and will get COVID-19 testing. 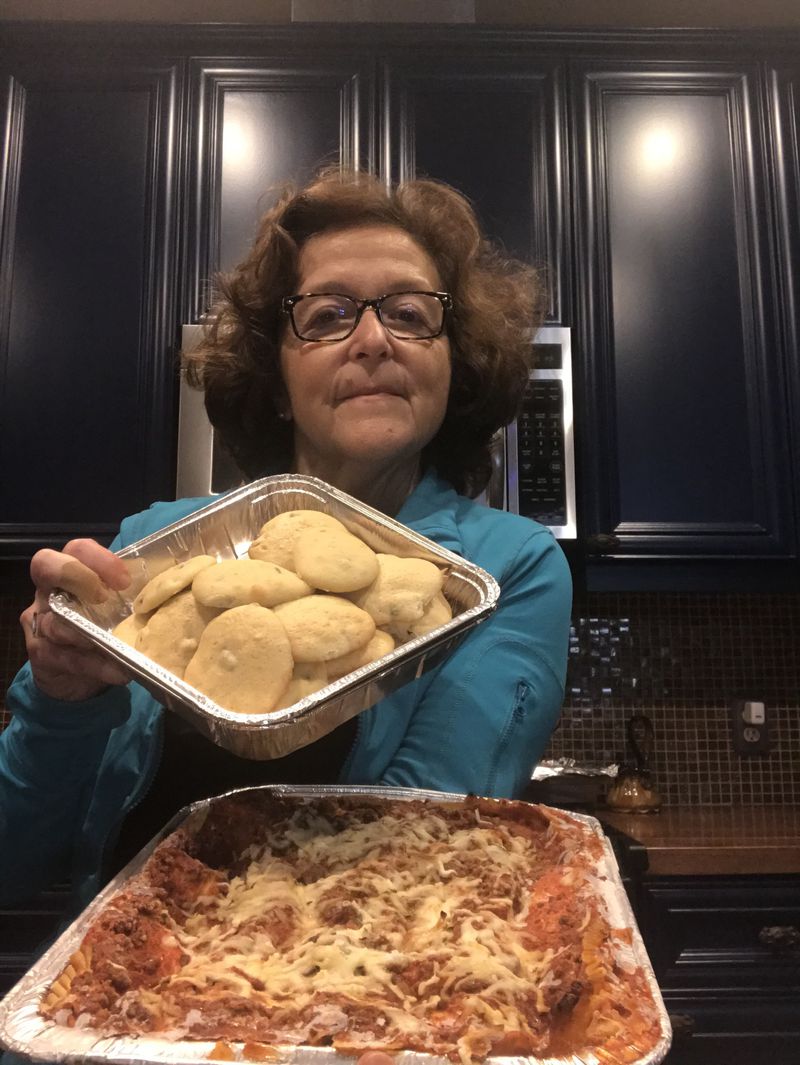 Wendy Kapiloff has been making lasagna for people who might need it for a variety of reasons – hungry families, first responders, health care workers. She will be alone on Thanksgiving and may be preparing meals for others on that day. (Contributed)

Wendy Kapiloff, 65, who was widowed after 38 years of marriage, will be eating alone at her Vinings home, probably take-out sushi from the nearby Publix.

She has children in Oregon and Massachusetts, but traveling there is out. The states that have strict rules on reducing the spread of coronavirus.

“Oregon is shut down,” she said. Her Massachusetts grandchildren are in hybrid school, which means additional exposure. She’s staying home. “Not gathering for one meal on one day to keep everyone safe is easily done,” she wrote in a text message. “With hopes that soon we can gather again safely!”

Reporters Carrie Teegardin and Bo Emerson contributed to this article.

Coping over the holidays

Lynn Hirsch, 68, and her husband Glenn, 70, a retired physician, recently moved to the Avalon community in Alpharetta to be near her son’s family. There were restaurants to explore and three grandsons to babysit.

“Then this happened, and it came to a screeching halt,” she said. “The stores were all closed and the kids were afraid to see us.”

“I was very depressed, just sad about the whole situation and scared about coronavirus and limited in what I felt I could do. We were not seeing family very much and social distancing when we did.”

But like others on their own this holiday, she devised a way to cope.

Her solution: lasagna. Each week she cooks and delivers lasagna to others who might need it, organized through Lasagna Love, started by San Diego resident Rhiannon Menn. Hungry families, first responders, health care workers, those experiencing illness, all were grateful recipients.

And Lynn is a grateful giver, because the weekly planning, cooking and delivering gives her a way to take action and make a difference. “It has totally given me focus, something to look forward to, something to keep myself busy,” she said.

Caitlin Russell, a dietician and life coach, says some of her clients plan to skip the traditions altogether, order a pizza and call it a day. Whatever the decisions, this year will be distressing for many people, and Russell stressed the importance of expressing gratitude and reaching out to those who may be alone or feeling lonely.