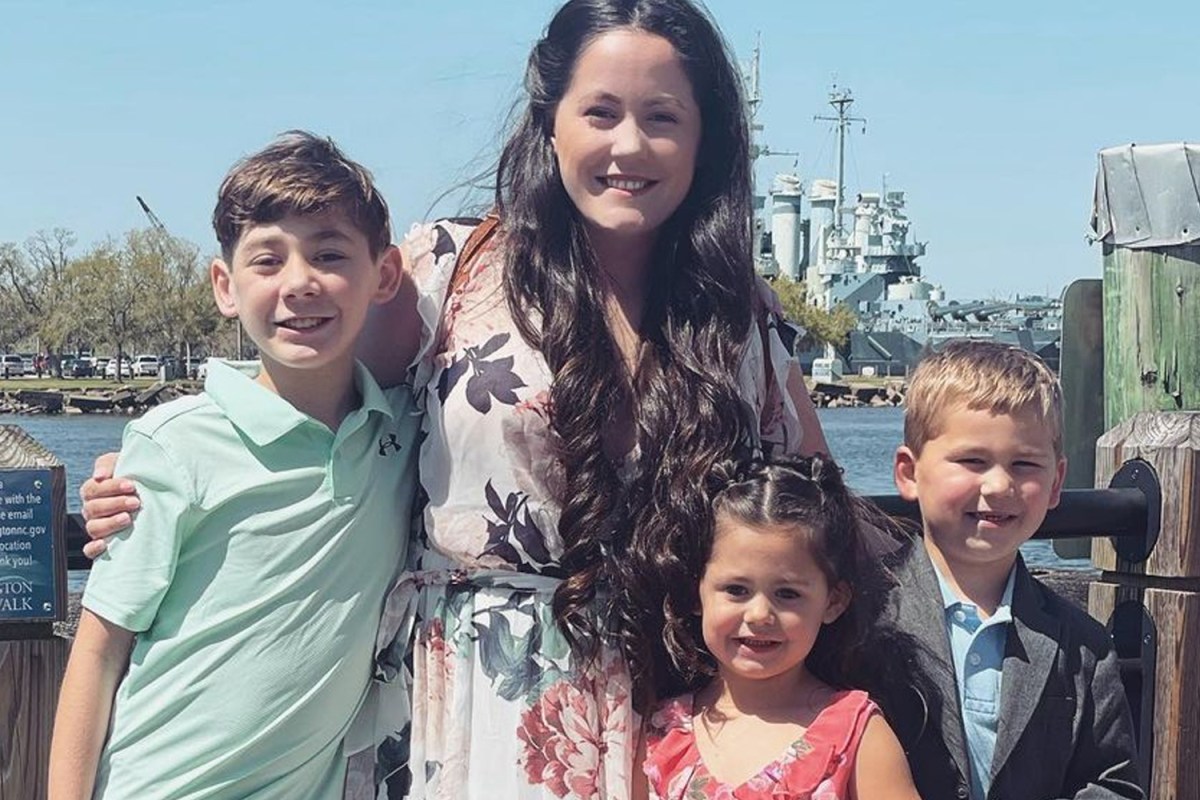 JENELLE Evans celebrated Easter with her husband and children, but without her mom Barbara as the two fight relentlessly for full custody of Jace.

The Teen Mom alum relinquished her son’s custody when he was a baby, as she was on drugs and living a party lifestyle.

Jenelle, 29, took to Instagram to wish her fans a Happy Easter with a series of family photos near the water.

The reality star wore a floor-length white floral dress while posing with her family who stood smiling with the Easter bunny.

The mom of three captioned her first picture: “#HappyEaster everyone! 🐰💗.”

Jenelle’s children, Ensley, 4, Kaiser, 6, and her oldest Jace, 11, were present, despite her mother Barbara maintaining primary custody for the pre-teen.

The TV personality’s controversial husband was pictured, as well as his daughter from a previous relationship, Maryssa, 12, but Barbara was not at the occasion.

The Teen Mom star also posted a shot with just David, captioned: “#EasterSunday , Some bunny loves you. 🐰💋,” and one with just her three kids captioned: “If I know what love is, it’s because of you.” 🥰 #MomLife.”

Jenelle and her mother Barbara have been publicly fighting over the custody of Jace, who has remained in his grandmother’s care since his birth.

In a recent TikTok video, the MTV star claimed that she had taken over the responsibility because her mom can “no longer handle” his behavior.

She told fans: “I have custody of Jace, he lives with me now full time. My kids are happy, healthy, that’s all that f***ing matters.”

Barbara then ensured the public that she still has custody of Jace, though he has moved between their households a few days a week.

Jace’s grandmother told TMZ that her daughter “misspoke” and that the child still lives with her a majority of the time.

Last month Jenelle slammed her mother for ruining her “mentally,” as she claimed she will “always fight” for her son.

The young mom shared a throwback photo of her son from 2013 to her Facebook page, writing: “#Bittersweet I cannot stand my mom once again.

“She mentally ruined me but it’s ok because I will always fight for my son.

“Can’t keep the games going for much longer.”

Jenelle also took to TikTok to update her fans on the situation, as she explained that legal issues were keeping her from speaking candidly.

“Now I know you guys keep asking about my mom and Jace’s situation but right now again, another topic, it’s just not the time to talk about right now legally.

“Going through some stuff and I’ll let you guys know eventually.”

Despite her valiant efforts, some fans believe Jenelle’s parenting techniques to be questionable.

Over the weekend the TV star was slammed for allowing her 11-year-old to make an Instagram account, and later promoting it on her own page to her three million followers.

Many called her a “money grubber” as she urged her fans to follow the child’s new profile.

What to know about the leaked photo of Khloe Kardashian

“Whoaaaaa this feels very wrong,” one wrote, while a second added: “Yeah I don’t think I’d be drawling attention to it if I were her at least not until he was 18 and maybe not even then.”

“The kids are their last hope for a meal ticket,” another speculated, as the mom has also promoted her four-year-old daughter’s Instagram and encouraged her son Kaiser to stream on Twitch.