Quevos on ‘Shark Tank’: 5 Fast Facts You Need to Know 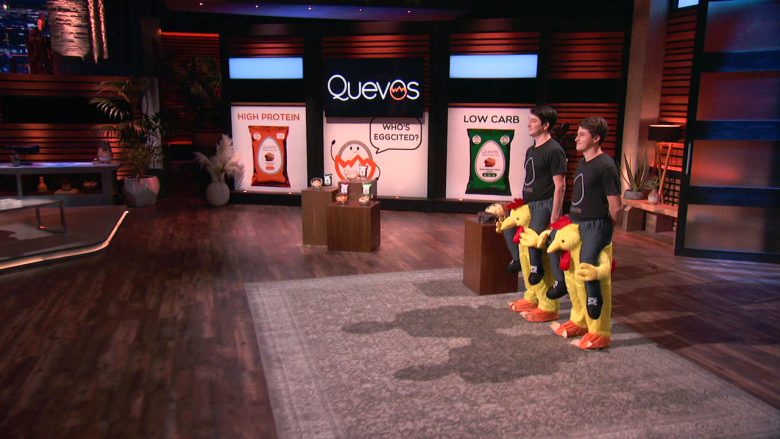 Entrepreneurs Nick Hamburger and Zack Schreier took their egg white snack product, Quevos, to the Sharks on ABC’s Shark Tank to see if they could score a deal from one of the investors.

According to the episode synopsis, the entrepreneurs “pitch their ‘egg-citing’ take on a traditional snack food.” They were able to pitch their product to Sharks Lori Greiner, Mark Cuban, Kevin O’Leary, Robert Herjavec and guest Shark Daniel Lubetzky.

As always when it comes to healthy snacks that promise to taste good, Mark Cuban is the Shark to watch in this case.

Here’s what you should know about Quevos on Shark Tank:

1. The Snacks Are Made of Egg Whites

Quevos are Keto-friendly, low-carb chips that promise to deliver the same satisfying crunch as potato chips that were invented to help Shreier have a satisfying snack he could eat as a Type 1 Diabetic.

“Inspired by the crispy leftovers of an egg-white omelette, Zack knew that it was possible for pure protein to crunch like a chip,” the website reads. “So he got to work developing a low-carb egg white chip alongside his sister Carly and lifelong friend Nick.”

That’s how they came up with the first recipe for Quevos.

2. Five Flavors Are Available to Purchase

At the time of writing, there are five flavors of Quevos available for purchase online.

The current flavors are sour cream and onion, dill pick, quevos rancheros and honey mustard. The chips are delivered within three weeks of the order date. Currently, the company is not offering refunds for any products that arrive within that delivery window.

Each of the flavors has egg whites listed as their first ingredient and butter high up on that list as well.

3. All Quevos Are Gluten-Free

According to the company website, each of the products is gluten-free.

For a serving size of about 35 chips or one bag for the sour cream and onion, dill pickle and quevos rancheros flavors, the calorie count is 140. The bag of honey mustard flavored Quevos contains 150 calories. Each bag contains around 10 grams of fat and 8 grams of protein.

4. The Founder Dropped Out of College to Grow the Business

Hamburger dropped out of university in 2018 to pursue growing his business, according to Biz Journals. He had been attending the University of Chicago.

“We’re always taking feedback and improving,” Hamburger told Biz Journals after explaining that the company had changed its recipes.

According to Biz Journals, the chips are currently sold in 1,000 retail locations like Whole Foods and The Vitamin Shoppe; however, online sales currently account for 80% of the sales.

5. Their ‘Shark Tank’ Episode Was Filmed During the COVID-19 Pandemic

According to the interview with Biz Journals, Quevos went into the Shark Tank in Las Vegas in August. In order to adhere to coronavirus safety protocols, the men weren’t allowed to leave their hotel room for eight days in order to quarantine.

“We couldn’t leave our hotel for eight days prior to going into the tank, so we had a lot of time to practice,” Hamburger told the outlet. “But we were very nervous. Honestly, the most nerve-wracking part was just waiting for the doors to open.

Tune in to Shark Tank to see if the founders are offered an investment from one of the Sharks.

READ NEXT: Slice of Sauce on ‘Shark Tank’: 5 Fast Facts You Need to Know