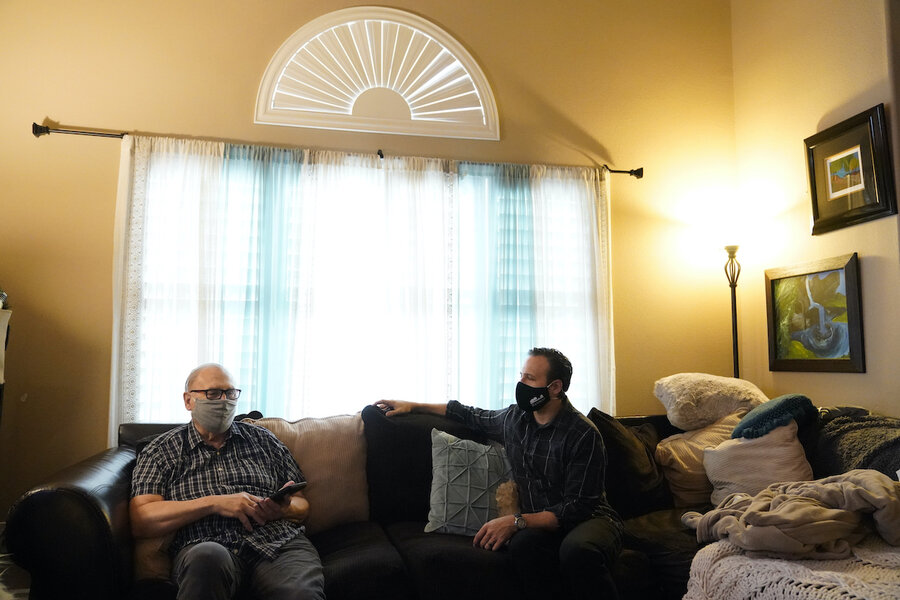 Jury duty notices have set Nicholas Philbrook’s home on edge with worries about him contracting the coronavirus and passing it on
to his father-in-law, a cancer survivor with diabetes who is at higher risk of developing serious complications from COVID-19.

Mr. Philbrook and his wife, Heather Schmidt, of Camarillo, California, have been trying to convince court officials that he should be excused from jury duty because her father lives with them. But court officials told him that is not a valid reason and he must appear in court early next month.

“My main concern is you still have to go into a building, you still have to be around a set number of people,” said Mr. Philbrook, a marketing company editor. “In an enclosed space, how safe are you? It just doesn’t feel like a right time still to be doing that kind of stuff on a normal basis.”

People across the country have similar concerns amid resurgences of the coronavirus, a fact that has derailed plans to resume jury trials in many courthouses for the first time since the pandemic started.

Within the past month, courts in Hartford; San Diego; and Norfolk, Virginia, have had to delay jury selection for trials because too few people responded to jury duty summonses. The non-response rates are much higher now than they were before the pandemic, court officials say.

Judges in New York City, Indiana, Colorado, and Missouri declared mistrials recently because people connected to the trials either tested positive for the virus or had symptoms.

“What the real question boils down to [is] are people willing to show up to that court and sit in a jury trial?” said Bill Raftery, a senior analyst with the National Center for State Courts. “Many courts have been responsive to jurors who have said that they’re not comfortable with coming to court and doing jury duty and therefore offering deferrals simply because of concerns over COVID.”

Also this month, state court systems in Connecticut, New York, and New Jersey, and courts in Denver, Colorado, were among those to suspend all jury trials because of rising virus rates. On Friday, federal officials announced that about two dozen U.S. district courts across the county have suspended jury trials and grand jury proceedings because of virus outbreaks and too few people showing up for jury duty.

Courts are under pressure to resume trials because of the case backlogs piling up during the pandemic.

A few courts have held trials in person and by video conference. Although video conferences may appear to be the best bet, many criminal defense lawyers oppose them because it’s harder to determine witness credibility and to see if jurors are paying attention, said Christopher Adams, a lawyer in Charleston, South Carolina, and president of the National Association of Criminal Defense Lawyers.

“For almost everybody, there is no compelling need for trials to go forward during the pandemic,” he said, adding that most courts are not holding jury trials at the moment.

Mr. Adams said another concern is how representative juries would be if trials went ahead – the virus’ impact and the level of concern about it across different demographics, such as Black, Latino, and elderly populations that are dying at higher rates, could affect who feels safe to serve jury duty.

“What we can’t allow is to have trials where there’s not a fair cross section of the community represented,” he said.

But many criminal defense lawyers are pointing to a major issue with not holding trials – defendants who are detained while awaiting trial. Although jails and prisons across the country have released thousands of low-risk inmates because of concerns about the virus, many people remain locked up in pretrial detention.

A case in federal court in Hartford offers a glimpse of how the virus can upend proceedings.

In October, 150 people were summoned for jury duty for the trial of Amber Foley, who is fighting child pornography charges and demanding her constitutional right to a speedy trial. It would be the first criminal trial in Connecticut, in state or federal court, since the pandemic began.

Only about half the potential jurors showed up and many others were excused for various reasons, including concerns about COVID-19. Only 19 people were left, short of the 31 people estimated to be needed to pick a jury of 12 and one alternate juror.

And then two court security officers tested positive for the virus, forcing the temporary closure of the courthouse for cleaning and prompting Judge Vanessa Bryant’s law clerk to go into isolation and get tested because of contact with the officers.

Judge Bryant decided last week to postpone Ms. Foley’s jury selection until mid-January. Like judges in other parts of the country, she ruled the interests of public health outweigh those of a speedy trial.

“Despite every effort being made by the Court, the Court must reluctantly conclude that it is unable to [enroll] a representative jury from the 200 prospective jurors summoned without jeopardizing the safety of all trial participants,” Judge Bryant wrote in a ruling.

Federal officials have designated one courtroom for jury trials in each of the three federal courthouses in Connecticut, with an entire second courtroom set aside for jurors to gather for breaks and deliberations. Some plexiglass has been installed, air circulation systems have been improved, and seating arrangements have been reconfigured for social distancing. Masks are required.

Ms. Foley has been free on bail awaiting trial. Her lawyer, Todd Bussert, argued in court documents that the coronavirus does not trump Ms. Foley’s speedy trial rights, and that other courts around the country have held trials during the pandemic. He also noted he has two children attending in-person classes in public schools.

“That schools can operate and remain open … even when members of their communities test positive for COVID-19 … belies any hyperbolic assertion seeking to abridge defendants’ rights,” he wrote.

In San Diego, a criminal case had to be postponed last month because too few people showed up for jury duty. Officials twice summoned 900 people, but only about 40 people showed up each time, KGTV reported.

In Norfolk, Virginia, efforts to resume jury trials during the pandemic stalled recently because roughly nine out of 10 possible jurors weren’t showing up in court, The Virginian-Pilot reported.

Failure to report to jury duty is a crime in most places. Punishment can include fines and, in some cases, short jail sentences. Officials in some court systems have said they were considering increasing enforcement to improve response rates.

Mr. Philbrook, the California man, said he and his wife are trying to get a letter from his father-in-law’s doctor saying his health could be put in jeopardy if Mr. Philbrook has to serve jury duty. Mr. Philbrook also is concerned for his own health.

“You just never know with this virus. It seems to not care,” he said. “It doesn’t seem to care how healthy you are or unhealthy you are. You hear about healthy people getting it really badly. That bothers me. I feel I’m healthy. I feel like, OK, if I get it, I should be OK, but I don’t actually know.”

This story was reported by The Associated Press.

Editor’s note: As a public service, the Monitor has removed the paywall for all our coronavirus coverage. It’s free.