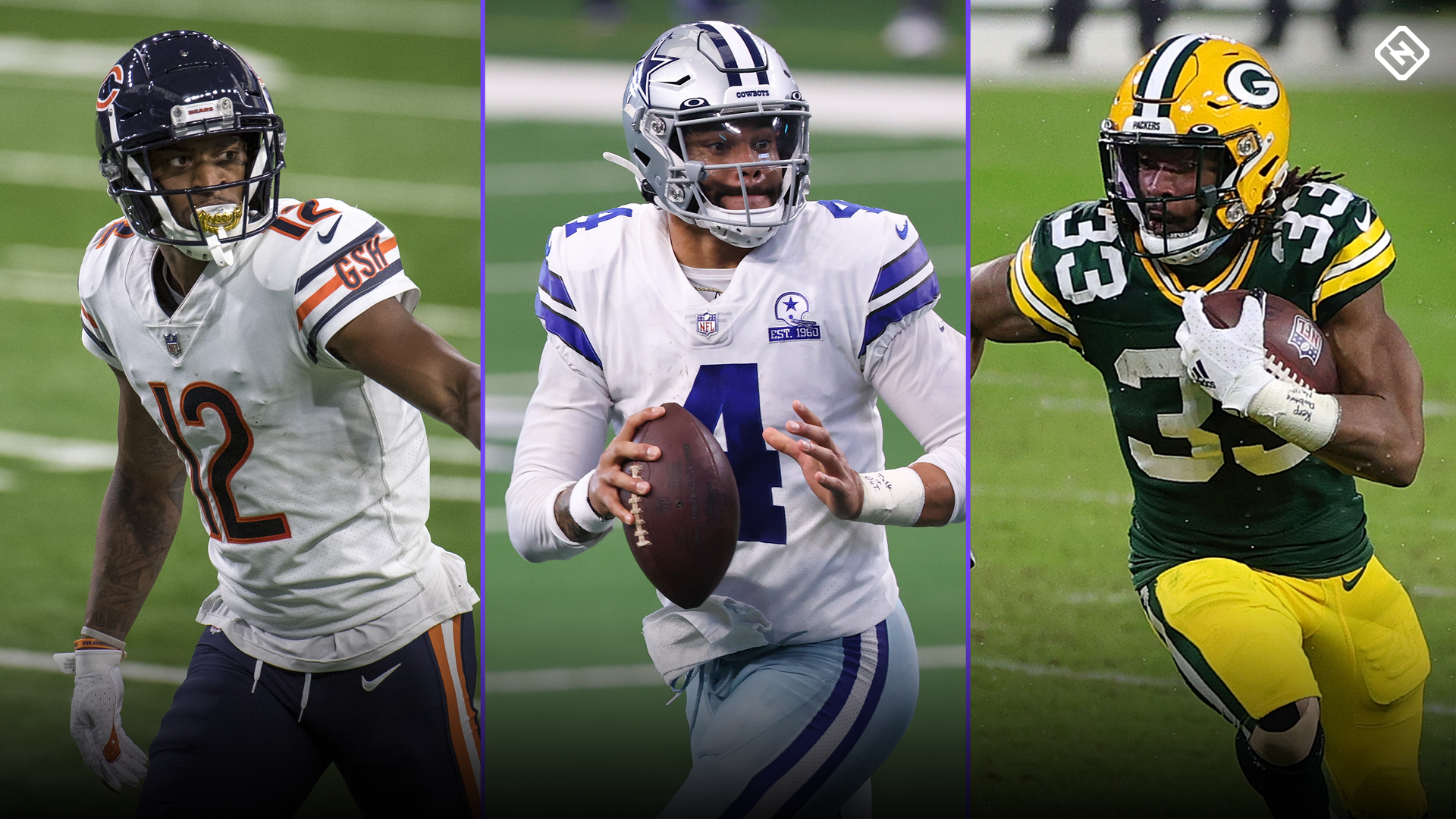 Who are the top unrestricted players in NFL free agency? 2021 brings another strong veteran open market across positions.

There are several splashy targets at wide receiver and plenty of depth for defense, especially at edge rusher and safety. Quarterbacks have one big headliner for now and not much else.

For teams looking to spend their available money under the upcoming salary cap, there are plenty of worthy signings to upgrade rosters, from high-priced commodities to bargain talents.

Here’s an overall ranking of the best overall options and the best by position. Check back for updates as this also will serve as a tracker when players are re-signed, get the franchise tag or land on a new team:

Despite the early season-ending ankle injury as a franchise-tagged QB in 2020, Prescott is a rising top-10 option at the game’s most important position. The Cowboys should be locking him up with a lucrative long-term deal to keep operating their dynamic, loaded passing game.

Godwin has turned into a premier slot receiver at 6-1, 209 pounds. He runs great routes with outside versatility and despite some notable drops, he has the hands to be reliable all over the field. He isn’t close to his prime and the Bucs should do everything they can to keep him for Tom Brady.

Robinson had a massive third season with Chicago while in his prime as a complete target with 102 catches for 1,250 yards and 6 TDs. He’ll be looking to leave Chicago and finally get paired with a top QB.

Barrett cooled from leading the league with 19.5 sacks in his first season in Tampa Bay in 2019, but his massive impact in getting after the quarterback manifested again in the playoffs. The Bucs will do their best to keep him to make another run with their defense in 2021.

Simmons (6-2, 202 pounds) had another big season making plays for Denver with five interceptions and 96 total tackles. He will be a great cleanup man anywhere.

Jones had a second straight big year from scrimmage (1,459 yards, 11 TDs) and remained explosive, averaging 5.5 yards per carry. The Packers will do their best to keep him with Jamaal Williams heading to free agency with A.J. Dillon set to become the new power complement.

Harris didn’t have any interceptions in 2020 after posting 6 in 2019 but he was still very active in coverage to help a struggling overall pass defense and also racked up 104 total tackles.

“Babytron” is a big, speedy field-stretcher (6-4, 215 pounds) and red-zone finisher when healthy but he played in only five games in 2020 after suffering a lingering hip injury. The Lions will try to keep him around as Jared Goff’s go-to guy with Marvin Jones Jr. also being a free agent.

Williams, the Jets’ No. 6 overall pick in 2015, had his delayed big breakout as an interior pass rusher for the other New York team with 11.5 sacks. He is still built to wreak havoc on the middle edge of a 3-4 front.

Henry stayed mostly healthy in 2020 which was big for him, and caught 60 passes for 613 yards and 4 TDs in 14 games. He was underused a little as the Chargers unleashed an aggressive downfield passing game with rookie Justin Herbert. But Henry settled into to be a key target late and would be vital to new offensive coordinator Joe Lombardi’s scheme if re-signed.

Smith-Schuster may have worked his way out of Pittsburgh with his TikTok ticking off Mike Tomlin, but he’s a young slot receiver with high production and massive upside. JuJu sneakily got up to 97 catches for 831 yards and 9 TDs in the Steelers’ dink and dunk passing game.

Between injuries and suspension, Fuller can’t seem to stay on the field to produce big time. The 6-0, 184-pounder has blinding vertical speed as he averaged 16.6 yards per catch on his 53 catches for 879 yards and 8 TDs in 11 games with Deshaun Watson.

David remains a solid, consistent rock of a tackler and rangy playmaker even with a transition in scheme the past two years. He can help out a defense in many ways and also is a seasoned, respected leader.

Sherman played in only five games in 2020 but is coming off a strong 2019 where he showed his old-school physical shutdown stylings and also had 61 tackles. He has been a welcome leader of San Francisco’s secondary and can have the same influence on another team.

Watt has slowed down a little from his superstar status but still had 5 sacks and an interception to make plays for an otherwise weak Houston defense in his final season there. He should find work as an effecitve immediate impact starter in another 3-4 scheme.

Williams has been consistent with his coverage help from free safety with a good nose for the ball and he is pretty solid in run support, too.

Scherff keeps on plugging away as one of the game’s best all-around interior blockers. He still has several seasons to contribute at a high level.

Davis finally broke out as a first-rounder with his size (6-3, 209 pounds) and speed in the Titans’ run-first offense as a great complementary receiver to A.J. Brown for Ryan Tannehill, catching 65 of 92 targets for 984 yards and 5 TDs while averaging 15.1 yards per catch.

Ingram is getting up there and his pass-rush production has gone down with some injury issues. But when healthy, he remains a well-rounded disruptor for either a 4-3 or 3-4 alignment.

Aaron Rodgers’ main snapping man has been a venerable line leader and also continues to be a big part of their run-blocking success.

Dupree is a sturdy pass rusher at 6-4, 269 pounds and was having a big season before his knee injury shortened it to 11 games, in which he still produced 8 sacks.

The 2017 second-rounder delivered a strong third full season as a starter. Moton (6-5, 325 pounds) is best suited to help another team as a run-blocking force on the right side.

Thuney had to play some tackle with the Patriots’ line injuries and reshuffling in 2020 but his usual job is crushing it as a run blocker from left guard with good athleticism for his size (6-5, 308 pounds).

Hill (5-11, 183 pounds) came into his own opposite Jalen Ramsey, a good combination of dynamic ballhawk and aggressive cover man.

Jones used his size (6-2, 199 pounds) well as a fill-in No. 1 after Golladay went down, ending up with 76 catches for 978 yards and 9 TDs. He will be a valuable possession man and reliable red zone target for this likely third team.

Jackson is another nice-sized veteran corner (6-0, 196 pounds). His play outside was key for an underrated and often tricky Bengals pass defense.

Milano battled injury issues in 2020 but he was a playmaking force with 3.5 sacks, an interception and 45 total tackles in his 10 games.

Judon produced 6 sacks in 14 games, a little dropoff from 2019, but he remained an active tackler. He should help another 3-4 team as he’s likely too pricey to keep in Baltimore..

The Chargers traded King, one of the game’s smoothest slot corners, to the Titans in the middle of the season. He also can help a team nicely in the return game.

The former Jaguars standout continued good production for both Minnesota and Baltimore in a split 2020 season but he best fits as a pure pass-rushing 4-3 end.

Maye did more than his part to step up as.an all-around playmaker without Jamal Adams with 2 sacks, 2 interceptions, 11 passes defensed and 88 total tackles

Clowney had more health issues playing only a half-season (8 games) and didn’t record a sack in his next team after the Seahawks. But he can revive his well-rounded presence back in a traditional 3-4 scheme.

Lawson has some untapped pass-rushing upside after posting a career-high 5.5 sacks in 2020 and he’s also pretty sound against the run from 4-3 end.

Floyd found his groove as a pass rusher complementing Aaron Donald from 3-4 outside linebacker with a career-high 10.5 sacks, shattering his disappointment from the Bears.

Johnson uses his size (6-0, 209 pounds) well and adds to the punch of this positional class. He excels at cleaning up against the run (105 total tackles in 2020) and also is solid in coverage for either free or strong safety.

Hilton tends to be overshadowed in this secondary because of Minkah Fitzpatrick and Joe Haden, but he had his best nickel season yet with 3 interceptions, 3 sacks and 51 total tackles.

Samuel was a highly productive and versatile third receiver in Carolina with 77 catches, 851 yards and 3 TDs playing off Robby Anderson and D.J. Moore and also filling some of the pass-catching void of Christian McCaffrey. He should have plenty of appeal elsewhere as a super-young playmaker.

The two-time Pro Bowler is getting up there but at 6-9, 320 pounds, he can provide a few more years of solid left tackle play.

Tomlinson is a pretty mighty 3-4 nose at 6-3, 318 pounds with consistent juice to get into the backfield. He posted 3.5 sacks and 49 total tackles in each of the past two durable seasons.

Okung remains sturdy for his size (6-5, 310 pounds) when healthy, which hasn’t been the case the past two seasons with the Chargers and Panthers. He is a short-term left-side solution for someone.

Drake played 2020 under the transition tag but was short of consistently being featured by Kliff Kingsbury in the Cardinals’ prolific rushing attack. He still racked up 1,092 yards from scrimmage and 10 TDs on 264 touches over 15 games.

Brown does a little bit of everything well inside with a baseline of prolific tackling when healthy plus the capacity to deliver as a cover man and blitzer when needed. He’s best suited to stay in a 3-4 sharing the second-level duties.

Peterson has slowed down from his shutdown level but he remains a savvy, reliable cover man and durable playmaker on the outside. He posted 3 interceptions and 61 total tackles in 2020.

Winston, after a worthy year in Sean Payton’s offense backing up Drew Brees, shouldn’t be totally ignored in free agency again given so many teams having QB concerns and the fact he still has some big upside with that big arm. Should Brees retire, however, he won’t be promoted over Taysom Hill, so a second shot at a starting gig has to be elsewhere.

Williams returned to durable full-time starting status for Buffalo after last having that kind of role with Carolina in 2017. He was a rock with his size (6-6, 330 pounds) and power for the right side.