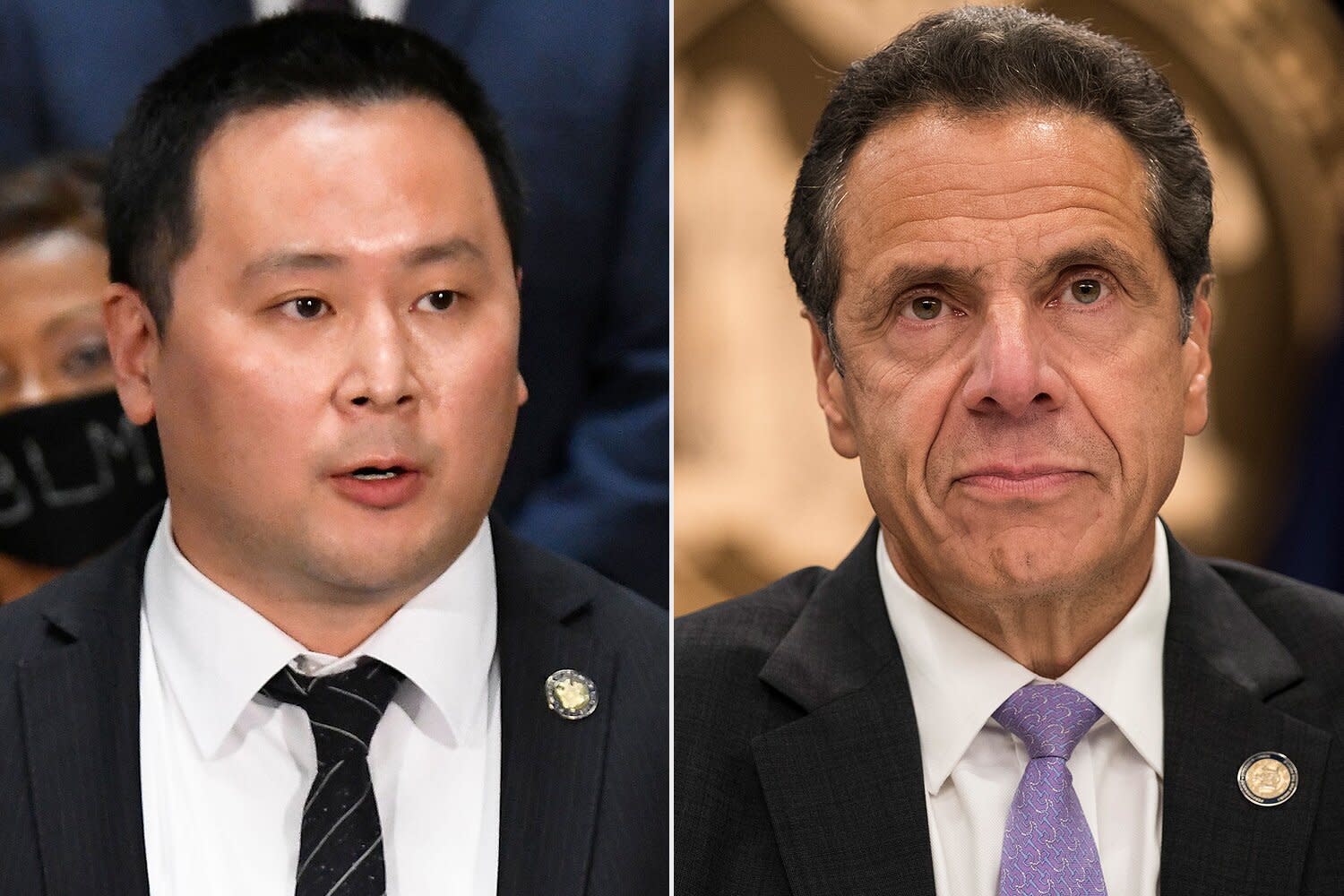 A New York assemblyman is standing by his account of an “angry” phone call he says he received last week from Gov. Andrew Cuomo, who denies he yelled and threatened the Democratic lawmaker’s career.

Ron Kim represents the New York City’s Queens borough in the state legislature. He told CNN on Wednesday that Cuomo, 63, allegedly yelled at him for 10 minutes and told Kim he could “destroy” his career.

“No man has ever spoken to me like that in my entire life,” Kim, 41, said of the conversation, which he said his wife also heard snippets of as it happened.

Cuomo adamantly denies Kim’s version of the call, which the assemblyman said was regarding a recent comment he gave to The New York Post.

“Mr. Kim is lying about his conversation with Governor Cuomo [last] Thursday night,” Rich Azzopardi, a spokesman for Cuomo, told PEOPLE in a statement.

“I know because I was one of three other people in the room when the phone call occurred,” Azzopardi said. “At no time did anyone threaten to ‘destroy’ anyone with their ‘wrath’ nor engage in a ‘coverup.’ “

“A lot of people in New York state have received those phone calls,” de Blasio said on MSNBC.

Kim was one of a number of Democrats who told the Post that Cuomo’s top aide, Melissa DeRosa, had said the governor’s office didn’t release complete numbers on nursing home COVID-19 deaths — despite a request from state lawmakers — because they feared those numbers might be used in a Department of Justice investigation under former President Donald Trump, a Cuomo foe.

The governor admitted Monday that his administration made a “mistake” in the way it released information about nursing home deaths. But he reiterated that “all the deaths in the nursing homes and in the hospitals were always fully, publicly and accurately reported.”

A recent report by New York Attorney General Letitia James found that the state’s health department was not presenting the full total of nursing home deaths.

At issue was the categorization. New York state is unique among the country’s epicenters in that it was only counting deaths happening inside nursing homes, rather than including nursing home residents who fell ill and later died at the hospital.

Deaths outside a nursing home were included in another category.

In the wake of the attorney general’s report, updated data from the state — which had said it was auditing the numbers — showed nursing home-related deaths of some 15,000, up from the earlier toll of about 8,500.

“Basically, we froze,” DeRosa told Democratic lawmakers on the video conference call earlier this month, of why they had not provided all of the numbers to lawmakers. “Because then we were in a position where we weren’t sure if what we were going to give to the Department of Justice, or what we give to you guys, what we start saying was going to be used against us while we weren’t sure if there was going to be an investigation.”

Cuomo’s office has since released a full transcript of the call.

In a statement, DeRosa said she “was explaining that when we received the DOJ inquiry, we needed to temporarily set aside the [state legislature’s] request … We share the same goal of keeping New Yorkers as healthy as possible during the pandemic.”

Cuomo has defended his leadership style amid criticism — first from conservatives, pointing to the lack of transparency over nursing homes, and now more and more Democrats. He had previously earned widespread praise for his daily pandemic briefings.

“These are public health decisions, they’re not local political decisions, and they have to be made on a public health basis,” Cuomo said Monday. “This virus is serious. And I understand these decisions are difficult politically. … If you made theses decisions via a poll, none of them would happen, and more people would die.”

Kim says Cuomo was angry he was one of the Democratic lawmakers who relayed details of DeRosa’s conference call to the Post. When Cuomo called the assemblyman last week, Kim says he was at home and bathing his young children.

“Gov. Cuomo called me directly on Thursday to threaten my career if I did not cover up for Melissa [DeRosa] and what she said,” Kim told CNN. “He tried to pressure me to issue a statement, and it was a very traumatizing experience.”

Kim told the network — where the governor’s brother, Chris Cuomo, is an anchor — that he recalled the elder Cuomo saying, “We’re in this business together and we don’t cross certain lines.”

“And he said I hadn’t seen his wrath and that he can destroy me,” Kim added.

In the wake of Cuomo’s denial, Kim pushed back.

“The governor can personally attack me all he wants in an effort to distract us from his incompetent management,” he said in a statement shared on social media. “But these facts are not going away because they are the facts and are unacceptable.”

As information about the coronavirus pandemic rapidly changes, PEOPLE is committed to providing the most recent data in our coverage. Some of the information in this story may have changed after publication. For the latest on COVID-19, readers are encouraged to use online resources from CDC, WHO, and local public health departments. PEOPLE has partnered with GoFundMe to raise money for the COVID-19 Relief Fund, a GoFundMe.org fundraiser to support everything from frontline responders to families in need, as well as organizations helping communities. For more information or to donate, click here.