Kawhi Leonard’s talk of opting out is business as usual 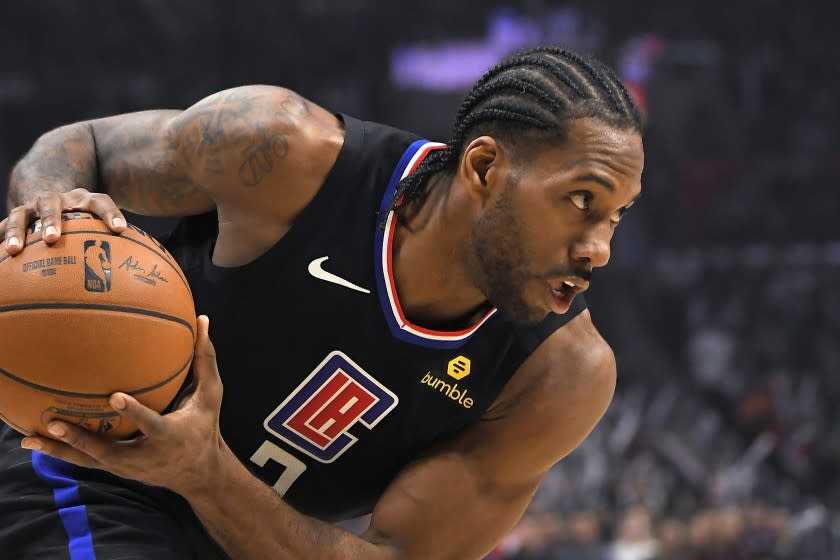 When Kawhi Leonard signed with the Clippers in 2019, the All-Star forward mentioned the team’s ready-to-win roster appealed to him as much as the chance to return to his Southern California roots.

But the Clippers last season never appeared comfortable with their newfound status among the league’s upper tier of championship contenders. The destination — a championship podium covered in confetti — was clearly understood. Less so was their understanding of the route to get there.

Monday, on the eve of a new season, Leonard suggested the Clippers are better prepared for what awaits them.

“Last year was the first year some of the guys had targets on their backs, meaning picking us to either win or go deep in the playoffs,” Leonard said. “And I think that carries over to this year. They know what’s expected, and know what we want to do.”

No one needs to tell Leonard what it is like to play under a spotlight — and not only because of his experience winning titles in San Antonio and Toronto. For the second time in Leonard’s last three seasons, there will be as much intrigue about the free-agency decision he will make after the season as how he will perform during it. Leonard holds a player option for the 2021-22 season but can become an unrestricted free agent by declining it.

“Obviously, if I’m healthy, the best decision is to decline the player option, but that doesn’t mean I’m leaving or staying,” Leonard said Monday, the first time this season he discussed his future. “I’m focused on the season, like I said. We’ll talk about that when the time is right.”

After Leonard declined his option with Toronto in 2019, the Clippers, Lakers and Raptors revolved their entire offseason plans around his decision as an unrestricted free agent.

The same scenario seems likely to play out next summer. With Giannis Antetokounmpo, LeBron James, Anthony Davis and Paul George off the 2021 free-agent board after signing lucrative extensions in recent weeks, multiple teams expecting a free-agency bonanza now possess huge amounts of cap space with few elite targets to entice. The combination would make Leonard, who is not eligible to sign an extension this season, once again the center of the basketball universe should he choose to become an unrestricted free agent.

There was nothing concrete in those words to settle the nerves of Clippers fans worried he might bolt. The team’s agreement with George on a four-year extension earlier this month led to some optimism about what it might mean for retaining Leonard, but pressure remains on the organization to persuade him to stay.

The team’s recent deals, which include Monday’s four-year extension with reserve guard Luke Kennard that is worth up to $64 million, tie up much of the team’s financial future around an expensive core of George, Kennard and Marcus Morris that they must hope Leonard will want to stay with for years to come.

But there was hardly anything unexpected or revelatory about Leonard’s expected approach to next summer, either.

A defensive player of the year, two-time champion and two-time Finals most valuable player, Leonard has accomplished nearly everything during his nine previous seasons. There is something only players with at least 10 years of service can do in the NBA — sign a contract worth 35% of a team’s salary cap, the highest percentage allowed under the collective bargaining agreement.

After leaving money on the table throughout his career in order to maintain flexibility, Leonard structured his first contract with the Clippers to leave the opportunity to enter free agency after his 10th NBA season and thus sign the largest contract possible. The Clippers can offer up to four years.

Exercising his option would provide a player with a history of injuries — and who will turn 30 in June — the short-term guarantee of $36 million in 2021-22, which is about $3 million less than he would earn if he re-signs as a free agent on a maximum deal.

But for a superstar of Leonard’s caliber, there could be minimal downside to opting out, no matter his health, if the example of Kevin Durant is any indication. Despite rupturing an Achilles tendon only weeks before free agency in 2019, Durant — who was also nearing 30 at the time — went to Brooklyn with a four-year contract worth $164 million.

Leonard has played amid swirling rumors about his future before, but a lawsuit about his past has added a new wrinkle this season. Last week, Johnny Wilkes, the self-described best friend of Leonard’s uncle Dennis Robertson, sued the team and consultant Jerry West for $2.5 million he said he was promised by West if he helped the team sign Leonard in 2019.

The NBA is investigating the allegations, which Leonard, West and the team have denied. Commissioner Adam Silver said Monday that the league begins its investigations with “always a presumption of innocence.”

“If there were a circumstance in which a player were receiving value or a representative of a player were receiving value outside of the scope of a contract that could, potentially, be a rules violation,” said Rick Buchanan, the NBA general counsel. “We are reviewing this with the cooperation of the Clippers and as the facts develop we will proceed accordingly but at this point it’s a little bit premature to make any judgments as to whether any of these allegations will be borne out.”