I tested Kim Kardashian and Khloe Kardashian’s KFC orders, and I was pleasantly surprised by the healthier option 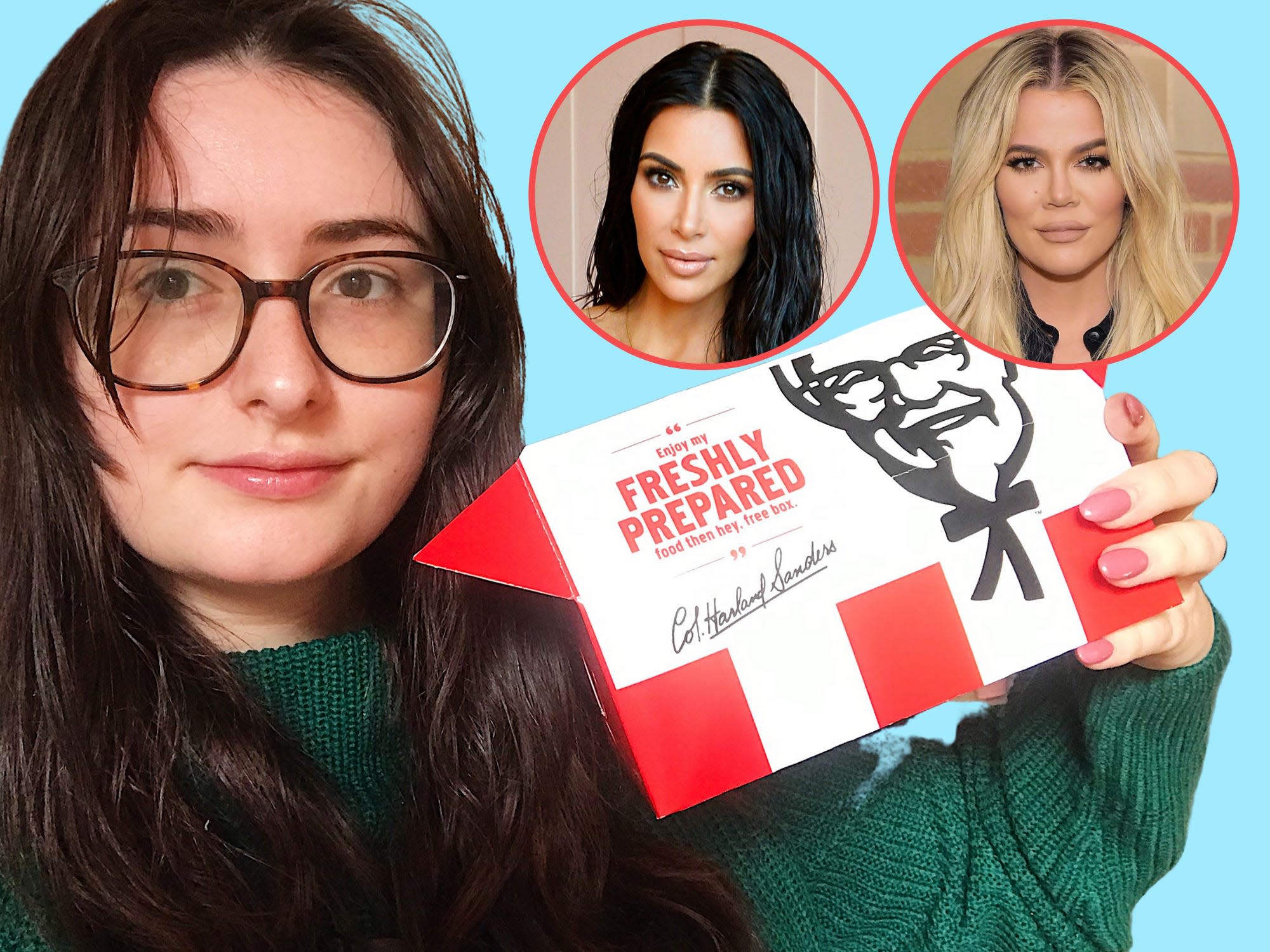 Kim and Khloe Kardashian are both known for their crack-of-dawn workouts, intense diets, and rocking physiques – but that doesn’t mean they don’t get KFC every now and again like the rest of us.

After trying and comparing Kim Kardashian’s and Kylie Jenner’s McDonald’s orders, I decided to put two more Kardashian fast-food orders to the test. While Khloe Kardashian chooses a lower-calorie option when she swings by the fast-food chain, Kim apparently goes all out with crispy fried wings, fries, and a biscuit.

Here’s what I thought about Kim Kardashian and Khloe Kardashian’s KFC orders.

According to Shape, Khloe orders the Kentucky grilled chicken breast with kernel corn and green beans on the side, which comes to 400 calories.

In addition, while one of Khloe’s favorite sides is green beans, I couldn’t find them at any locations near me. Instead, I opted for the coleslaw, which added 90 calories to Khloe’s original order.

The meal came with a half ear of corn on the cob wrapped in foil, one biscuit, a cookie, and the grilled chicken breast for just $5.

I ordered the food to come to my apartment. Unfortunately, when my order arrived, the box was falling apart due to the heat and moisture of the chicken breast. Eventually, it completely gave way and I had to transfer everything to a plate.

By far, the pièce de résistance of the meal was the chicken breast.

Khloe Kardashian explained she usually orders the grilled chicken breast because it’s lower in calories than the chain’s fried options, yet still delicious.

“Grilled chicken is your friend at KFC. The fried options literally add hundreds of calories to the same serving size,” she told Shape. “I promise it’s still ‘finger-lickin’ good.'”

I was immediately impressed by the chicken’s moist texture and flavorful seasoning.

It really did look like a homemade chicken breast. However, while the chain advertises the chicken as “slow grilled,” I thought it more closely resembled roasted chicken. Despite that fact, the chicken breast exceeded my expectations.

The initial disappointment caused by the box breaking was instantly forgotten after I took a bite.

The chicken breast’s skin was crispy, but underneath the meat was moist, flavorful, and well-seasoned with pepper and other spices.

I was also impressed by the corn on the cob, especially for a fast-food side dish.

It looked and tasted just like homemade corn in the summertime.

That said, I thought it could have used a little more flavor.

The corn needed a little butter, salt, and pepper to truly impress me. However, for a relatively healthy fast-food item, it fit the bill.

With green beans unavailable at my local KFC restaurants, I ordered a side of coleslaw instead. The decent-sized portion cost $2.

While I couldn’t try Khloe’s choice of green beans, I thought the coleslaw was a pretty good alternative if you’re trying to get in some extra vegetables.

The coleslaw was fresh, tangy, and added a crunchy element to the rest of the meal.

I could really taste the carrots but, to me, the dressing was a little thin.

I thought this meal was well worth it for a family dinner or someone trying to eat on the healthier side.

For just $7 in all, I got a beautifully seasoned and filling chicken breast, a biscuit, corn, a cookie, and coleslaw. While I thought the packaging should have been changed to accommodate the moist, juicy chicken, I was truly blown away by how much I actually liked this meal.

I was anxious to see how Kim Kardashian’s fried meal would compare.

She told People her “fave order” from the chicken chain is extra-crispy chicken wings and a biscuit with honey.

While in Paris in February 2020, Kardashian and her husband, Kanye West, also stopped by a KFC to order a bucket of fried chicken. In a video posted online, Kardashian could be seen asking West about ordering fries before being pulled away from the self-ordering kiosk machine.

To get the full Kim Kardashian KFC ordering experience, I opted for the chain’s crispy wings, biscuit, honey sauce, and secret recipe fries.

The wings by themselves cost $5, plus $1.89 for two biscuits and $2 for fries at the location I ordered from. The extra sides made this meal more expensive than Khloe’s order, but it still seemed affordable — especially for the amount of food I received.

The meal came with six wings.

Kardashian didn’t say whether she usually orders her wings with sauce or not, so I just ordered a box of plain wings in KFC’s original recipe seasoning.

Despite being “unsauced,” the wings had a slight kick to them.

I was pleasantly surprised by how much flavor the fried batter had. However, I definitely thought the wings could have been a little crispier.

The breading was slightly chewy and didn’t have that distinct crunch I usually look for in fried chicken.

The meat was super juicy and practically fell off the bone.

I tried the wings plain and with the chain’s ranch dipping sauce. Both ways, I thought they were delicious and filling. I’d definitely order them again, despite the breading being slightly under-fried for my liking.

The biscuit was slightly dense, and I wasn’t a huge fan of the honey sauce.

While I’m well aware of Kim Kardashian’s love for honey when it comes to her fast-food orders, I didn’t like the KFC honey sauce nearly as much as the reality star’s McDonald’s nuggets and honey combo.

The sauce was sickeningly sweet, and I didn’t enjoy knowing I was eating honey mixed with corn starch, sugar, and artificial flavors.

The fries, however, were super crunchy and delicious.

That said, I definitely didn’t think they were necessary to enjoy the meal, which ended up being over 1,000 calories in total.

All in all, I was really torn about which sister’s meal I preferred.

However, in the end, I had to give it to Khloe Kardashian. Her order was filling, delicious, and surprisingly satisfying. I thought the high quality of all the menu items made it taste like a homemade meal.

While I was initially trying to avoid fast food in favor of healthier options in the new year, Khloe’s order might become a new go-to if I’m craving some “finger-lickin'” goodness.