How Detroit Chefs Are Feeding Those In Need : NPR 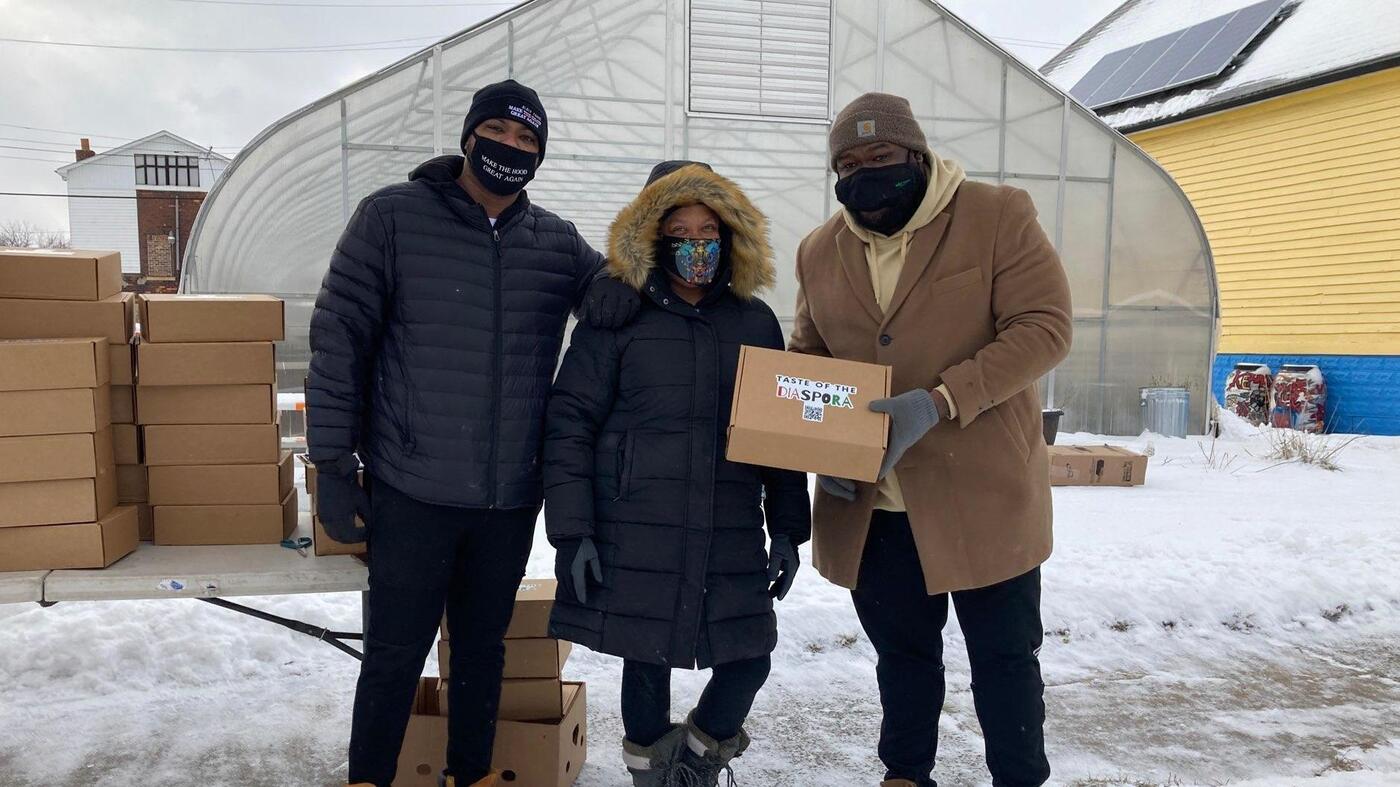 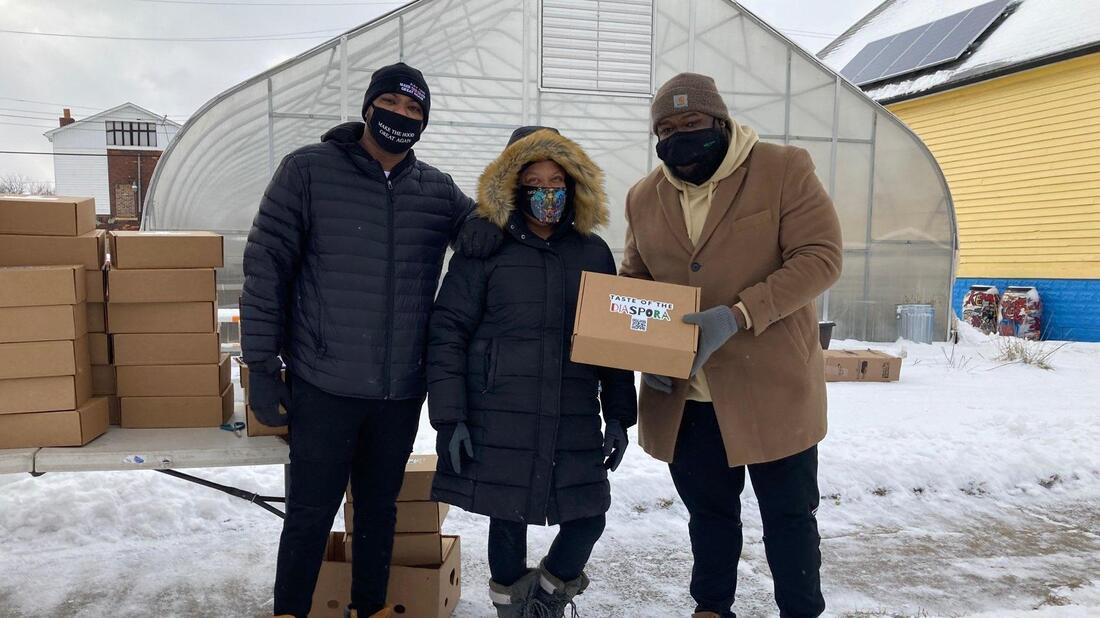 From left, Raphael Wright, Ederique Goudia and Jermond Booze, the team behind Taste the Diaspora, pictured with shoebox lunches in February. 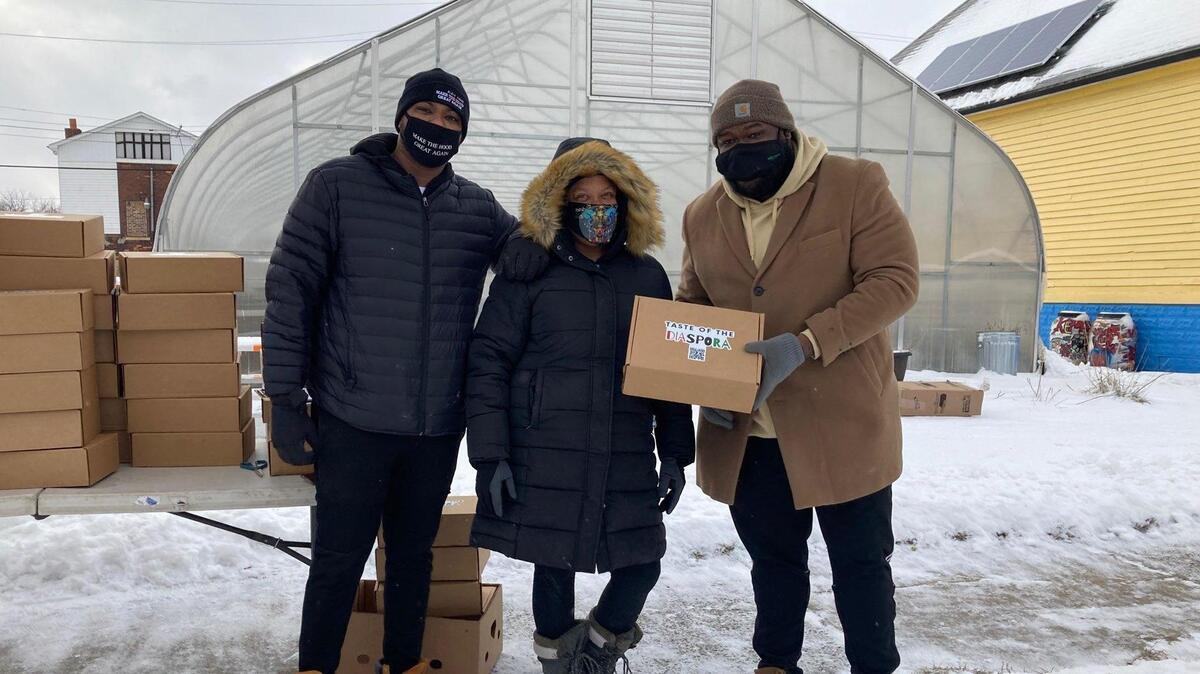 From left, Raphael Wright, Ederique Goudia and Jermond Booze, the team behind Taste the Diaspora, pictured with shoebox lunches in February.

It’s been just over a year since Michigan’s restaurants were forced to close indoor dining for the first time.

In that time many chefs pivoted from their restaurants to working with nonprofit groups on a new task: feeding their increasingly hungry communities.

The pandemic has exacerbated food insecurity across the country. In Detroit, it was already 39% before the pandemic.

“Once the pandemic hit, of course, that number heightened dramatically,” chef Ederique Goudia tells All Things Considered. “Now we have our next door neighbors, our parents, our sisters, our friends who are now food insecure as well.”

Goudia was just named one of Detroit’s “food fighters” by the Detroit Free Press for making a positive impact on her community. In addition to being the co-owner of Gabriel Hall, an upcoming creole restaurant, bar and music venue, Goudia works with groups promoting food access.

During the holiday season, she started working as the lead chef with Make Food Not Waste. The Detroit-based group pushes cooks and consumers to prevent food from being wasted. Goudia and the team made and gave away meals for 5,000 people in Detroit on Thanksgiving, before doing it again for 6,000 people on Christmas.

Their work has continued, feeding 90 families a week with food that would otherwise end up in a landfill.

But they’re not “scraps,” she says. “These meals were something that people could be proud to put on their tables and share with their families. … This really should be done with some dignity.”

But she thinks the phrasing is problematic.

“Deserts mean that nothing can grow, sustain life. Detroit has extremely fertile soil and, as a matter of fact, Detroit has over 1,800 farms and gardens all over the city. The proper term is food apartheid.”

Calling attention to those local farms and gardens was part of the reason behind Goudia’s most recent initiative, Taste the Diaspora.

Goudia partnered with entrepreneur Raphael Wright and chef Jermond Booze for the Black History Month project to celebrate the work of Black chefs. Each week in February, the group worked with local Black farmers and food makers to create dishes from different parts of the African diaspora. They created hundreds of “shoebox” lunches to sell in Detroit, and another 100 to give away to low-income families.

“We not only highlighted and celebrated the Black chefs and restaurants and put money in their hands, but we also wanted to make sure that we celebrate and highlight the ones that are growing the food and then making the food as well,” Goudia says.

For Raphael Wright, in addition to Taste the Diaspora, he’s working to bring a new neighborhood grocery store and market garden to the heavily Black Jefferson-Chalmers neighborhood on Detroit’s east side — to alleviate what he calls the “food swamp.”

“You have on every corner a convenience store, liquor store, gas station, fast food spot, a Coney Island,” Wright says. “That’s food, but could you live off of that every day?”

Wright says beyond the impoverished communities who are food insecure because of cost, many Detroiters are in a bind because they don’t have the time in their day to go to a grocery store and prepare a meal.

But with more people cooking at home because of the pandemic, Wright says he’s seeing “an opportunity for us, a unique one at that, to display what food is and how we need it in our communities to actually grow and be better people.”

Goudia, meanwhile, says her work “is about making that impact and saying and showing people that look just like me that you can do it too.”

Jason Fuller and Sarah Handel produced and edited the audio version of this story.