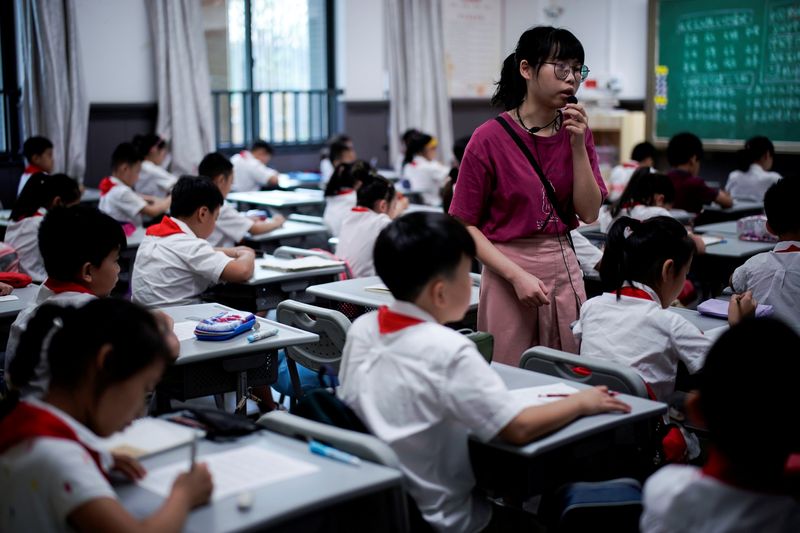 BEIJING (Reuters) – A plan in China to get boys to do more sports as a way of making them more manly has reopened a debate between those who urge more diversity and those backing a more masculine society.

The education ministry has said it aims to increase the number of physical education teachers and revamp gym classes to boost the “masculinity” of students.

The plan was in response to a proposal last May by a member of the Chinese People’s Political Consultative Conference, an advisory body to the government, calling for help for boys who have become too delicate, timid and effeminate after being schooled mostly by women teachers, the ministry said.

A hashtag on the ministry’s plan has chalked up 1.5 billion views on the Weibo (NASDAQ:) social media platform by Wednesday.

“It’s hard to imagine such effeminate boys can defend their country when an outside invasion looms,” said one Weibo user.

Like most Asian nations, China has a traditional bias for sons and decades of a one-child policy has led to what some people see as a tendency for parents to molly-coddle their boys.

But the idea of getting boys to toughen up through physical activity has gained currency in recent years.

Some affluent parents, worried that their sons are too fragile, are sending them to private boot camps that promise to turn them into “real” men through army-style drills.

“The proposal has represented some stereotypes in China on male masculinity, which is against gender equality and diversity, as it sees being effeminate as negative and dangerous while masculinity is useful to the Chinese nation,” Li told Reuters.

Yang Li, 25, a Beijing-based marketing manager, said the plan could lead to more bullying. Yang said he was once scolded by a male teacher for walking in his school yard like a model on a catwalk.

State media, trying to calm the debate, published reports this week saying certain temperaments and characteristics should not be associated with either sex.

The Xinhua news agency, quoting experts, building “masculinity” should not be about emphasising gender differences but about developing healthy physiques and inner strength.

Disclaimer: Fusion Media would like to remind you that the data contained in this website is not necessarily real-time nor accurate. All CFDs (stocks, indexes, futures) and Forex prices are not provided by exchanges but rather by market makers, and so prices may not be accurate and may differ from the actual market price, meaning prices are indicative and not appropriate for trading purposes. Therefore Fusion Media doesn`t bear any responsibility for any trading losses you might incur as a result of using this data.

Fusion Media or anyone involved with Fusion Media will not accept any liability for loss or damage as a result of reliance on the information including data, quotes, charts and buy/sell signals contained within this website. Please be fully informed regarding the risks and costs associated with trading the financial markets, it is one of the riskiest investment forms possible.