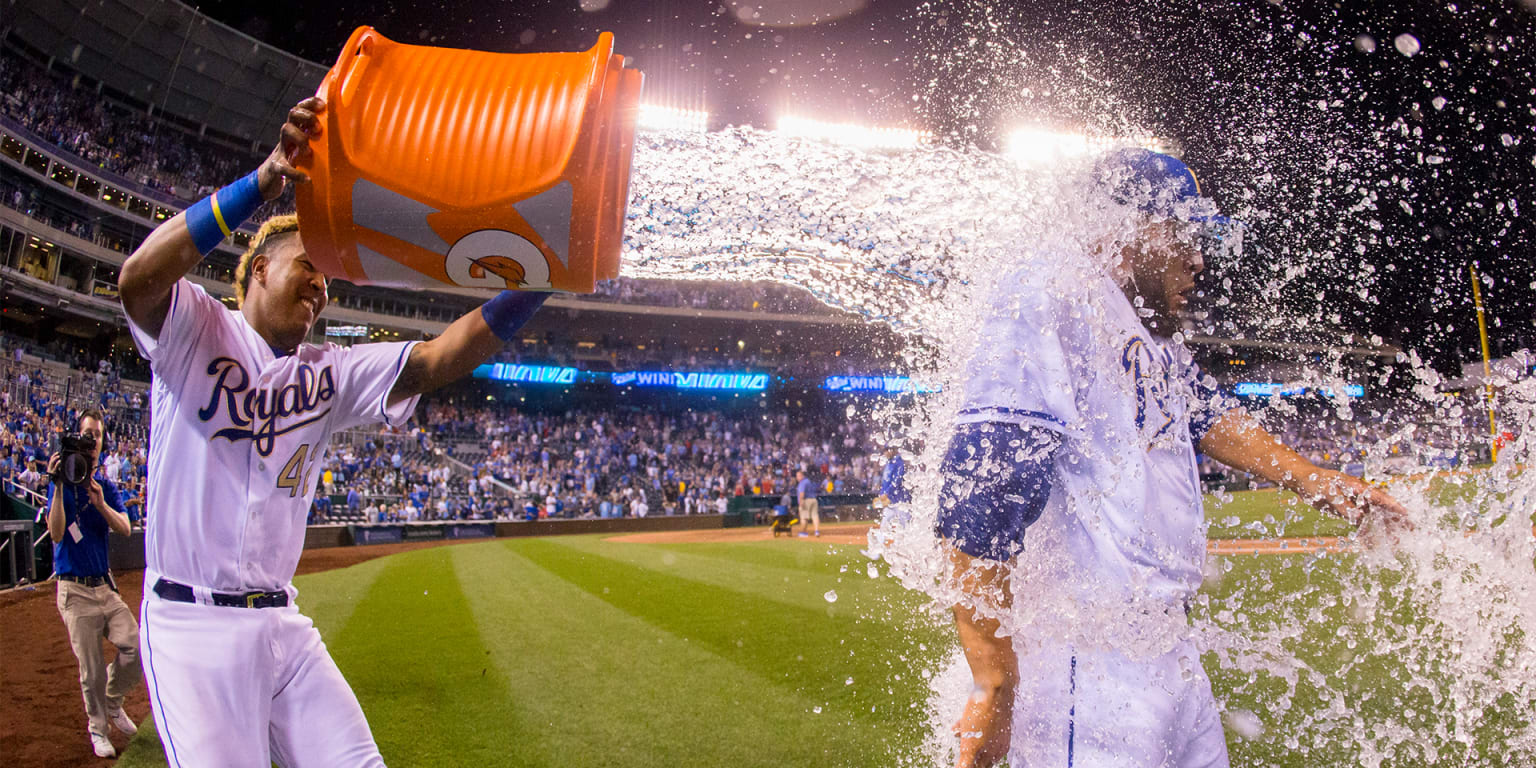 KANSAS CITY — Here’s a couple of little-known facts about the now famous “Salvy Splash” — when Royals catcher Salvador Perez douses Fox Sports Kansas City’s star of each game with the leftover ice and liquid from the orange Gatorade bucket in the dugout: Perez didn’t originate it. And there

KANSAS CITY — Here’s a couple of little-known facts about the now famous “Salvy Splash” — when Royals catcher douses Fox Sports Kansas City’s star of each game with the leftover ice and liquid from the orange Gatorade bucket in the dugout: Perez didn’t originate it. And there was a chance it could have been called something other than the Salvy Splash.

While the Salvy Splash — once featured on a three-dimensional billboard on the edge of Westport in Kansas City prior to the 2016 season — started to become Perez’s signature postgame move around ’13, it was who originated it.

“I can’t remember the year, but it was probably 2011,” FSKC reporter Joel Goldberg, who interviews the postgame stars, recalled, “and the first ‘Splash’ I remember came from Gordo. It was a getaway night to St. Louis, and I just remember I got nailed with Gatorade and my neck was sticky the whole flight to St. Louis. Thankfully it’s a quick flight.”

Perez likely started his version of the Splash sometime in 2013, Goldberg said.

“I don’t remember a singular moment,” Goldberg said. “It just started to become a routine. Guys weren’t expecting it at first. Now, Salvy and I kind of have to choreograph it a little.”

But the Salvy Splash almost never was because Perez wasn’t supposed to have been named Salvador.

“When I was born, my mom had to stay in the hospital,” Perez told MLB.com. “My dad took me home and I was a healthy baby. She told him to tell [the authorities] that my name should be ‘Johan Salvador Perez.’ But somehow when my dad went to tell them my name, he forgot [about Johan].

“So I just became Salvador.”

“Johan” was added as his middle name later.

Of course, fans are waiting patiently for the return of the Salvy Splash, which likely won’t happen until they return to the stadium. Due to Perez missing all of 2019 after Tommy John surgery, fans haven’t seen it since ‘18.

Well, actually, there was one Splash after the final game of the 2019 season: Perez and Gordon doused manager Ned Yost after his last game before retiring.

“It’s always been amazing to me how many fans stick around after the game just to see the Salvy Splash,” Perez said. “And I have a feeling there will be a lot of them the next time we see it.”

Jeffrey Flanagan has covered the Royals since 1991, and for MLB.com since 2015. Follow him on Twitter at @FlannyMLB.