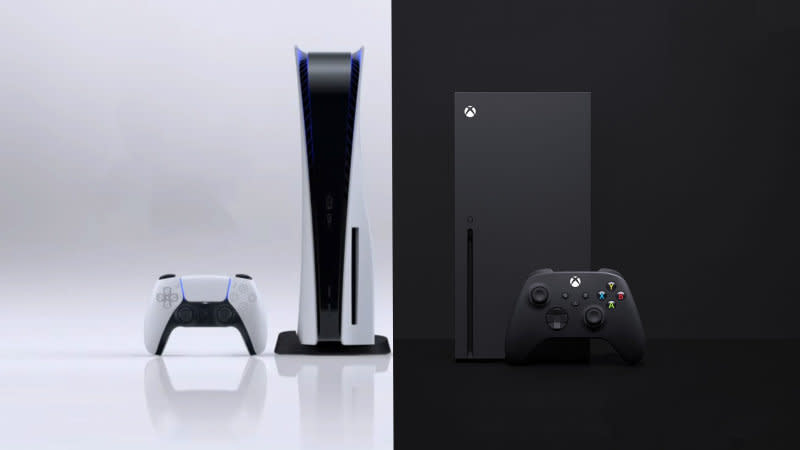 With all the madness going on in the world right now, sometimes it’s nice to take a step back and focus on things that don’t really matter. Fun distractions have been a necessary component of a healthy human life since the beginning of time, and they’re more helpful than ever in the year 2020. Of all distractions you could choose to throw your focus at, video games are probably some of the most fun. That’s why it’s so exciting for us gamers that we’re currently in what’s known as a new console launch year. What does that mean? It means your old Xbox and Playstation are about to be officially obsolete. It’s next-gen time, baby.

OK, that last sentiment was what we call in the biz, “hyperbole.” Your PS4 and Xbox One aren’t magically going to be obsolete this year, at least not yet, but this is the beginning of the end. If you haven’t heard the news, both Sony (Playstation) and Microsoft (Xbox) are planning to release their shiny new video game consoles to the world this coming holiday season in the form of the Playstation 5 and the Xbox Series X (as well as a heavily rumored lower-tier Xbox likely to be called the Xbox Series S). Most anyone reading this will probably know that those consoles are seen as two of the three top competitors in the space, with the Nintendo Switch also occupying kind of a mushy middle between current and next-gen technology, since Nintendo often chooses to release its new consoles staggered outside of the upgrade schedule silently agreed upon between Sony and Microsoft.

So what is the point of this post? Well, we’re all still stuck at home for the most part, we’re bored, and we’re dreaming of the future, so we figured we’d draw our lines in the sand way too early and decide on our next-gen video gaming plans right now, so we can visualize the digital future we want, come this Q4, and manifest it for ourselves. And maybe, just maybe, we can help some of you who might be on the fence make some decisions as well. This is Autoblog, so we’ll be trying to focus on the racing and driving game experience for each console first and foremost, but everything, of course, is on the table.

Here are the facts: At the time of this writing, both the Playstation 5 and the Xbox Series X have been announced and revealed, but neither exact launch dates nor prices have been revealed for either console. Microsoft and Sony often enter into a game of chicken when it comes to revealing console price during a launch year. The reason for this, likely, is to see what the competitor thinks they can charge for this new, often extremely technologically impressive, piece of technology. And subsequently, what the public reaction is to the price that was chosen. The internet at large seems to think both the PS5 and Series X will come in at around $500. Personally, I think that’s a pipe dream and you should expect a $600 starting price for both consoles at minimum.

Outside of the brand new consoles, the Nintendo Switch is also kicking around, arguably stronger than ever with recent blockbuster exclusives in the form of “Pokemon Sword” and “Shield,” “Animal Crossing New Horizons” and another all-but-guaranteed monster hit on the way with the heavily rumored “Super Mario” 35th Anniversary remake collection. Oh, and don’t forget the Switch also exclusively runs probably the greatest Kart Racer ever made, “Mario Kart 8 Deluxe.”

Personally, I’ve been an Xbox and Nintendo guy for the past few generations, I do have a Nintendo Switch, but I do most of my gaming on my Xbox One S. I’ve been thinking long and hard about my plans for this next generation, and honestly, I don’t know if I’ve seen anything exciting enough from either company to convince me to invest my money at this point. My most-played game on Xbox is definitely Rocket League. If you’ve never heard of it, picture playing a soccer match (football for the non-Americans in the crowd) with RC cars. Rocket League is available on pretty much every platform at this point, and performs just fine on console, but the holy grail of Rocket League performance is definitely on PC. On a PC you can run helpful training mods, you don’t have to worry as much about frame latency, and since most PCs connect to a monitor rather than television, you’ll also experience a lot less input lag (the time in between pressing a button on your controller and the game recognizing and performing that action). Rocket League is a ridiculously precise game where milliseconds matter. Since it’s one of my favorite games, I’ve been framing a lot of my next-gen console thoughts around that one specifically. Because of that, I’m taking the copout answer and saying that this is my last year buying a new console, I’m going to be living that gaming PC life from now on (except for Nintendo. I’ll buy every Nintendo console until the day I die. I’m a sucker). But let’s see what the rest of the crew is thinking for their gaming futures…

Autoblog Producer Amr Sayour: After many years of console gaming, I’ll be sticking with my Xbox One S and gaming PC for the next generation, but I think I’ll be focusing mostly on PC gaming for the future. The quality and maneuverability on a PC is so much better than any console I’ve gotten my hands on, and let’s not forget the mods and power. A few games I’m looking forward to playing on PC are “Fast & Furious Crossroads,” and “Project CARS 3.”

Autoblog Green Editor John Beltz Snyder: I’m PS5 all the way. In fact, it’ll probably be a day one purchase for me. I’ve been a Sony follower since the PS2, and I love that a lot of my PS4 games will work in the PS5. Also, “Gran Turismo” is, in my opinion, the preeminent console racing series. Every new generation of PlayStation has blown my mind when it comes time to play GT, and I can only imagine what the PS5 — the most exciting product on the planet — will do for that experience. That said, a certain aunt and uncle plan on getting a Nintendo Switch for my son for his birthday. Please believe I’ll be playing that, too. I love playing “Mario Kart” with him on my aging Wii U.

Autoblog News Editor Joel Stocksdale: I’m definitely planning on picking up a PlayStation 5 as soon as it comes out. The main reason: “Gran Turismo 7.” The launch trailer shown during the PlayStation game presentation sold me. It looks like it will have a deep career/campaign mode like “Gran Turismo” games of yore, and I’m completely on board. Plus classic tracks such as “Trial Mountain” are back. It’s hard to overstate just how excited I am for it, even if it could be a year or two before it actually comes out. There are still going to be PlayStation 5 games coming sooner that will have me entertained in the meantime, particularly the new “Ratchet and Clank” game. I can’t wait for this new generation of games.

Ultimately, I think the lesson here, if there is one at all, is that no matter what console you choose, it’ll probably be fine. There will be fun games to play on it, it’ll be powerful, and most important of all, it’ll be fun. That said, we know the console wars will forever rage on, so let us know your plans for the next console generation in the comments down below! We talk more about this kind of stuff all the time on our twice-weekly livestreams, Tuesdays and Thursdays at 2 p.m. right here, so check that out if you’re interested as well. Happy gaming, everyone.

Autoblog may receive a share from purchases made via links on this page. Pricing and availability is subject to change.