27 Truths About Postpartum That No One Told You 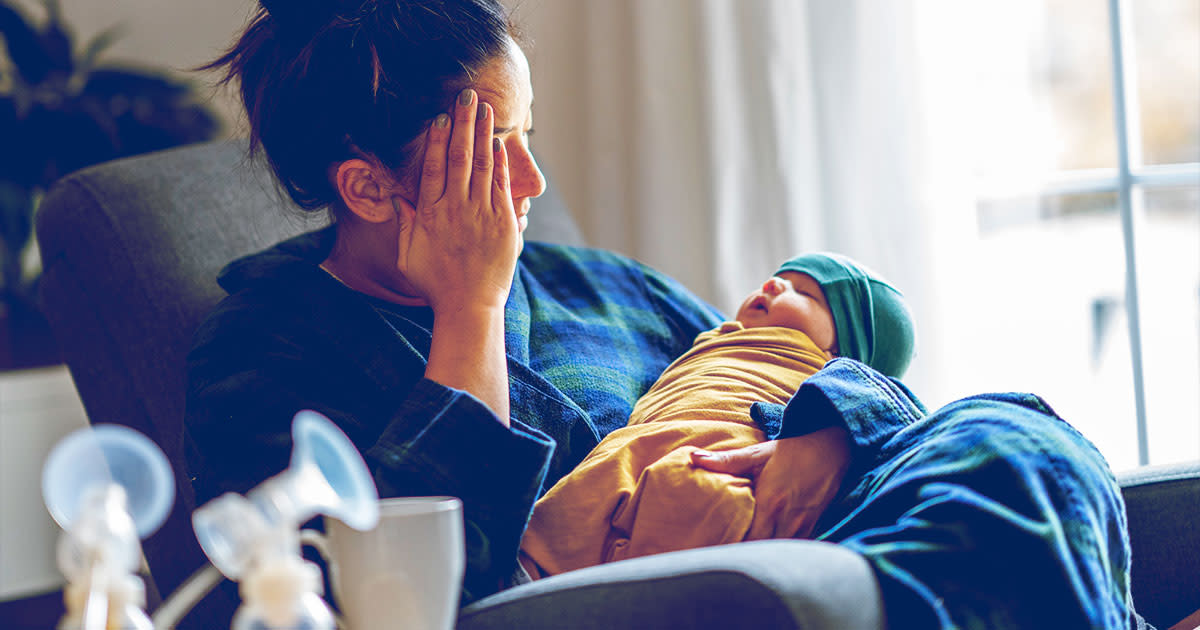 Can we talk about that emotionally fraught, magical, terrifying period of time called postpartum?

I think every person who has ever been pregnant with their first child has been a little nervous about actually getting the little cherub from the womb into the world. By the time a baby arrives, most people have some idea of what they’re about to encounter during the delivery.

But that postpartum phase– when the baby is out, but your body is still trying to recover from the absolutely bonkers thing it just did– can bring a ton of surprises. There are some things they don’t put in the books at all. Other things just don’t get the full explanation they deserve.

There’s no better way to learn what you should actually expect after you give birth than to ask people who have been there. Scary Mommy asked the question, “What’s something about postpartum that you wish someone had told you?”

Here’s what some people who have given birth had to say.

It can get kind of…well, gross. There’s no other way to put it.

“Nobody prepared me for how unlike myself I would feel. I’ve never felt as gross as I did after having a child. You’re bleeding and wearing practically a diaper. But just know, you WILL go back to normal. You will not be gross forever! You may pee a little on a trampoline, but it’s not so bad!” –Katherine D.

“Take the stool softener. That first poop is gonna be a bitch.” –Shani G.

“When you have your first bowel movement after birth, it will feel like giving birth again!! Dermoplast spray, Tucks pads, and a bag of frozen peas will be your best friend.” –Kat D.

“Hospital underwear are kind of..springy? I learned this the hard way when I sat on the toilet and those giant panties rolled up without warning and a giant blood clot went flying off my baking-sheet-sized pad and onto the floor. My husband heard me shriek and came running. I wanted to flush myself down the toilet. But blood is part of birth, and he handled it like a champ.” –Kacey C.

You’re going to hurt. There’s just no getting around at least a little bit of pain.

“Nobody bothered to tell me that I would sit on a doughnut for baby’s first week because everything would be so swollen! I expected pain, but it was like sitting on a softball!” –Emily U.

“If you tear just a little bit, you may have sutures that the doctor doesn’t tell you about or you don’t remember. DO NOT mistake it for a thread and pull it.” –Lauren Marie R.

“If you have hemorrhoids or a tear, the nurses might tell you that they will prepare a sitz bath. It will sound so soothing and relaxing. It isn’t quite as luxurious as I imagined. It’s a little basin of warm water with salt in it. It goes in the toilet and you dip your hind end in it. It stings, then feels pretty nice, but it’s mostly awkward and bloody.”—Jess T.

“Your friends and nurses might warn you that you will experience some cramping with breastfeeding. I need to warn you about this more adequately. You could be lucky and feel some mild squeezing, or you could be like me. The cramping I felt nursing my third child was more painful than 40 hours of labor with my first. And the bleeding. Oh my god. The BLEEDING. When your uterus is squeezing that hard, you’re going to bleed like mad. Always sit on one of those hospital puppy pads when you nurse for the first week or so.” –Katie C.

“Epsom salt baths are good for the healing of the body and mind. As soon as your doctor okays you and you feel up for it, get in a hot bath and relax.” Kat L.

C-section recovery can be a whole other level of WTF.

“I tried to gauge when I should take my pain medication post C-section based on how I felt, rather than as prescribed. So, I woke up from sleep on my first day home in horrendous pain, shaking and seizing up. Worst pain ever. After that I took as prescribed and set alarms to make sure I didn’t miss a dose.” –Kristen M.

“No one told me C-section recovery would be as hard as it was. I consider myself pretty tough but that was brutal. I couldn’t even stand during my daughter’s one-week checkup or make it down the hallway of our apt building without stopping multiple times. I honestly thought C-sections were easy breezy because no one talks about the awful recovery. I was taken by major surprise.” –Lauren M.

“I wish someone would have emphasized that a C-section is a major surgery, no matter how ‘routine’ it may be. And then I wish someone would have clued the rest of the world in on that bit of information too. You feel like crap when you’ve just had a cesarean. You don’t feel like entertaining. You feel like lying in bed with your new babe and resting. With any other surgery that I’ve had, people kept their distance and allowed me to recover peacefully (surgeries that were much more minor than a C-section). With my C-sections, I don’t feel like I received that same level of support/respect.” –Caila S.

“You can’t drive for a few weeks after a C-section. I had super easy recoveries and felt like myself in a week or so, but my doctor didn’t want me to drive for a month. Be prepared to work around that for those early pediatrician visits.” -Madison W.

“Postpartum anxiety is as real as postpartum depression, but less well-known. It is normal to be a little nervous and worry whether you’re getting it right. It is NOT normal to have intrusive thoughts about all the harm that could befall your baby, to be unable to sleep, or to be in a constant state of heightened awareness. It can even happen many months after your baby is born, so be aware and tell someone if you need help. It is available.”—Katie C.

“After a miscarriage at eighteen weeks, I wish I had known my body would have acted just like I had delivered a healthy baby to term. That was hard to go through emotionally when you don’t have your baby with you!” –Kristen S.

“You will never be more tired. You will never be more emotional. Keep an eye on yourself. The exhaustion can be so all-encompassing that it masks something deeper that’s going on. You should not be miserable just because you have a newborn. You deserve to be supported and happy with your new baby.” –Lia W.

When postpartum recovery overlaps with learning to breastfeed, it can be hard on top of hard.

“The only thing that actually worked to soothe my beat-up, cracking nipples was breast milk. It was better than anything I bought, and I tried multiple gels and creams.”–Kristen M.

“Mastitis can start with chills. I didn’t have pain in my breast, redness, tenderness or a fever. I only had chills. It took over twenty-four hours for the breast-related symptoms to set in. If you have chills, keep an eye out for other warning signs of mastitis.” –Kate E.

“If you think something is wrong trust your gut. [Keep pushing for more help.] My baby had a lip tie, and we knew it on day one. It took until day four to fix it and by then we were this close to needing donor milk.” –Eliza B.

“Breastfeeding can kind of ruin sex. Every time, it kills my libido and makes an orgasm almost impossible. I always worry that I will never be the same again, and then when the baby weans, everything goes back to normal.” -Katie C.

“I wish someone had told me how hard breast feeding was! If you don’t know how much work it can be, you expect it to be natural and enjoyable. My first wouldn’t latch on. Trying to breast feed him that first week was a nightmare. Not a pleasant experience. I felt I had failed. My hubby finally told me to stop and just give the baby a bottle. He reminded me that as babies we had both been bottle fed, and we were healthy and fine. For my sanity and for the baby’s calm, I started bottle feeding. I had three other bottle-fed babies after him. We bonded, and they are all healthy people to this day.” –Kristen S.

“Baby girls can be born with a period?! Who knew that shit?!” –Lisa S.

“Two words: Postpartum. Acne. It’s not just for your face. For about a month after each of my babies, I had zits on my chest, face, neck, back and ass. It was painful, and I felt ugly. It did clear up on its own, but I wish I’d known it could happen.” -Cate G.

“You’re probably going to lose hair. For a lot of women, it happens three or four months after birth. Your baby might lose their hair, too. It will come back, but you should be prepared. It can be emotional to watch your hair fall out, even if you’re expecting it, so don’t feel bad if you shed a few tears.” -Anneliese M.

“I wish I would have been bold enough to demand that my partner get off his ass and help me. He loved our babies, but I didn’t need him to snuggle the sleeping newborn. I needed him to cook and clean and take care of the other kids. I don’t know why I let him get away with using his paternity leave to relax. I guess I was just hormonal and exhausted and didn’t want to fight. But it was crap! I was the one who just shoved his child out of my vag.” –Mandy H.

In the end, all the pain and blood and difficulty is worth it.

“Right after I had my daughter, I thought, ‘Why in the world would people do this again?!’ Giving birth was the worst, most painful experience of my life! But after a while, I was like, ‘Oh, that’s why!’ Because even though it can be the most horrific physical experience for some people, it’s relatively short when you look back. And you have this amazing human to love for the rest of your life!” –Katherine D.

See the original article on ScaryMommy.com