Purchase a subscription to AFP | Subscribe to AFP podcasts on iTunes 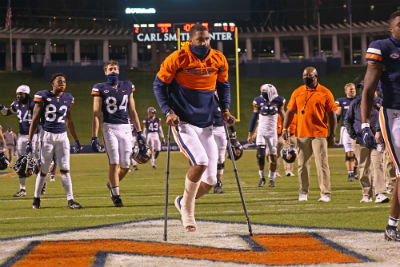 The game plan for Virginia going in: get control as early as possible, get your key guys out, get to next week healthy.

Didn’t work out entirely as planned.

Even before the ‘Hoos could get control, they lost senior outside linebacker Charles Snowden, who was on the sidelines in a cast in the second half, an apparent broken right ankle that would end his season if it is what you have to assume.

Some other key guys went down: corner Nick Grant made it back to the field, safety D’Angelo Amos finished on the sidelines with a noticeable limp.

Freshman defensive end Nusi Malani, in his first career start, left the field under his own power late in the first half, but didn’t return.

So, OK, sure, you get the big win that had been expected – Virginia was a 39.5-point favorite over Abilene Christian, a member of the Southland Conference, FCS-level.

Lining up on the other side of the QB from Noah Taylor (PFF grade: 71.0), Snowden was one-half of one of the better tandems of outside ‘backers in the Power 5.

The loss of Malani (PFF grade: 59.6) may be as big a blow, if only because of the lack of depth on the defensive line, that was exacerbated by the surprise decision of sophomore nose tackle Jowon Briggs (PFF grade: 68.4) to enter the transfer portal.

The loss of Briggs, on top of the loss, to injury, of sixth-year defensive end Richard Burney (PFF grade: 66.7) in the loss at Miami a month ago, had left Virginia with just six healthy defensive linemen.

We’ll have to await word on Malani’s status, and the status of senior safety Joey Blount (PFF grade: 72.2), who has missed the past five games, but was on the sidelines Saturday, on the headphones when the D was on the field, and the word behind the scenes is that he should be a healthy go next week at Florida State.

The rest of this reads like, OK, Mrs. Lincoln, but other than that, how was the play?

Brennan Armstrong threw for a career-high 383 yards and three TDs, including a perfect 90-yard strike to Lavel Davis Jr., who scored his fifth TD of the season, on 14 catches.

Ronnie Walker Jr. got 14 carries in mop up duty, which was good from a reps standpoint, even if it wasn’t so much in terms of productivity – he went for 36 yards on those totes.

Virginia outgained Abilene Christian 518-340. I’d suggest being concerned that the offense only gained 115 yards on the ground, and that 52 of them came from Armstrong, who shouldn’t have been running at all, and instead ran six times.

At least he didn’t get hurt.

The O line seemed intact at the end, which is good.

The skill players: all good.

Virginia is back to 4-4 on the season, its fate in its hands down the stretch.