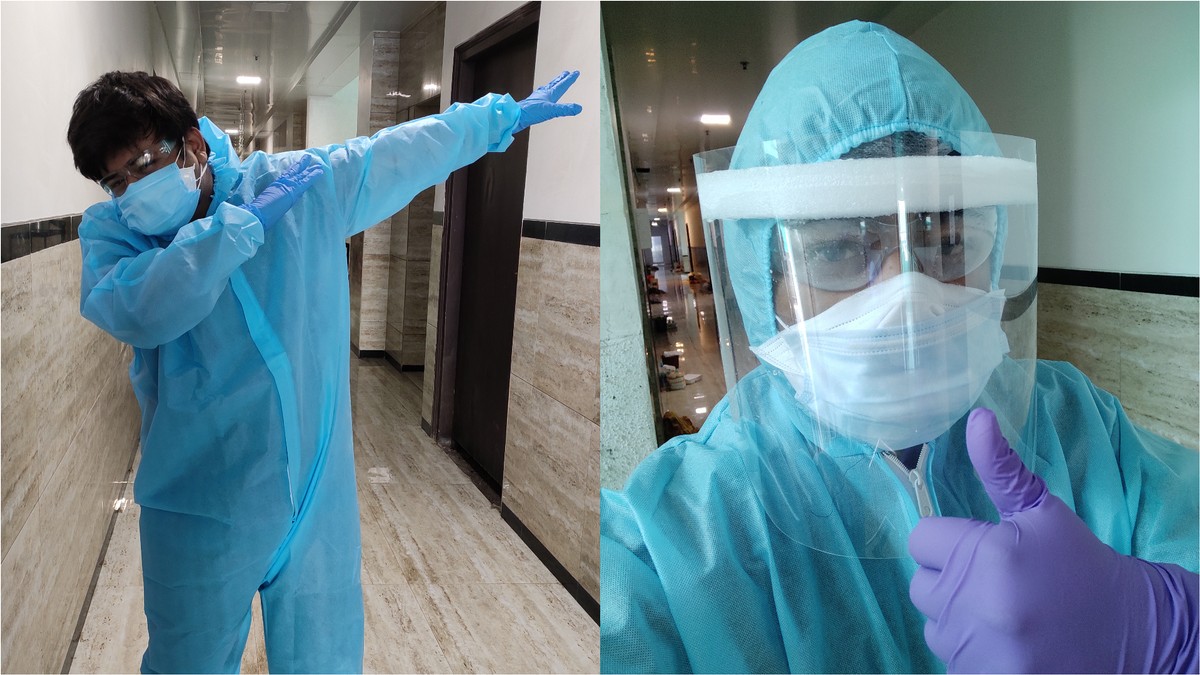 When will the construction at Infiniti Mall come to an end? Has anyone ever managed to hail a rickshaw around Indira Nagar in less than 20 minutes? Have you tried getting off a Virar slow local at Andheri station?

If these references sound alien to you, you’re probably not a resident of Mumbai’s bustling suburb, Andheri West. But if they hit close to home, these will leave you with a deep sense of déjà vu. It is what first brought residents of the area to a Facebook page that goes by the name of Andheri West Shit Posting. They came for the memes, and stayed to become a part of what one can now call a social powerhouse of sorts.

The page is not what it used to be, back when it began. Despite clocking only about 65,000 followers, the page has managed to reach audiences of all kinds, with even Bombay Municipal Corporation (BMC) officials and Bollywood directors sharing their posts. It has a voice, and isn’t afraid to take a stand with issues that are hyperlocal, national and international. It is also a refreshing change from the city’s representation being limited to images and iconography from South Bombay in internet and pop culture.

Balram Vishwakarma, 26, son of workers who migrated to Mumbai from Bihar, armed with a B.Com degree, was excited about his first media job in 2018 at a digital media entertainment company. He was full of ideas and couldn’t help but share them all. Some turned into projects, but the others remained in search of a suitable home. Vishwakarma turned them into memes and started Andherwestshitposting as a page on Facebook in March 2018. “Shit posting because I like to surround myself with irony. And imagine someone who picked up an argument with me would be spending his time arguing with a shitposting page,” he laughs.

Some of the memes went viral and by April, the page had garnered a following of about 10,000. Vishwakarma grew up in an informal housing sector (urban slum) in Andheri West and relocated to a housing society in Oshiwara in the same locality in July this year. He always felt that his part of town was underrepresented in films and on television, despite itself being home to production houses, actors, and film crew. “The population in the small stretch of Andheri West is equivalent to that of a small town and yet, Bollywood was always set in the older, more affluent South Bombay followed by Bandra (another western suburb) in the 90s. It is only in recent times that Andheri has found representation in films,” he explains.

He found the need for a page to cater to this large, diverse demographic concentrated in a small geographic part of the city. Turns out, it had more takers than Vishwakarma had set his eyes on. The memes were diverse but within two larger theme buckets: existential crisis and hyperlocal issues. “I would draw comparisons between areas in Andheri West to other countries. The Muslim majority upscale Millat Nagar was Saudi Arabia, Lokhandwala with a majority of Gujaratis was U.S.A. and Behram Baug where I live was Somalia. These got quite popular,” says Vishwakarma.

While he claims the page was a creative outlet that reflects the learnings of a 20-something over the years, co-admin Fardeen Shaikh reveals that creating a community was always the larger objective. “And to do that, we need the virality that came from memes,” he says.

The making of a social powerhouse

Shaikh and Melvin Deepak Sadankar, 21, both recent graduates, came on board as page admins a few months into its creation. Now reflecting all their interests, Andheriwestshitposting caters to a wide range of subjects including civic issues, pop culture, politics, and occasionally, film. The division of labour remains informal, while the two admit, Vishwakarma does the heavy-lifting with serious topics.

Politics came easy to Vishwakarma having attended his first rally with Maharashtra Navnirman Sena (MNS), a right-wing nationalist party founded by Raj Thackeray, when in his ninth grade. “When you live in a housing society in upscale Lokhandwala, your only concern with the municipal elections is whether the representative will build the road outside your house. But, when you live in a slum, it affects your everyday life deeply. Your access to clean water and sanitation are directly dependent on the corporator. At an early age, you become political,” he explains.

Everything else, he claims, he learnt at his workplace through politically conscious colleagues. “I went from being a capitalist, right-wing supporter who wished Narendra Modi on social media every birthday to being left liberal. I was also homophobic and sexist,” he admits. His introduction to gender and caste happened in the same way, something he admits is a learning curve visible in his work on the page. “Now, I’ve traded the toxic masculinity for G&T,” he confesses.

The Facebook page had reached 10,000 likes but wasn’t growing organically. “We saw a dip in likes and followers and a shadow ban from Facebook. Being more social media savvy than Vishwakarma, we quickly moved to Instagram and populated the page at breakneck speed,” recounts Shaikh. Here too, they expected the follower count to reach an eventual plateau. “But, the 2019 monsoons happened and we helped people navigate flooded areas in the neighbourhood, posting useful information and images,” Shaikh says. The follower count continued to rise and the page had established itself as a force to reckon with for Andheri West residents and others.

“The first time we began creating posts about serious issues was when the Aarey protest against the cutting down of trees to make way for a metro car shed, broke out. I was still certain that it was going to remain a mix of serious issues and humorous content,” Vishwakarma says. This was followed by the protests against the Citizenship Amendment Act (CAA) and the National Registry of Citizens (NRC) across the country. Vishwakarma chose to take a stand at the cost of losing followers and on occasion, death threats.

Then, the pandemic hit India and Mumbai was declared one of the earliest hotspots. Vishwakarma was planning a series of memes while also giving out information on the queues at local grocery stores and information on availability of essential supplies in the locality. “I was very casual and wanted to do some dark humour. Then things turned grave. The migrant labour crisis began and I saw my mother cry. To her, it could have easily been us,” he says.

To make matters worse, Vishwakarma and his mother both contracted COVID-19 in the first week of May. Placed in an isolation centre for four days and then shifted to Cooper Hospital due to complications, Vishwakarma was watching the pandemic unfold at close quarters now. He realised then that there was a lot of misinformation about isolation centres, hospitals, staff and the virus itself. He took to sharing his journey, bit by bit, in great detail. “I saw death and bodies, and crushing morales. I knew that wasn’t going to help anyone,” he says.

His posts now featured updates of his meals, his symptoms, the doctors who attended to him, the medication he was receiving, and even daily infection numbers from the area. It caught the interest of everyone, especially residents of Mumbai who grappled with the pandemic without such anecdotal information.

Vishwakarma shared several updates on what’s it like to be in an isolation ward, from the medicines doctors would give him to the meals he’d get. It caught the interest of everyone, especially residents of Mumbai who grappled with the pandemic without such anecdotal information.

Vishwakarma also answered queries about test centres, admission and costs for those who may have contracted the virus. To this day, a Reel dedicated to his experience with the infection serves as a storehouse of information. It provides information on what you may need to carry to an isolation centre, means to keep healthy and entertained, costs, et al. As the audience remained invested in his battle with the disease, the follower count of the page skyrocketed. “We went from 30,000 to 50,000 followers with posts reaching as many as one million people”, he recalls. “Brands began approaching me but to capitalise on it during the pandemic didn’t feel right”.

Following his brush with COVID and the warriors who nursed him back to health, Vishwakarma decided he had to find a way to give back. “In the period between March and July, I served at the same makeshift BMC isolation centre on weekends, attending 200-300 calls from patients. Doctors there had requested me to help boost their morale,” he says. He distributed colouring books to keep patients engaged, even crowdsourcing to have his own designed and printed. “I bought my own PPE kits, too,” he adds.

Despite careful examination and questions to the creators, it is difficult to establish a pattern in the posts. On a given day, they could go from gaming laptop queries to the ongoing farmers’ protest in the capital all the way to restaurant recommendations. The tone is observantly millennial as is a majority of the audience. “Basically, I am a 26-year-old guy who is curious about many subjects like others my age. The lack of a fixed pattern is intentional and perhaps what keeps us going,” says Vishwakarma, making no attempt to demystify it for us. His approach, however, is journalistic, favouring facts over fiction. He goes the extra mile to verify information through journalist friends.

He also comes around to elucidate his process, “I wake up in the morning and read the news. I look at the issues of the day and decide which ones I feel strongly about. Then, I do my research. “For instance, I read the Farm Laws during the Farmer’s Protest along with the APMC act and the Kerala model. The issue has to convince me first and I don’t want to look like a fool,” he explains throwing in a trade secret. “If I see a news item, I first think about whether I can make a meme on it. If I can’t, I post it as is. Humour is a great medium,” he says. “I also think about defending myself in a case. If I can’t do it, I won’t post it,” he adds referring to recent incidents of comedians facing lawsuits and arrests for satire in the country.

Then again, Vishwakarma knows well that meme pages are a product of these times and are not here to stay. “Eventually,” he says, “they will become redundant like AOL messenger and chat rooms of the 90s.”