The particular, horrific pain of this impeachment trial. 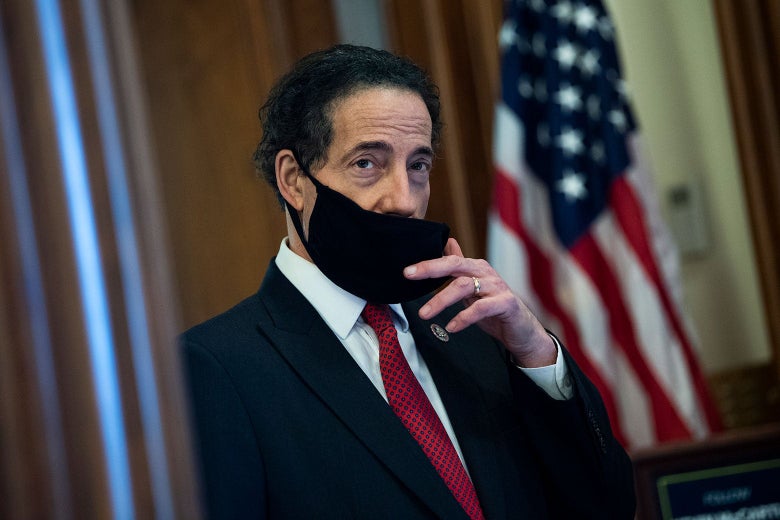 Before Wednesday’s impeachment arguments formally opened, Rep. Jamie Raskin, one of the House Democrats making the case, warned parents and teachers not to allow children to see the footage they were about to play without supervision. This was not an overstatement: It borders on the psychically unbearable to watch the tape of the Jan. 6 insurrection, with the screams of victims and the monstrous glee of a mob threatening to kill Mike Pence and House Speaker Nancy Pelosi. Pundits on TV are breaking down in tears as they talk about what they’ve seen. The entire second impeachment trial of Donald Trump is proving to be an exercise in processing mass trauma. Raskin himself is steeped in it: In his devastating opening statement Tuesday, he toggled between his family’s recent personal trauma—the loss of his son—and the trauma America has recently witnessed against its constitutional democracy. The Democrats’ case deploys brand-new video evidence of violence and terror. On Wednesday, one of those videos showed Sen. Mitt Romney that he had come much closer to danger than even he’d realized. Another underscored how close Mike Pence and his entire family had come to the mob—a mob that had been explicitly told by the president that the vice president was the enemy.

For millions of people, consuming this gruesome patchwork of images, tweets, and Facebook footage is like eating poison. The point, supposedly, is that it is necessary to do so, for the sake of memory, and possibly for the purpose of justice. But if we know the impeachment trial will end in acquittal—and even while Republicans admit that they are scared and traumatized, this still seems the inevitable outcome—the question is not just why this trial but also why should any of us relive the pain? Indeed, the knowledge of the impending acquittal serves to make the poison something even more toxic now, something we must consume and live with while knowing nothing will be done.

A daily email update of the stories you need to read right now.

The case against Donald Trump has been made. Unlike the first impeachment trial, which demanded complicated explanations of a sprawling conspiracy, the evidence presented by the impeachment managers this time is perfectly linear and comprehensible: Trump spent months claiming the election would be stolen, spent more months claiming it had been stolen, attempted to steal the election in courts, threatened election officials to change tallies, and, when all that failed, as Ted Lieu noted Wednesday, attempted to overturn the election by inviting his followers to the Capitol on Jan. 6 to stop the results from being certified. This all happened openly. Thus, a big portion of the Democrats’ case has gone to aggregating our very recent memories, discrete events that bled into others so easily that it makes it hard to realize how horribly we were all living so very recently: the hundreds of tweets, threats, campaign speeches, and interviews that set up the narrative that the election had been stolen and must be reclaimed by brute force. The incessant cry that Americans must “stop the steal” and that patriots must “fight like hell” to set those results aside.

Perhaps there is some utility in mining this recent past, even if it forces us to tamp down the healthy (and American) intuition that begs us to look ahead, to move on. This trial, as ill-fated and doomed as its conclusion may seem, is about driving a stake into the heart of the Big Lie. It is about establishing that what we all know to be true is true, that it happened as we saw it occur. As historian and fascism expert Tim Stanley explained in the days after Jan. 6, “post-truth is pre-fascism, and Trump has been our post-truth president. When we give up on truth, we concede power to those with the wealth and charisma to create spectacle in its place. Without agreement about some basic facts, citizens cannot form the civil society that would allow them to defend themselves.” And what is being painstakingly reconstructed, in this retraumatizing collage of videos and maps, timelines and narrative, is the truth. Or, as Rep. Stacey Plaskett put it, simply, beseechingly, on Wednesday, “This happened.”

This is thus less a trial than an effort at eleventh-hour GOP shock treatment. The impeachment managers are, in addition to mightily lawyering a legal case, opening a vein and bleeding out America’s suffering in an effort to move, or shame, or induce some ethical reaction in the stony face of Republican denial. They are trying to point out that it was so painful, and so personal, as to require a commensurate response.

The impeachment managers are opening a vein and bleeding out America’s suffering in an effort to move, or shame, or induce some ethical reaction in the stony face of Republican denial.

The reaction from the lawyers defending Donald Trump has largely been to blame the impeachment managers for making them relive awful versions of that which their client caused. This is the affront as laid out by David Schoen, one of Trump’s impeachment lawyers, who on Tuesday tried to analogize the horror of reliving the documentary footage of Jan. 6 to that of a prurient snuff film designed to move and titillate impressionable Americans. In his opening argument, Schoen angrily contended that a nefarious “movie company” had been enlisted to create the 13-minute opening video shown at the start of the trial. In Schoen’s telling, the film was random violence porn, maliciously edited to gin up the same vengeful, irrational emotion his colleague Bruce Castor had earlier suggested was clouding the judgment of the masses. “They want to put you through a 16-hour presentation over two days focusing on this as if it were some sort of blood sport. And to what end?” Schoen asked, adding: “For healing? For unity? For accountability? Not for any those.” (Actually, it is for the purpose of that last one, accountability, which is essential before either of the former two can be achieved.)

“Blood sport” is an interesting characterization of attempts to document truth and force accountability, but it’s also a way to imply that facts are empty theater. Schoen’s claim here is that what we all see isn’t real, but manufactured to stir up a susceptible public. The real victim of the video, in his telling, was Donald J. Trump. Schoen later told Fox News that “it’s very easy to stand up and show spliced and manufactured films.” In other words, don’t believe the video that is breaking your heart and soul, America. The film is just another Big Lie. As Schoen then told Sean Hannity, “Why do we want to trick the American people? And listen, they have great entertainment value. People are glued to a movie that’s made professionally like that,” he said. “It’s sending a very dangerous and wrong message, and it’s a hoax, I’m sorry to say.”

This is part of what is so particularly horrifying about the exercise of watching this trial: It is painful to actually watch what so recently happened—it is scary, the people in the videos are either scary or scared—and it is especially painful to watch this knowing the GOP will dismiss it as awful, yet not sufficiently important to warrant consequences. Sen. Lindsey Graham, for example, believes Nancy Pelosi to be the culprit. Donald Trump’s lawyers dismiss the events in the video as not even real.

The Republican senators don’t really want to watch what happened. Josh Hawley, who raised a fist to salute the crowd before the Jan. 6 rally to stop the steal turned to blood sport, spent the day Wednesday refusing to pay attention to the impeachment managers’ presentation, feet propped up, reading documents up in the gallery. Unlike those who are being retraumatized by the memories of Jan. 6, Hawley seems to be affronted by the idea that he is called on publicly to answer for it. A maskless Rand Paul skipped part of the proceedings on Wednesday. The less callous Republicans have reverted to the “what can we do” shrugs of the first impeachment. The principal export of today’s GOP is deflection. The bulk of the GOP is desperately trying, as they did after Christine Blasey Ford testified against Brett Kavanaugh, to say that sure, something awful happened to someone, but who among us can know for certain?

Hannah Arendt, an expert on lies and liars, argued that “under normal circumstances the liar is defeated by reality, for which there is no substitute; no matter how large the tissue of falsehood that an experienced liar has to offer, it will never be large enough, even if he enlists the help of computers, to cover the immensity of factuality.” The purpose of this painful, pointillist impeachment trial is just that—it is an attempt to lay out of the “immensity of factuality.” That factuality is excruciating. It’s made more excruciating still because the same people refusing to contend with its factuality were witnesses and victims themselves, and they still don’t care. Rep. Eric Swalwell narrating in the second person what happened to United States senators was astounding. This happened. And it happened to you. A recitation of facts that were excruciating one month ago is worse today, as new details come out of colleagues, like Romney and Pence, who were closer to harm than they even realized at the time. None of this will change their minds, a fact that starts a spiral of hopeless despair as the back of one’s mind asks: What else will we have to live through before the Republican Party finds its way back to fact-based decision-making?

Watching this trial is objectively terrible—panic-attack terrible, and deep-grief terrible. Knowing that no revealed truth, no “immensity of factuality” will change the minds of most Senate Republicans makes it seem especially gratuitous and futile to experience the pain ourselves. And yet I have no prescription for those trying to decide whether and how to relive the events of the last months in the days to come. But one reason to do so is because it happened. It happened to the senators in the room and to the law enforcement officers who saved their lives and to the journalists and staff the GOP seem willing to ignore. It happened in no small part because even after it was clear Donald Trump had initiated this and that Donald Trump wouldn’t step in to stop this, they still continued to pretend he did nothing wrong—that he had been wronged instead. That they will continue to protect this abuser, our longtime abuser and now even their abuser, is what makes this whole spectacle so deeply disturbing.

Slate is covering the stories that matter to you. Join Slate Plus to support our work. You’ll get unlimited articles and a suite of great benefits.