The 10 Best Episodes Of Crossing Jordan, Ranked (According To IMDb) 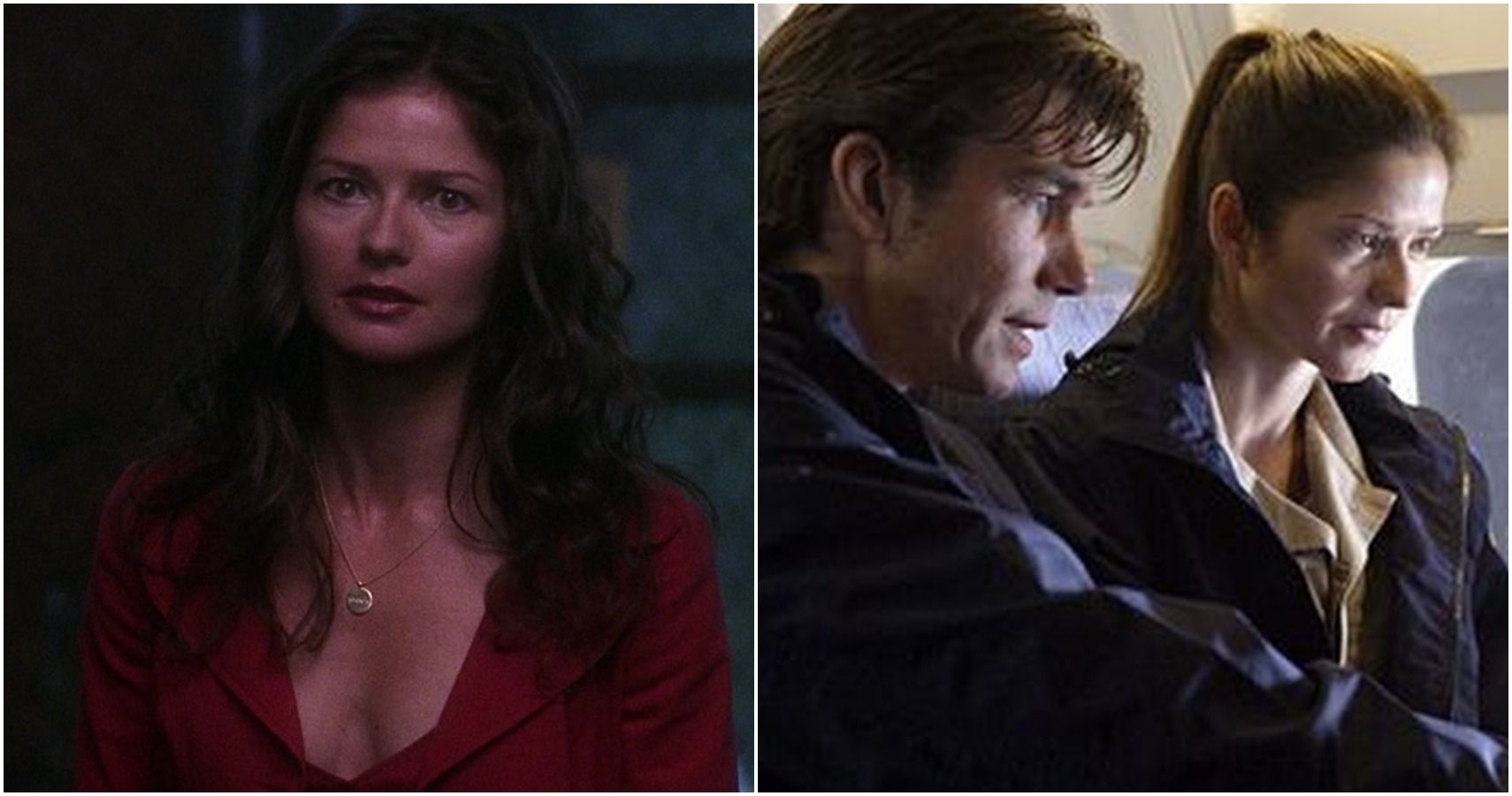 Crossing Jordan starred Jill Hennessy as the title character, medical examiner Dr. Jordan Cavanaugh, a native of Boston with a troubled childhood that has made Jordan abrasive and pushy in her adulthood. Jordan believes in truth and answers and goes beyond the call of duty to ensure justice for all.

Alongside her mentor and friends, played by familiar actors Miguel Ferrer, Kathryn Hahn, Jerry O’Connell, Steve Valentine, and Ravi Kapoor, the group always put in 110 percent on each case and were always there for one another. They considered themselves family rather than co-workers, which made for some memorable episodes.

The Season 4 finale finds cop killers on the loose. Woody takes the case personally, becoming heavily invested, and when he gets too close to one of the shooters, it nearly costs him his life. Later in the hospital, Jordan is there for him, but Woody, thinking Jordan is pitying him, angrily pushes her away.

As if that weren’t enough, Jordan is put in a tough spot when Dr. Macy is suspended, an investigation pending, and she’s put on a two-decade-old case in which Macy buried evidence. Macy’s unlikeable replacement (Henry Winkler) annoys the morgue employees to no end, gunning for Macy and his job.

The morgue is in for a surprise when one of the bodies brought in actually turns out to be alive. However, it takes them a little bit to figure it out, and the episode provides an interesting perspective from the victim himself, a brutal lawyer that has crossed paths with the medical examiners and the police before, and was even once a friend of Garret’s.

The victim silently and frequently pleads for someone, anyone, to notice that he is living, and he even vows to turn over a new leaf should he survive. Luckily, before he undergoes an autopsy, Garret realizes the lawyer is far from dead and sends the paralyzed man to the hospital. However, it doesn’t buy the lawyer much time, as he’s hit by oncoming traffic after discharging himself in one fell swoop of ruthless karma.

Everyone is shocked when a gunman opens fire, killing a woman in the morgue. Lily, who was present, is traumatized by the incident. Yet, as everyone investigates, the woman turns out to be far from innocent, and investigating her murder leads to the awful truth of what she and her brother were up to.

An angry father turns out to be the gunman, and previously thinking his daughter was dead, he instead gets a happy reunion with her before he’s to be taken to jail for his crimes.

Jordan faces the consequences of hers and Woody’s night together, and her boyfriend, J.D., ends up punching Woody at a crime scene. Yet, the three end up having to band together to investigate a corporate cover-up in faulty armor the military was using.

Elsewhere, Nigel investigates an old kidnapping, leading to the reunion of the kidnapped boy, now a man, with his parents. Garret deals with some family drama when he finds out his daughter may be taking drugs with her new “bad boy” boyfriend, and his fears are confirmed when the two take off with his stereo.

Garret gets more than he bargained for when he arrives at the house of a man (played by Jeff Perry), who turns out to be holding a young boy captive. Garret himself is captured and forced into the man’s basement. Garret struggles to figure out the man’s motives, as well as get the young boy to remember who his parents were and that his captor is far from good, given the poor boy has been brainwashed over the years.

Garret and the boy later manage to escape, where the boy and his parents are finally reunited. Meanwhile, Jordan and Lu disagree regarding the innocence of the morgue janitor in their latest case, with Jordan coming to the sad conclusion that he was guilty the entire time.

Killing gets personal when a serial killer targets Nigel and taunts him, communicating with him through his blog online. Nigel is skeptical initially, but when he’s sent to a crime scene featuring three hanged bodies alongside law enforcement, Nigel realizes “The Hangman” is who he says he is, and that he’s highly dangerous.

RELATED: The 10 Best Episodes Of Yellowstone, According To IMDb

Nigel’s mission quickly turns personal, as he takes it upon himself to stop the killer and save lives before it’s too late. Meanwhile, while auditing old autopsies, Jordan finds that Bug may have made a mistake on a past case that led to the arrest of what could be an innocent man.

The series finale found the characters stranded following a plane crash. High in the mountains, Jordan and the others do what they can to survive, and continue their investigation of the bodies on board, as they’re looking into a “ghost ship” case in which everyone on board was killed, but the cause of death is unknown.

The team uncovers a terrorist attack, which makes their rescue that much more urgent to warn the people of Boston. Meanwhile, Dr. Macy is critically injured and requires medical attention, and Jordan finally tells Woody that she loves him.

Following Jordan’s major surgery, she’s at home recovering, but she’s hovered over by her friends, who stick around to ensure Jordan is healthy and taking her meds. Jordan insists it’s not necessary, but still, she finds the likes of Garret, Woody, and even Kate in her apartment.

When Bug goes missing, Woody, Garret, and Nigel are torn between looking for him and caring for Jordan, eventually leading Garret to get Kate to care for Jordan in their absence. Kate, the newest medical examiner, and not exactly a team player at that, reluctantly heads to Jordan’s. The two actually end up bonding, with Kate even helping Jordan through her hallucinations, which turn out to be a side effect of one of Jordan’s medications.

Jordan covers a night shift that turns out to be one of the busiest and saddest nights she’s certainly ever had. A plane crash occurs, and as the team investigates, they come to a devastating conclusion that someone close to them was on the flight.

RELATED: 10 Best Episodes Of Batman: The Brave And The Bold (According To IMDb)

In the meantime, Woody teams up with the FBI to track down a missing boy, whose father was one of the plane crash victims. The Season 4 episode was certainly packed with heartache.

In the Season 5 opener, Woody and Jordan are still struggling, with Woody insisting that Jordan leave his hospital room. When things look like they may mend between the two, Jordan is forced to call in for back-up to stop Woody from taking on and possibly killing, a cop killer alone.

Jordan is further strained by the new operations of the morgue, courtesy of Garret’s replacement, Dr. Slokum, who is far from anyone’s favorite. Plus, with an old but familiar killer on the loose, the morgue staff strongly feels they need Garret’s assistance.

NEXT: Parks And Recreation: 10 Best Season 2 Episodes, Ranked According To IMDb

A Seattle native, Kacie has loved entertainment in the forms of books, films, television and music since day one. Inspired by a filmmaker relative, Kacie has been pursuing a career in the film and television industry in Los Angeles ever since. A graduate of The University of Arizona, Kacie has written for her college newspaper The Daily Wildcat, Harness Magazine, and now has added Screen Rant to her resume. She loves writing and all things pop culture.