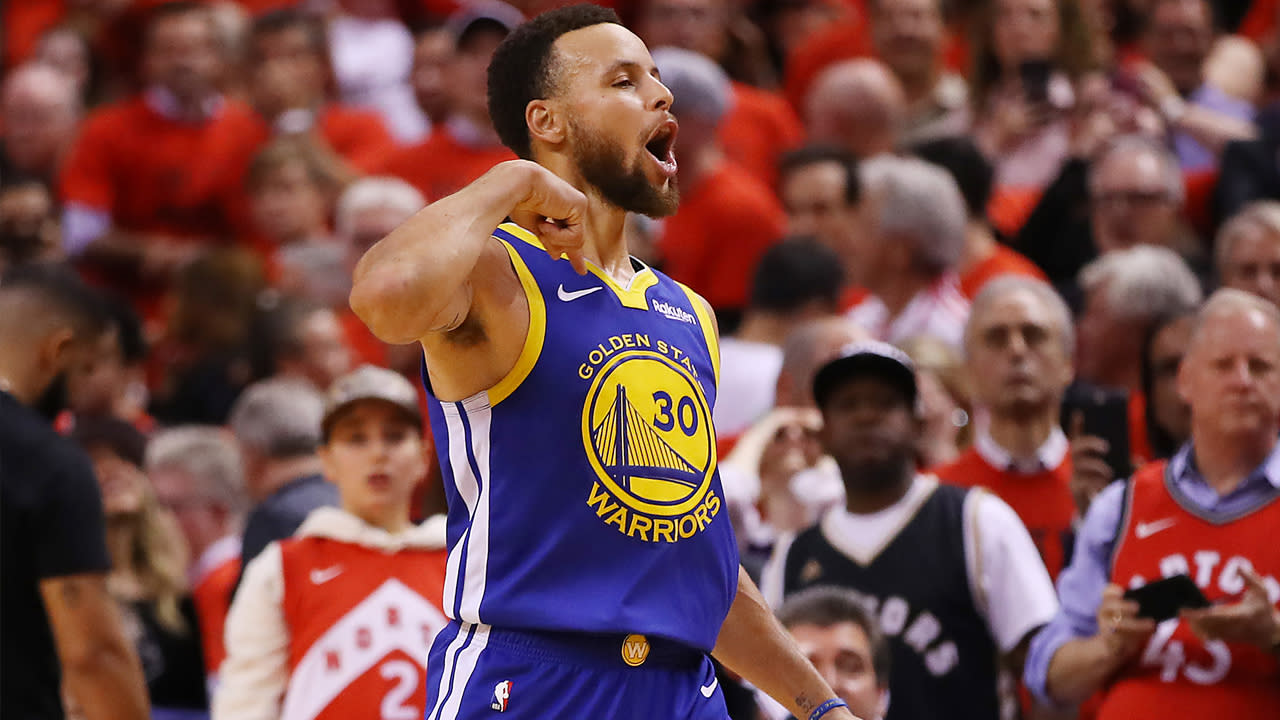 It feels like we were just here doesn’t it?

Fourteen months ago, every NBA opinion-haver with a microphone was declaring that with Kevin Durant in Brooklyn and Klay Thompson out for the season, Steph Curry could finally prove that he’s worthy of his superstar status. (Nevermind the fact that he’s a two-time MVP and the best shooter in history. We can’t let facts get in the way of a juicy false narrative, right?)

Well, fast-forward to Friday and we are right back where we started. After Thompson suffered a torn right Achilles tendon that likely will keep him out for the entire season, the wretched toxic slugs that populate the debate show airwaves were at it again. Our favorite cretin, FOX Sports’ Skip Bayless, went on TV Friday and ripped off a wild argument that Curry’s two MVP trophies come with asterisks because he played with Thompson, Draymond Green and Andrew Bogut.

Alright, so let’s completely disregard everything that came out of his mouth. That’s a good life rule to live by. We know that every star player who has won multiple championships has done so surrounded by talent. Basketball is, after all, a team sport.

While the argument about Curry’s past accomplishments is absurd and is meant to be beamed into the heads of mindless hosts without eyes, Curry does have an opportunity this season. A real one, not the faux one he supposedly had last season before he broke his hand.

One look at the 2019-20 Warriors and it was clear that even Curry, with all of his gifts, would be unable to lift them to the heights many wanted in order to validate his status as an all-time great. Apart from Green and D’Angelo Russell, the Warriors were mainly a collection of young players getting their first taste of NBA action and reclamation projects looking to stick in the league. It was a roster that, even with a healthy Curry, was going to struggle to win games. His usage rate would have shot through the roof and the stats might have looked OK, but the end product would have had his critics using a losing season during a gap year as a knock against him.

But now, Curry has a chance to truly silence his doubters.

To be clear, Curry has nothing to prove to anyone. His accolades speak for themselves and his place in the pantheon of all-time NBA greats has long been reserved.

But this season can be a true reminder of his greatness. A sledgehammer to the strawman arguments against his place in the halls of NBA immortality.

How quickly people have forgotten his 2014-15 season that sparked a dynastic run that won’t soon be duplicated. They disregard a 50-40-90 season that made him become the only unanimous MVP in league history. They brush off his sacrifice to bring Durant on board and cede the spotlight to him in order to win more titles. It’s a move that would have been praised from all corners had any other athlete shown they wanted to win more than they wanted to be the only guy.

The 2016 NBA Finals collapse will always be there. It’s a blemish on his elite resume. Of that, there is no doubt.

But the talk of him disappearing in the NBA Finals is an argument that had less support than the spineless ghouls pushing the anti-Curry narrative.

In his NBA Finals career, he is averaging 26,5 points and 6.2 assists on 42.0 percent shooting from the field and 38.5 percent from downtown. His greatness forced the Toronto Raptors to run a Box-and-freaking-1 in an NBA Finals game.

With Durant out last postseason, Curry put on a second-half show in Houston to send James Harden and Chris Paul packing. It was, in my opinion, his signature playoff moment.

It’s been 17 months since Curry was under the bright lights and truly a factor in the NBA title discussion. Since then, he’s been more of a nebulous idea. A specter of death floating around the NBA as a reminder of the unstoppable force that used to rip the life out of the rest of the league on a nightly basis.

Thompson is gone for another season, yes. But the Warriors aren’t tanking. Owner Joe Lacob is making sure Curry is surrounded by as much talent as possible entering his Age 32 season, giving him the proper support to reestablish his place among the current greats.

The Warriors’ reintroduction to the NBA will have to wait for another season. But Curry’s will come this year.

And it will bring a reckoning for all those who believe his success to be the product of a system and elite talent around him.

Curry has heard all the whispers and doubts. He’s read the premature obituaries about his and the Warriors’ run.

All that will be in his mind as he reemerges into the NBA spotlight. Ready to put an exclamation point on his greatness and remind everyone why he was the face of the NBA for the last half-decade. One that shouldn’t be mocked, doubted or forgotten.