Rob Gronkowski Age & Height: How Old & How Tall Is He? 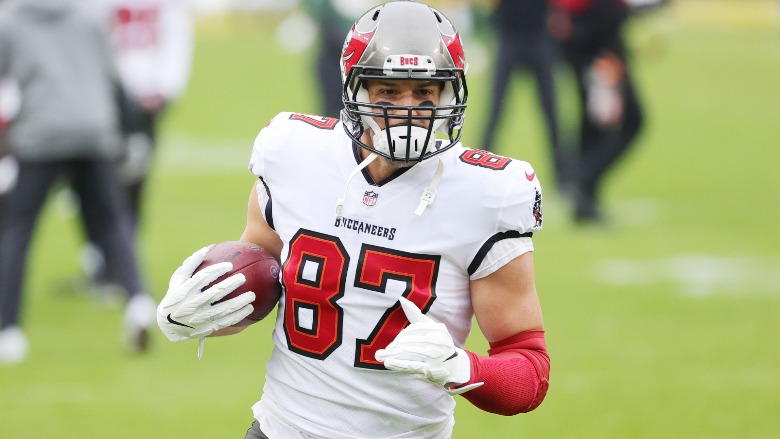 Rob Gronkowski is a 31-year-old tight end for the Tampa Bay Buccaneers. Gronkowski will celebrate his 32nd birthday on May 14. He played college football at the University of Arizona, and was drafted in the second round with the 42nd overall pick in the 2010 NFL Draft by the New England Patriots at the age of 21.

Gronk stands at 6-foot-6-inches tall and he weighs approximately 265 pounds. In 2019, after he announced his retirement from the NFL, Gronkowski lost about 20 pounds by focusing on healthy foods, and cutting out fried food and other junk food items that became staples when he was playing football.

“I’m trying to get that crap weight out of me. I’ve never been more ripped in my life,” he said in an interview, according to the Wall Street Journal. Gronk revealed that he also switched up his exercise routine, focusing on weight lifting with lighter weight and band workouts.

Rob Gronkowski Retired From the NFL at the Age of 30, but Came out of Retirement to Play With Tom Brady in Tampa

Gronkowski retired from the NFL in 2019. He made the announcement on Instagram, just six weeks after his third Super Bowl victory with the Patriots.

“It all started at 20 years old on stage at the NFL draft when my dream came true, and now here I am about to turn 30 in a few months with a decision I feel is the biggest of my life so far. I will be retiring from the game of football today,” his announcement began. At the time, Gronk was 30-years-old.

Not long after Tom Brady inked a deal to join the Buccaneers for the 2020 season, Gronk came out of retirement to join one of his best friends in the game.

“I was getting questions all the time. I was getting opportunities throughout [my] whole retirement to come back, which is special. I’m definitely blessed to have had those opportunities big time, but I said it from the beginning that I wouldn’t come back unless I was feeling it; unless I’m feeling good, feeling healthy and I’m feeling like I’m ready to go. Now this is the case. This is the time,” Gronk said during a Zoom interview with his new team.

Fast forward 10 months and Gronk is ready to make history. His team will be the first to play in the Super Bowl at home.

Gronkowski is pretty tall, standing at 6-foot-6-inches, but he isn’t the tallest tight end in the NFL.

Darren Fells, who plays for the Houston Texans, is 6-foot-7-inches, as is Demetrius Harris who plays for the Chicago Bears. Gronk has quite a few fellow tight ends that are the same height as he is, including Kyle Rudolph of the Minnesota Vikings, and Marcedes Lewis of the Green Bay Packers.

As far as how Gronk sizes up compared to the tight ends on his team, Cameron Brate is one inch shorter, while O.J. Howard and Antony Auclair are the same height.

The tallest tight end to ever play in the NFL is Morris Stroud. He was 6-foot-10-inches, and played for the Kansas City Chiefs.