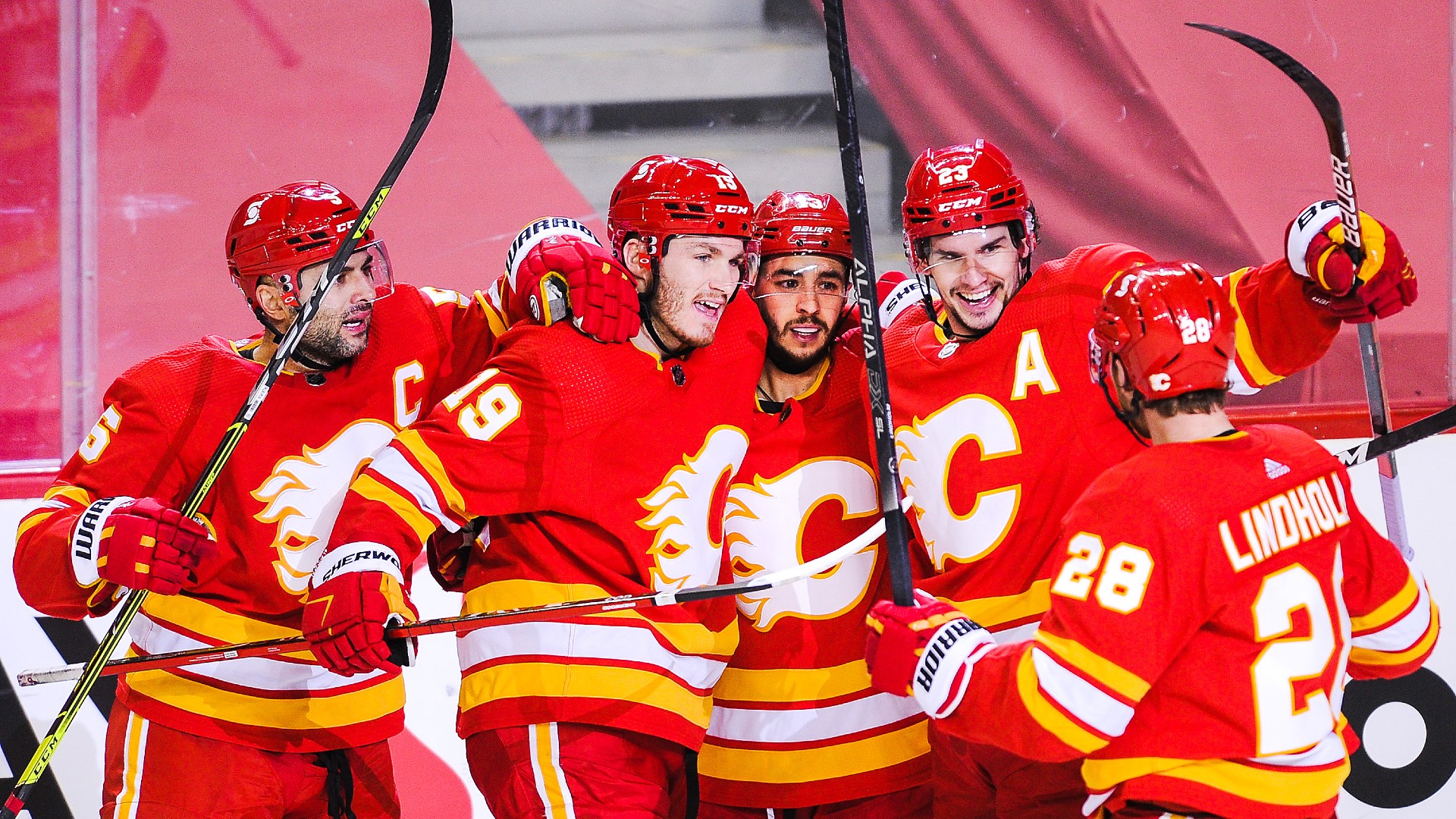 It had been 371 days since the Oilers and Flames last battled it out in an official NHL game (they did play an exhibition in the summer bubble), but despite being more than a year removed, there was no love lost between these two clubs.

What did his fellow antagonist from the Flames, Matthew Tkachuk, think before puck drop? “I think the hatred is definitely there.”

Saturday night marked the first of 10 Battle(s) of Alberta this season, and while this one may not have had the same fireworks as last year’s four-game set (there was no goalie fight in this one or any dropped gloves, for that matter), it did have some drama as the Flames skated away with a comeback 6-4 win over their Albertan rivals.

“We talked a little bit about having more swagger when we’re down,” said the Flames’ Mikael Backlund. “We don’t want to get down in games but we have lately, and we have to get that swagger back that we know we’re going to come back and we know we’re a good team and it doesn’t matter how games go. I thought that was a big thing for us in the second there, coming out with a lot more energy, a lot more confident swagger to our game.

“I thought that was a big step forward for us, for sure.”

NHL POWER RANKINGS: In cinematic week, Flames are ‘Beauty and the Beast,’ Oilers are ‘Almost Famous’

The teams swapped disappointing periods: Edmonton outshot (17-3) and outscored Calgary (2-1) in the first; in the middle period, it was the Flames’ turn, outshooting (16-5) and outscoring (2-0) the Oilers. Things were more even in the final stanza as the teams traded nine shots each but the Flames did pot one extra goal (3-2).

Elias Lindholm opened the scoring on the Flames’ first shot before the Oilers scored two — including No. 9 on the season for Connor McDavid. In the second, Calgary tallied two in less than two minutes — the first by ex-Oiler Milan Lucic and the second by Backlund.

“I don’t like the way we played the start of the second period because we got away from some of the things that we were doing well,” said Oilers head coach Dave Tippett. “It doesn’t matter who you’re playing against, if you don’t play well you’re going to be chasing it and that’s exactly what we did.”

A rejuvenated Jesse Puljujarvi had himself a start to the third. First, he evened things 78 seconds in, but then he took a penalty that Dillon Dube capitalized on to give the Flames the lead back. The teams swapped goals before Sam Bennett — yes, he of trade rumors and healthy scratches — scored the insurance goal.

“I think that’s a huge win for our team,” said Bennett, who snapped an 18-game regular-season scoring drought. “We’ve definitely had ups and downs this year, so to get a solid performance from pretty much our whole team, it’s great for everyone and builds confidence moving forward.”

This year’s opening round of the Battle of Alberta had a different feel to it as the Saddledome was empty except for some scribes watching from above.

“It sucks not having fans, especially for these games,” Tkachuk said pregame, expressing a sentiment that’s repeated across the league. “The buzz around the city and the rink will be electric right now.”

But while there were some hellos and how-do-you-do’s exchanged after whistles, there was a bigger agenda: an all-important two points. Calgary snapped a two-game losing streak and moved a point behind the Oilers for the fourth (and what would be the final) playoff spot in the North Division.

“You get six goals scored on you, there’s a few things you need to clean up,” said defenseman Darnell Nurse, who scored the third-period marker for Edmonton. “We know we need to be better in our own zone, support each other in the middle of the ice. Once we take care of that we know we have enough offense.”

The Flames were without Derek Ryan, who suffered a fractured finger in the team’s 4-1 loss to the Jets on Thursday. Edmonton was once again without defenseman Ethan Bear, who hadn’t played since Jan. 30 after being hit by a puck while sitting on the bench. He was placed on injured reserve Saturday, retroactive to Jan. 31.

Sporting News had all the action as the Flames snagged the first Battle of Alberta of the season.

12:42 a.m. — Thirty seconds left and McDavid and Draisaitl have been on the ice for more than five minutes.

12:41 a.m. — After a long stretch of Oilers action where the Flames were pinned in, the Flames finally clear.

12:40 a.m. — Two minutes left and the Oilers have been controlling play and keeping the Flames pinned.

12:21 a.m. — GOAL. Skating 4-on-4, Oilers once again showcase a strong transition game. After the Flames get a chance, Edmonton heads up ice and the Flames lose track of Darnell Nurse, who scores alone in the slot. Flames lead 5-4.

Check out the reaction from Dube.

12:08 a.m. — Well, after tying things up, the Swede takes a two-minute minor. Flames head to the power play for the second time; the first one was a scoreless venture for just under a minute in the second.

12:06 a.m. — GOAL.  Sam Bennett with a good backhander but the Oilers turn it the other way and McDavid’s lead pass springs Jesse Puljujarvi between the Flames’ defense and he buries it. Game tied 3-3.

11:43 p.m. — Dillon Dube rips a shot, and after the whistle there are more pleasantries, especially between Tkachuk and Lagesson. Things are starting to get feisty.

Check out the reax

11:29 p.m. — They would not score. but Tkachuk got two good looks, including a one-timer from the right circle.

11:26 p.m. — Connor McDavid comes flying in — because, of course — and gets around Mark Giordano but takes out Markstrom as he falls (from Chris Tanev’s stick). McDavid gets called for interference.

11:25 p.m. — Joakim Nordstrom is called for another minor and the Oilers head to the power play. Edmonton is 1 for 3 for the game.

11:22 p.m. —  Elias Lindholm breaks in and dekes but can’t bury it. The puck is loose but the whistle blows as the referee loses sight. Matthew Tkachuk shoots the puck after the whistle and Darnell Nurse has something to say about that.

11:21 p.m. — Sam Bennett is in some pain on the bench after taking a shot off the foot but tells the trainer he’s OK.

11:14 p.m. — GOAL. Flames get a 2-on-1 and while Koskinen gets the first stop, Mikael Backlund follows his shot and bangs in the loose puck. Flames lead 3-2.

11:10 p.m. — GOAL. Flames are looking a tad bit better to start the second and Milan Lucic ties it up as he gets the puck in front and beats Koskinen. Game tied 2-2.

After #Flames scored, Edmonton registered 16 of the next 18 shots in the game.

10:45 p.m. — PP GOAL. The Flames forget about Connor McDavid, who takes the dot-to-dot pass from Ryan Nugent-Hopkins and beats Markstrom. Nothing the netminder — who has been very good in this one — could do there. Oilers lead 2-1.

10:44 p.m. — Oilers now 0 for 2 but get another power play as Joakim Nordstrom clips Mikko Koskinen while cutting through the crease.

10:38 p.m. — Flames captain Mark Giordano sends one over the glass. The Oilers’ potent power play gets another chance. Edmonton is 0 for 1 so far.

10:35 p.m. — Another strong save by Markstrom as the Oilers’ point shot gets deflected and he has to stretch to make the stop.

10:32 p.m. — Solid stop by Jacob Markstrom as Connor McDavid drops the puck on a cross with Ryan Nugent-Hopkins, who gets off a good shot.

10:27 p..m. — Sportsnet shows a replay of McDavid taking an awkward hit along the boards, getting up slowly and checking that left knee. He’s back out there but that’s something to monitor.

10:26 p.m. —  The Oilers put their lines in a blender for this one and are getting some chances — the last one from Kyle Turris.

10:15 p.m. — Matthew Tkachuk is called for roughing. Oilers — eighth in the NHL — get the first power play of the night.

10:11 p.m. — GOAL. Hard to gauge if Dillon Dube dropped the puck or just lost control, but either way, Elias Lindholm picked it up and scored from the top of the right circle just 56 seconds into the game. Flames lead 1-0.

10:10 p.m. — Puck has been dropped. The first Battle of Alberta is a go and on the first shift — off the faceoff — Sam Bennett chugs into the offensive zone and throws a big check behind the Oilers net.

9:45 p.m. — Sam Bennett was a healthy scratch (coach’s decision) for the Flames’ game Thursday. He’s in for this one.

#LetsGoOilers McDavid & Draisaitl have a combined 46 points this season.

Heading into tonight’s action, that’s 4 points fewer than the entire Islanders roster has through 9 games (50)

#Flames Roster Update: Zac Rinaldo and Connor Mackey have been activated to the roster from the taxi squad. In addition, Derek Ryan has been played on the Long-Term Injured Reserve.