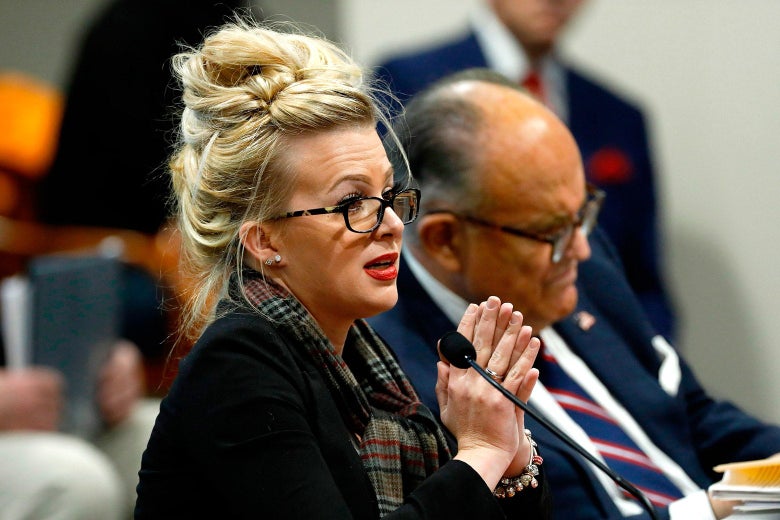 It’s no surprise that Melissa Carone, Rudy Giuliani’s star witness at a Michigan election fraud hearing, went viral. She looked the vaguely Palinesque part updated for 2020, complete with glasses and an unstable but compelling updo, and she commanded the stage. Occasionally slurring but never unsure, she yanked the spotlight away from the politicians presiding over the hearing. She repeatedly interrupted Republican Rep. Steven Johnson—who struggled valiantly to elicit coherent testimony from her concerning some kind of voter fraud—to imply, between emphatic finger wags and affirmations of her credibility, that he himself must be guilty of some unspecified impropriety. “What did you guys do, take it and do something crazy to it?” she said, lifting her eyebrows, of a poll book that a hapless Johnson insisted did not have the irregularities she claimed. Even Rudy Giuliani, no stranger to embarrassing public spectacles, tried and failed to shush her. A major character had sprung fully formed onto the national stage and Twitter roared to life with casting ideas for the inevitable Saturday Night Live sketch—proving, among other things, that we still think it’s possible to satirize this moment.

A daily email update of the stories you need to read right now.

It’s not. Carone is the slurring but concentrated version of a particular kind of American “authenticity” whose very mockability is its potency: a type as confident as it is ignorant, so righteous and blustery and simultaneously sincere and unhampered by facts or deference that it makes terrific TV. Announcing that she could go to jail for lying and had been forced to get rid of her social media because of harassment by Democrats, the IT contractor was on social media tweeting less than a day later. She’d lied about lying, but that was sort of beside the point: Carone is a crank, and no one expects cranks to be consistent. And she wasn’t alone. A Twitter account live-tweeting that Michigan hearing—and I recommend reading the thread in full—documented a parade of cranks with drily descriptive captions that read like Mark Twain. According to the thread-writer, a poll watcher in Michigan testified “that black lives matter people wore rhinestones. This was a problem for her.” Another man testified that the room where votes were being counted was too warm. Another, per the account, “loves FREEDOM. He was at the stop the steal rally. He wasn’t a poll watcher. He is saying Obamas reign of destruction was caused by dominion voting machines. His testimony is about signs he saw at a rally.”

It says something about the narrowing possibilities for satire that many of my colleagues discussing the thread thought it was itself a satirical but inaccurate summary layering unbelievable caricatures upon otherwise boring and rote testimonies. The claims seemed too outlandish. Not everyone agreed: One colleague who’d read hours of voter fraud hearing transcripts said they sounded perfectly plausible to him. He was basically right: A video of clips was eventually uploaded that mostly corroborated the descriptions.

The video is worth watching. There the cranks were, testifying one after another, clearly thrilled to be playing important roles, to matter, as they addressed lawmakers. Most weren’t quite as theatrical as Carone, and I felt, as I often do, a surge of anxious fellow feeling for normal citizens when they address politicians in public hearings. Few of us know how to correctly classify our experiences in every context, after all. It may not be obvious to a consumer of far-right sources that not being allowed in to watch the count themselves (this was one complaint) isn’t the same thing as election fraud. It’s a strange collision of protocols and expectations, and hearings can be moving demonstrations of democracy when they elevate people’s concerns, however meandering or unpracticed or silly the presentation, into a matter for government to document.

Usually, that imbalance favors the politicians, who have power and titles and knowledge of arcane bureaucratic details they can bring to bear against a witness’s inexperience. That seems to have shifted in these voter fraud hearings. The attention, the locus of power and energy, now favors the cranks. It’s kind of an understatement to say that—despite four years of a Crank-in-Chief—we have not adapted to this change. We still can’t accept that loud theatrical bluster overshadows the formality of government. We still think, looking at a Twitter thread documenting how a man “swore himself in” to discuss his radio show and eventually broke down in tears, This can’t be real. While jokes about who would play Melissa Carone proliferated, I kept having flashbacks to 2016. Look: Laughing at cranks is as time-honored as the cranks themselves. It’s fun! Cranks are funny. But surely, given all that’s happened these last four years, our understanding of the intersection between mockery and power has changed? Surely we appreciate, now, that laughing at a crank inflates his or her currency? Catapults them into relevance? Transforms them from targets into lightning rods?

Cranks matter now. They are being given seats at the table, not just as witnesses but as officials. The president is a crank. So is his team, which is trying to overthrow the results of the election. Sidney Powell is a crank. Rudy Giuliani is a crank. QAnon cranks have been elected to Congress. If Donald Trump has proven anything, it’s that a massive number of Americans don’t have a “bridge too far” when it comes to crankish excesses we still somehow think the public will find disqualifying. If anything, the opposite is true: Cranks who proudly own their eccentricities and brandish them have learned that much of the American public will perceive their success despite their crankishness as proof of their power. Never mind Trump’s ignorance, his conspiracy-mongering, or his con jobs. Trump’s hair, like his makeup, is a loud external expression of nonconformity that his followers respond to precisely because it’s ridiculous. That it will court mockery is obvious, but indifference to mockery is power. The more they’re mocked, the more followers double down into hurricanes of tribalism that become a sincere and unshakeable loyalty. It’s why they claim him as theirs rather than relegate him to just another Manhattan millionaire. The memes of Trump’s head pasted on muscular bodies are expressive of the way satire collapsed into sincerity—they are ridiculous but also completely serious: Trump supporters know he is an old man who prefers riding in golf carts to walking, but celebrate him as the healthy and powerful epitome of American masculinity.

The fact is we’re in a crank pandemic and there’s no vaccine. Judging by the overnight sensation she’s become, Carone’s is a form of brashness Americans still don’t have much resistance toward. Trumpian in an extremely obvious and enthusiastic way, either by coincidence or design, she’s causing a response that echoes the way so many responded to Trump before he won the highest office in the land: laughing him off and looking forward to SNL.

Readers like you make our work possible. Help us continue to provide the reporting, commentary, and criticism you won’t find anywhere else.