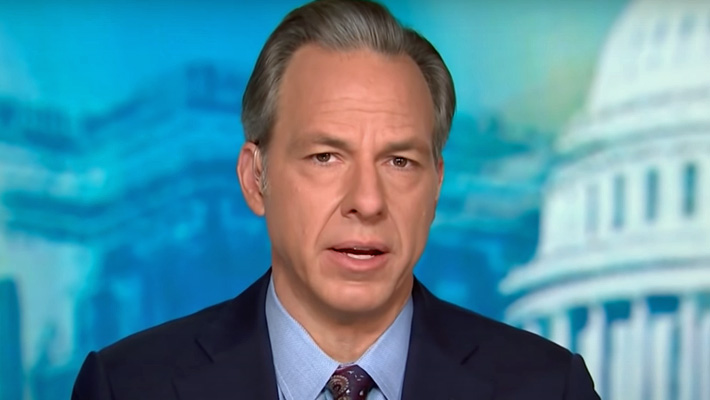 Jake Tapper has officially reached the “Why-Should-I-Even-Listen-To-This-Nonsense” phase of his coverage of a handful of Republican lawmakers.

The CNN anchor paid a visit to the network’s morning program, and talk quickly turned to the GOP’s disinformation tactics. In case you missed it, key members of the Republican party, including House Minority Leader Kevin McCarthy, have been disparaging House Republican Conference Chairwoman Liz Cheney after she refused to back down from comments criticizing former President Donald Trump and his campaign to sow doubt in the outcome of the 2020 Presidential Election. Tapper took issue with McCarthy and other members of the party wanting to oust their most senior female member in leadership for, as he put it, reminding voters of basic facts.

“Her continued presence is a reminder of the fact that he [McCarthy] is exemplifying cowardice and lies,” Tapper said. The anchor went on to call out Minority Whip Steve Scalise and others who helped promote the “Big Lie” that the election was ultimately stolen from Trump, a falsehood that led to the Jan. 6th insurrection on Capitol Hill.

When it comes to lies like this, they’re like Doritos,” Tapper said (via Mediaite). “You can’t just do one. You keep lying, and lying, and lying. We saw last week, McCarthy spreading the lie about Joe Biden wanting to steal your hamburgers for climate change. We’ve seen the appeasement of lies when it comes to Covid and the fact that about half of Republican voters say that they’re not willing to get vaccinated because of all the lies and fear that has been injected into the Republican bloodstream about health issues. We see the appeasement of the conspiracy theorists that support the deranged theory of QAnon — that there are satanic, cannibalistic pedophiles who run Hollywood and the Democratic party. It just keeps going. That’s the point.”

Which, fair point. The Republican party has sacrificed so much integrity to back Trump that it’s almost impossible to discern who even has the ability to tell the truth anymore. Like a snowball that keeps rolling down a hill, the lies keep growing — from QAnon to stolen elections to climate change deniers, etc. That’s the thought process that led Tapper to his next on-air rant, one in which he questioned if giving any of these Trump lackeys is really worth it anymore?

“I happen to believe that this country needs a strong, thriving, healthy, fact-based Republican party,” Tapper said. “We need those debates happening. But we can’t have those debates if one side of the argument is not willing to stick to standards and facts. How am I supposed to believe anything they say? If they’re willing to lie about Joe Biden wanting to steal your hamburgers, and QAnon and the Big Lie about the election, what are they not willing to lie about? Why should I put any of them on TV?”

We’ll just leave with this: anyone who’s willing to cut down on Ted Cruz’s airtime is doing the public a favor.