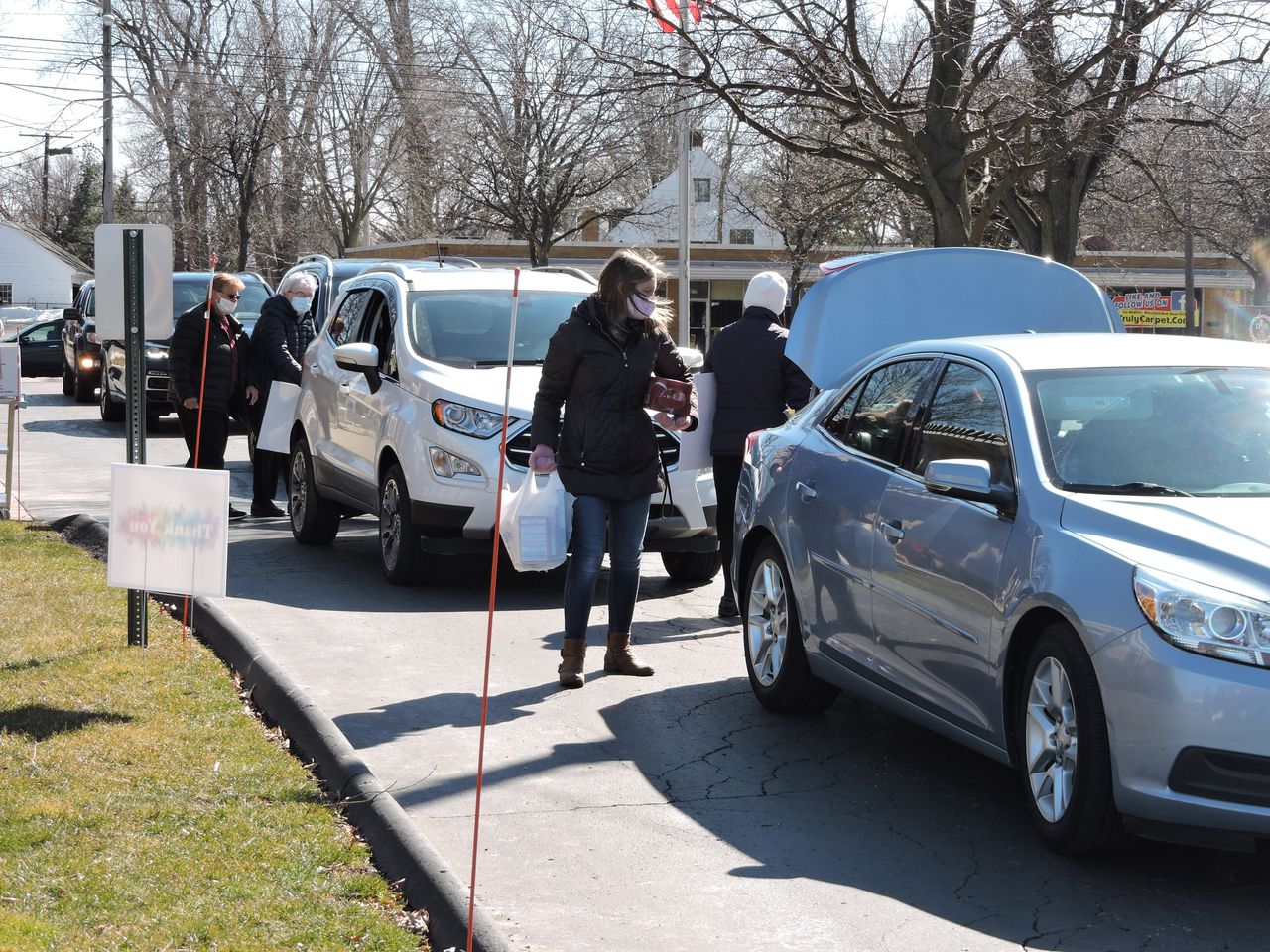 PARMA HEIGHTS, Ohio – A steady stream of cars drove onto the campus of Incarnate Word Academy in Parma Heights for two hours on March 7 as Sisters of the Incarnate Word hosted a drive-thru drop-off of non-perishable food in conjunction with Catholic Sisters Week, March 8-14. The sisters collaborated with IWA to continue the food collection through March 11.

Donated items were sent to the Parma Heights Food Pantry and the Bishop William Cosgrove Center in Cleveland, a ministry of Catholic Charities, Diocese of Cleveland.

The sisters called the food drive a big success.

The event was coordinated with the Conference of Religious Leadership, an organization of consisting of leadership from congregations of religious sisters in the Catholic Diocese of Cleveland. CORL issued a food insecurity challenge and asked congregations of sisters both locally and nationally — as well as the public — to join the campaign to address food insecurity. Incarnate Word Sister Margaret Taylor, congregational leader, said Sharron Dill, SIW development director, Sister Jacinta Benavidez and Sister Carol Tobler, both in SIW leadership, helped plan the local food drive.

“A number of people came right after noon and the truck filled quickly,” said Sister Taylor, who also is a member of the CORL leadership team. “It was a wonderful opportunity to thank the many people who came through, friend and stranger alike, who heard about the food drive and wanted to help.”

Sister Taylor said the food insecurity challenge is a collaborative effort to serve persons in need and bring much-needed awareness to the current increase in food insecurity and underlying causes, such as the COVID-19 pandemic, poverty, unemployment/underemployment and inconsistent access to healthy food,” said Sister Margaret Taylor, congregational leader of the Sisters of the Incarnate Word and a member of the CORL executive team.

Living walls: There are more than 4,500 plants growing on “living walls” inside the Western Campus STEM Center at Cuyahoga Community College, establishing roots for yet another honor from the U.S. Green Building Council.

“This building features green building aspects we’ve never used before, such as living walls and solar panels,” said David November, Tri-C’s sustainability manager. “It reflects the continued evolution of college efforts to be at the forefront of the sustainability movement.”

The STEM Center opened on the Parma campus in fall 2019, adding more than 60,000 square feet of academic space, with classrooms and labs designed to expand educational experiences for students entering science-focused fields.

Living walls serve as the green centerpiece of the STEM Center. The plant-filled panels stretch up to 22 feet high in the atrium, creating a healthy, natural and peaceful environment for students and staff.

Skylights above the living walls bring natural light into the interior and solar panels built into the skylights are expected to generate 5% of the building’s electricity needs.

Other sustainability features of the new building include a near 40% reduction in typical energy use due to building design, efficient heating and cooling systems, LED lighting and the solar panels, bringing an estimated annual savings of more than $50,000. Plumbing fixtures are designed to save nearly 79,000 gallons of water per year and there was an emphasis on using regional and recycled materials during construction.

Tri-C also diverted 81% of construction waste from landfills through sorting and recycling during the project. The STEM Center joins a growing list of Tri-C sites awarded LEED certification. The administrative center at Simulated Scenario Village at Western Campus earned certification in January.

Home days: Independence officials are reminding residents to mark their calendars for the city’s annual Home Days celebration. This year’s event will be Aug. 6-7. The theme will be “Dancing in the Streets.”

After last year’s event was canceled because of the coronavirus pandemic, event organizers are hoping residents will be able to gather once again this year for the festivities, which are centered around Public Square. Home Days is a longtime city tradition that includes food, music, games, community booths and plenty of family-friendly fun.

Organizers said more information on this year’s event will be available soon.

Born and raised in Parma, Kwiatkowski and her family moved to Seven Hills during her senior year in high school. She said it was more than a city; it became a place she called home. She loved the city so much that she and her husband Ron decided to remain in Seven Hills to raise their three children.

Kwiatkowski is the owner of Maryann Candies, which is located in historic downtown Brecksville. Originally a loyal customer and then employee, Kwiatkowski purchased the candy story in 1987. She kept all the original owner’s recipes and added a few of her favorites. The shop features simple display cases with glass jars lining the shelves. The jars are filled with a variety of treats.

Kwiatkowski is known for her community involvement and “behind-the-scenes” kindness. She often provides donations including sample trays or raffle baskets for community causes and her shop supports city and school functions, as well as providing candy for various community events. She and her daughter Holly support fundraising efforts for a variety of local charities including the Autism Society of Greater Cleveland and their annual chili cook-off, Cornerstone of Hope in Independence and the Allison Rose Foundation.

Information, please: Readers are invited to share information about themselves, their families and friends, organizations, church events, etc. in Brooklyn, Independence, Parma, Parma Heights and Seven Hills for the Sun Postings column, which I write on a freelance basis. Awards, honors, milestone birthdays or anniversaries and other items are welcome. Submit information at least 10 days before the requested publication date to [email protected]