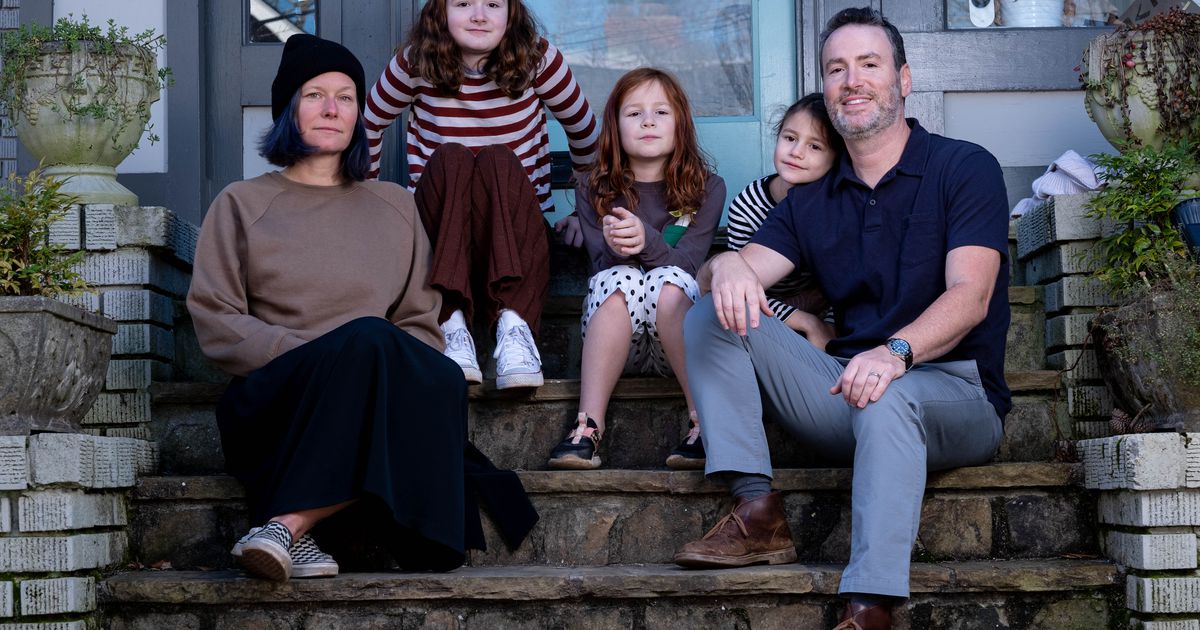 The Jordan family is African-American. Sienna’s father, Mike Jordan, admits that he and his wife process the news themselves before talking calmly with her. “She’s good at balancing things and is an extremely nice person. We’re protective of that. She has been more aware of politics in the past year. She is an only child and hears our conversations. She doesn’t understand why people say things that aren’t true, and in her heart, she doesn’t understand the reason for the violence. I’m in my 40s trying to react to what’s going on; I can’t imagine what it’s like for a 9-year-old brain.”

Jordan’s teachable moment was telling Sienna that “we don’t lump people into a group… We don’t label people; we care about their character and moral integrity,” says her mother. “It’s a lesson that will hopefully apply to a lot of different things. She’s at that in-between age where she’s too old to be oblivious to what’s happening, but she’s still young enough to need guidance to understand morals and integrity. We try to tell her as honestly as possible in a language that she’ll understand but also not stroke fear.”

Jacinta reminded Sienna, who accompanied her mother to vote, that “she has white friends, and they are nice to her. She’s a little Black girl. We can’t pretend, though, that these things aren’t happening.”

Dr. Judy Wolman, a psychologist at the Sandy Springs Psychological Center, says to make sure children are not too stressed by current events. “We must reassure our children that they are safe. With kids, I would recommend asking them what they’ve heard — from school, friends, social media — and then fill in at the level of your child’s understanding.”

Wolman advises talking in a calm voice and pointing out that people have different points of view. “You can even say, ‘This is how our family thinks about this, but other families have different opinions.’ Of course, you point out that it’s never ever OK to hurt people emotionally or physically. With older children, you can have a family discussion and talk about differences.”

Acknowledging openly everyone has bias is important, says Regina Wallace, K-12 social studies coordinator for Clayton County Public Schools. The county believes controversial issues should be addressed in a way that is “healthy. We start with the disclaimer that these topics are personal. We ask teachers to recognize their biases and get it out of the way. Present it in a way where students can find their own truths.” All discussions revolve around the four Ps — perspective, primary sources, propaganda, past experiences — a discussion tool that parents can use at home.

Jason Burke Allen, an educator and teacher activist, reminds students that “at the end of the day, no matter what side you land on, we’re all humans, and then start breaking down barriers. We have to teach how to agree to disagree and respect. We have to challenge whites and Blacks, and share stories. There are different experiences between whites and people of color. We have to challenge, disrupt the system and not be silent. But you have to de-escalate any violence. We have to take things to a higher level and remember what is a fact and what is an opinion.”

Jennifer Holbach, a television producer, is an activist mom who takes her daughters, Riley, 11, Etta, 8 and Laly, 6, to political events; the Holbach family is white. “We approach the conversations differently with our girls because of the age differences. We all watch the news, and you have to talk about it. The oldest talks with classmates and has all the information and understands. We want all of them to understand what’s happening in a facts-first way before the emotional part comes in. And, we make sure they understand they’re safe; that’s important.”

She says, however, she didn’t shy away from the differences between the Black Lives Matter protests and what happened at the Capitol. “My oldest recognized that before we even had a conversation about it. For the youngest, it’s too complex.”

Holbach tells her youngest to imagine that she was playing a game and lost. “You’re allowed to be sad, but you can’t hurt others just because you lost. And, with all three, we teach them that it’s important to make a positive impact as opposed to a negative one. Fine, you don’t like what’s happening, here’s how you can change it. Move forward in a healthy way.” 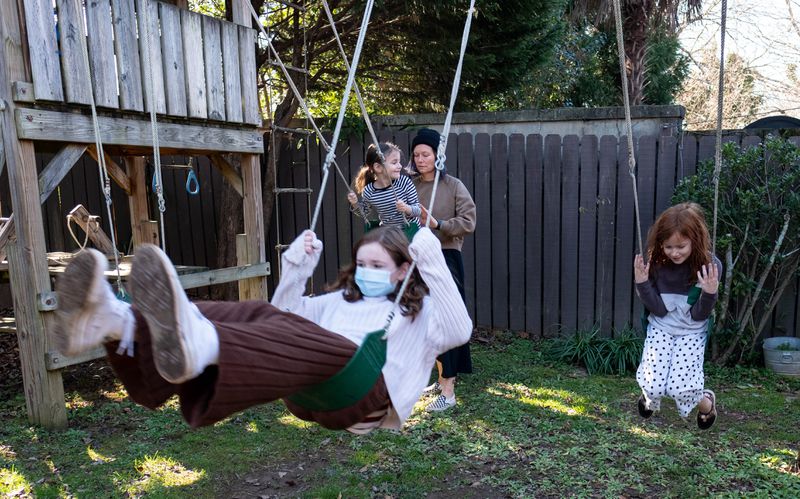 210115-Atlanta-Jennifer Holdbach with her children Riley, 11, Etta, 8 and Laly, 6, shot Friday, Jan. 15, 2021 at their home in Virginia-Highland. Ben Gray for the Atlanta Journal-Constitution

Her husband, Evan Cohn, is fact-driven, and she admits she reigns in her zeal with the girls. “It’s easy to get passionate about things. I do want my opinions to be rooted in facts. But I have to be careful not to take it too far.”

Wendy Baker, who supports Trump, is helping raise her fiancé’s 14-year-old daughter, Reece Harvil. “She’s wondering why this is happening and who is at fault. When the Capitol was stormed, she asked if Republicans were really doing that. She had a lot of questions.”

Baker says that Reece will sometimes parrot something she’s heard and “no matter what’s she’s saying, I tell her to go research it and find out if it’s true. And, she’ll do that. But honestly, I don’t know what to say when you’re watching the news and one channel says one thing and another says something else. It’s hard to know the facts. I have to remember that everything she hears is funneled through a 14-year-old brain. She gets her information on Instagram, Snapchat and TikTok.”

She admits that she, like Holbach, has strong opinions and expresses them with Reece but also wants her to know the other side. “We have Republicans and Democrats in our family, and while it’s hard for me to sometimes take my personal opinion out, we talk about what is right and what is wrong. It’s just a weird time, but she does have a hunger to figure things out for herself.” 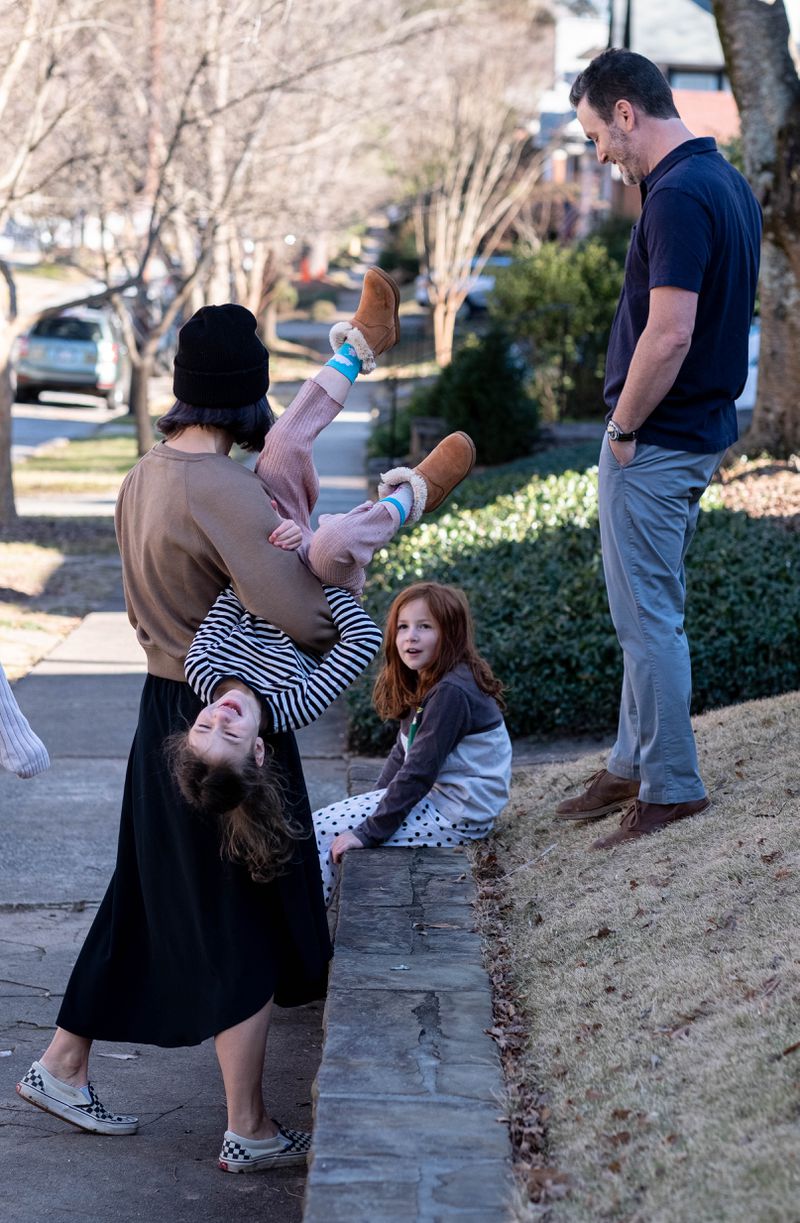 210115-Atlanta-Jennifer Holdbach flips her daughter Laly, 6, over while her and her husband Evan Cohn talk to one of their other daughters Etta, 8, Friday, Jan. 15, 2021 at their home in Virginia-Highland. Ben Gray for the Atlanta Journal-Constitution

Valerie Failla and Garrett Heaberlin’s daughters, Brooke, 10, and Elle, 8, are absolutely aware as “they can be,” says their mother. “We give them information, watch the breaking news and then talk about it. We asked our 8-year-old, and she said it was OK to like Trump or Biden, but it’s not fine to harm anyone who you don’t support. That’s what we’re focusing on — violence is not the answer. We’ve talked about Black Lives Matter, what happened in downtown [Atlanta] and in Washington.”

Amy Leavell Bransford was at her business, Aviary Beauty + Wellness, when she heard of the Capitol uprising. “It was like 9/11. I just wanted to be back home with my family. It was so emotional. Then my husband and I had to reconcile what’s happening and teach the important lessons to our children.”

One lesson for the Bransford sons, Miles, 14, and Rocco, 11, is “accountability. It’s important to teach children accountability for their actions and to tell the truth. We’re doing our best to raise our sons to be pro-women, pro-minority, honest and truthful. Our biggest challenge is how to do that when you have a president who says and does what he wants and is not accountable?”

As a child, she would have dinner at her best friend’s — a Republican household — and they would talk politics and laugh. “It’s so divisive now; you can’t have a conversation. We do try to keep the landscape where at least people are comfortable to ask questions and talk. Everyone’s having a hard time. You have to give people the space to talk and discuss it with as much clarity as possible. But I do fear that other kids are struggling with anxiety. How do you reconcile what’s happening?”

Reconciling the events and turning them into learning lessons seem to be the way many are helping children understand. And, there are a lot of lessons out there.

For Sienna, her father hopes that one lesson, in particular, stays with her. “She is beginning to understand that voting is a privilege and a right and that she will have a responsibility to vote. If anything is to stick out of all of this, more than anything else, is her enthusiasm about voting.”

Clayton County Public Schools developed the Four Ps to “promote critical thinking among students around topics that are giving rise, or likely to give rise, to public disagreement.” Students’ thinking, the district says, must be “supported by sources that provide a variety of perspectives, establish a historical context and facilitate the development of more student-drive inquiry for collaboration. The goal is to “allow students to seek their own truth and form their own reasonable opinion.”

Perspective: Analyze the issue through the lens of a variety of viewpoints.

Primary sources: Examine first-hand accounts and media that provide facts and opinions related to the issue.

Propaganda: Evaluate sources for bias or misleading nature that may be being used to promote or publicize a particular political cause or point of view.

Past Experiences: Consider the historical context of the issue. What historical people, places and/or events are related and aligned to the issue being discussed?