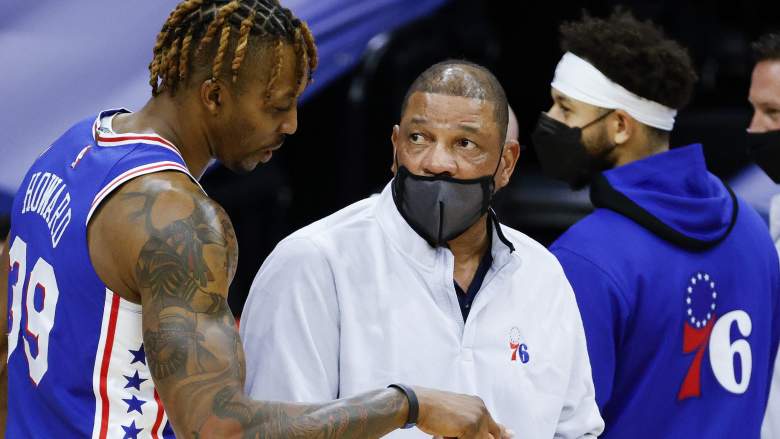 Dwight Howard finally said what everyone else in the room was thinking: the Sixers’ roster is full of talented guys who just need to believe in each other. That’s it. There is no reason to make an awkward trade and disrupt the team’s chemistry.

Those words came much easier after watching a short-handed squad — no Joel Embiid, no Ben Simmons — beat the Chicago Bulls by 22 points on a random Thursday night in March. Even so, it’s an important point and one the savvy veteran center felt the need to make. The Sixers have been linked to just about every shooter with a pulse thought to be available at the deadline. Maybe the ultimate power move would be to stand pat.

“I think it shows that we have what we need to win, we just got to believe,” Howard said. “We have a full roster of guys who are very talented who can help on both ends of the floor, it’s just all about believing and I think for guys like Tony [Bradley], and what he did tonight, it shows him that he can compete and he can play at a high level.”

Most impressive win of the season. I realize #Bulls aren’t a good team, but they are threatening for a playoff spot … #Sixers dispose of them easily without Joel Embiid & Ben Simmons, 127-105. #HereTheyCome

Their bench outscored Chicago’s bench 49-33 during a 127-105 rout. They also received 32 total points from Howard (18) and Tony Bradley (14) who picked up the slack at the center spot for a sidelined Embiid. Second-year guard Matisse Thybulle chipped in with 13 points on 3-of-3 shooting from deep, with Shake Milton and Furkan Korkmaz combining for 26.

It was the Sixers’ most impressive win so far this year — and they did it without Tobias Harris scoring 50 points. He finished with 24 points in 25 minutes.

“Fifty points would be great,” Rivers joked when asked about Harris before the game. “I think we’re just going to play him the way we play him. His usage rate will go up, just in the fact there is no Joel or Ben out there but everyone is going to have to pitch in. I just want him to be Tobias and be consistent in the way he plays.”

Simmons has climbed to the top spot in the NBA’s Defensive Ladder rankings, something already talked about in this space. His “hustle” stats of deflections (3.9) and loose balls recovered (1.4) are almost immeasurable. And Embiid owns the fourth spot on that list due largely to the fact he has opponents shooting less than 40% at every distance from 5-feet and farther.

Matisse was EVERYWHERE on D in the first half, recording *FIVE* steals! pic.twitter.com/ZJca0ziIdg

Rivers attempted to explain just how much they were going to miss those two guys this week as they await clearance from COVID-19 protocols. The Sixers head coach believes his squad is the best defensive team in the NBA when Simmons and Embiid are on the court. He might be biased, but he’s not wrong. Facts are facts.

“I think when we’re all healthy and playing, I think we’re the best defensive team in the league,” Rivers said. “When you take two of the top five defenders in the league off the court, you know, in the whole league, it changes your whole defense.”

The Sixers played suffocating defense against the Chicago Bulls. They held All-Star Zach LaVine to just 19 points on 7-of-16 shooting from the floor while grabbing 11 steals. Credit Thybulle for stepping up his game on both ends of the floor.

Still Room for Improvement, Though

The Sixers aren’t content to sit on their laurels, not even with the third-best record in the NBA. Rivers singled out two major areas for improvement in his pre-game comments to the media: transition defense and pick-and-roll defense.

“I thought we missed a lot of fast-break opportunities in the first half of the season,” Rivers said. “In transition after makes, after misses at times, where we chose to walk the ball up the floor, and we want to get out of those habits. And then the last thing is just taking care of the ball.”

How did they do versus Chicago? The Sixers turned the ball over 11 times to the Bulls’ 19 while outscoring them 12-6 in transition. Pretty good start.

.@sixers outscored @chicagobulls 78-42 in the paint in tonight’s win. Per @EliasSports, it’s just the 3rd time in the last 20 seasons the 76ers scored 75+ PITP.