What would be considered the best coffee for a flat belly? Drinking it black. Or at least, that’s what research tells us. And with good reason: enhanced coffee beverages like those at Starbucks can range from 90 calories all the way up to 600. Even at-home alternatives that brand themselves as healthy can be cause for concern—especially these The Unhealthiest Coffee Drinks on Shelves.

But black coffee can’t be the only way, right? In an effort to find a solution for those of us who just can’t stomach the plain beverage, we consulted the experts on the best ways to make coffee for a flat belly. Is it possible to make coffee that tastes better than black, without causing major bloat? They had a few ideas.

Read on and learn to prepare flavorful coffee without exorbitant amounts of calories, and for more healthy tips, be sure to check out our list of The 7 Healthiest Foods to Eat Right Now.

Yes, you read that right. We hadn’t heard of it either, but PN1 Nutritionist Malorie Thompson swears by this trick. Simply blend or whisk your black coffee with a tablespoon of peanut butter, she says.

“The peanut butter adds a creamy richness, along with a protein boost and some healthy fats. It’s so yummy!”

Get even more healthy tips straight to your inbox by signing up for our newsletter!

There are more sugar replacements on the market today than ever before; some are better than others, when it comes to health-consciousness. Wellness consultant Manoli Lagos recommends using Stevia or Monk Fruit, both of which are non-caloric and have no impact on blood sugar levels, instead of classic sugar alternatives like Sweet N’ Low.

Two of the healthiest sweeteners, though, have been on the market forever: honey and maple syrup. Elizabeth Beil, RDN, recommends trying one of these instead of artificial sweeteners to cut down on the number of fake ingredients in your coffee.

“Bonus if you obtain your honey locally,” she adds.

Here’s What Happens to Your Body When You Eat Artificial Sweeteners.

A little spice goes a long way when it comes to coffee flavoring, and cinnamon is by far the most-cited choice by experts.

“A very good replacement to liven up your cup of joe is by simply adding cinnamon,” says Dr. Linda Khoshaba NMD and Founder of Natural Endocrinologist Specialists AZ.

Khoshaba also says to opt for Ceylon cinnamon over Cassia cinnamon, if you can. The former has been shown to lower blood glucose, triglycerides, and cholesterol levels.

Beil also backs cinnamon as a powerful healthy additive, explaining that it “will also provide you with antioxidants- like polyphenols – to protect you from oxidative damage from free radicals.”

Cocoa powder, for example! Be sure to buy the powder with no added sugar, and then stir into your coffee to your liking.

“This will add a deep and rich mocha-like flavor, and is loaded with antioxidants and has been shown to reduce the risk of heart disease,” says Dr. Khoshaba.

Other flavor ideas range from peppermint to pumpkin to the tried and true—vanilla.

“Heavy cream in coffee is a sure-fire way to cause bloating, especially amongst lactose intolerant individuals,” says Dr. Khoshaba.

While cream itself isn’t the healthiest option, there are plenty of new, in-vogue alternatives that will create a similar taste—like one of these milk alternatives.

“If I am in a hurry,” says Gilstrap, “cinnamon and coconut cream are easy ways to flavor-up my coffee, all while adding healthy fats and decreasing inflammation.”

Lagos points to non-dairy milk and creamers in general as wise, nourishing options. His favorite? Califa Farms Cashew Creamer, which is sweetened naturally with dates. Or check out one of these 8 Best Almond Milks to Buy, According To Nutritionists. 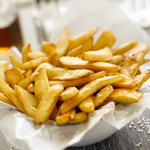