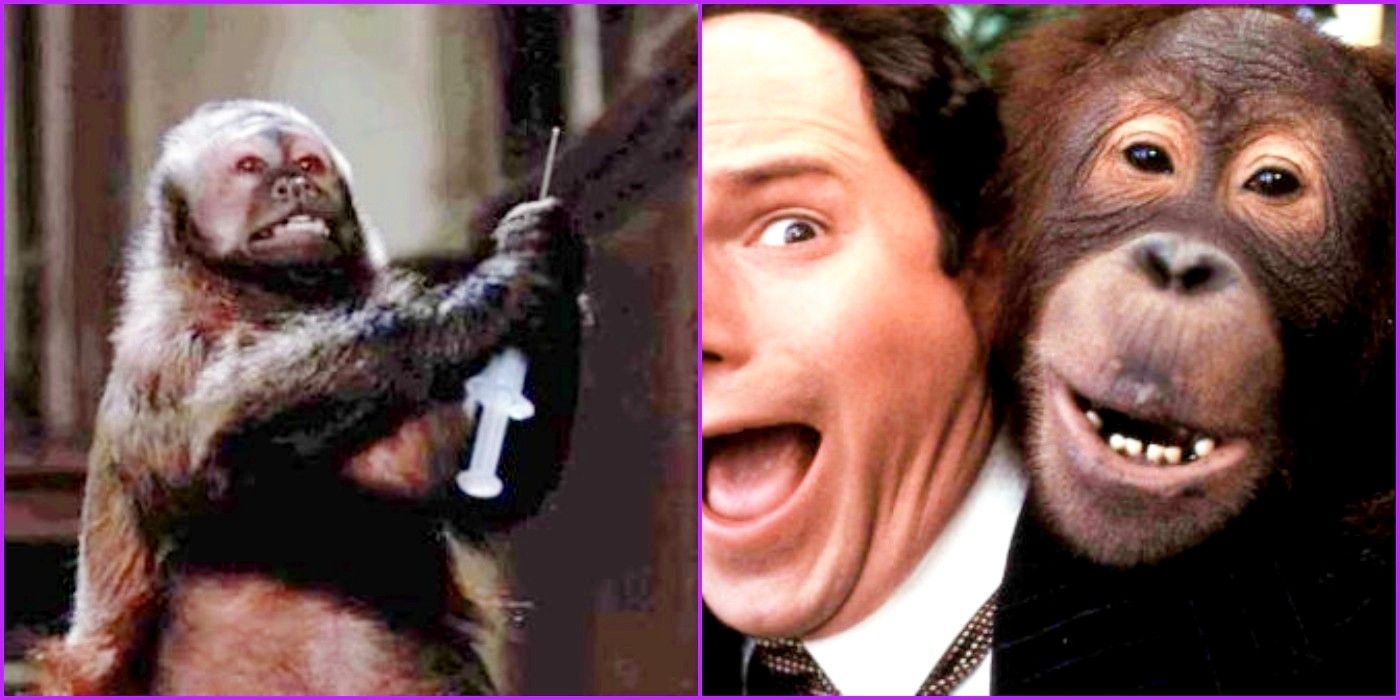 It’s always an exciting treat to see real animals play roles in movies. Here are some of the best movies that cast real monkeys, ranked by IMDb.

“Stop Monkeying Around!” is a famous quote used to express how monkeys really get into a lot of unnecessary mischief and trouble. The special liveliness that comes with animal-featured movies, especially primates, is really one of the top attractions captivating movie audiences.

While not all movies involving monkeys were great movies,  the monkeys were certainly not the problem. Monkeys are extremely intelligent with unique personalities, trainable, and they have the desire to interact with humans. These qualities make them great candidates for distinct film-making. Let’s explore some of the best monkey appearances in movies that have remained memorable.

In the movie Congo, a gorilla named Amy can communicate with humans using a device a researcher has created. Amy misses her home in Africa but due to her incredible intelligence and usefulness, a team of explorers and rescuers take her on a journey to find the lost members of an expedition team. The cast members include actress Laura Linney, and actors Tim Currey, and Dylan Walsh. The movie expresses a strong bonding between Amy and the other humans and the moral aspects of animal life, freedom, greed, and determination at all costs.

The 1996 fun family flick Dunston Checks In features an orangutan named Dunston who causes a world of havoc in a hotel after escaping from his thieving master and befriending a young boy. Dunston is working hard to be good but his life of crime makes him a mischievous primate who creates too many problems for the hotel owner and drives the guests crazy with his wild antics. The movie is a fun comedy and can be enjoyed by any audience. Critics of the film say the movie is like a playground of fun events and wild moments. Dunston, who’s real actor name is Sam, gives an amazing performance for such a complex plot.

The movie Bedtime for Bonzo was made famous as a cult classic for the performances of Ronald Reagan who would later become the 40th United States president and Bonzo the chimpanzee whose real actress name was Peggy. The old black and white movie was a fun movie about a psychology professor who attempts to educate Bonzo on human morals and raises the chimp as his child. A fun trivia fact, one day on set, Peggy got a little too handsy and pulled Reagan’s necktie catching him off-guard. She pulled so tight that he could not breathe and had to pry her off of him and get a crew member to cut the bow tie off before it suffocated him. Show business is a dangerous business.

King Louie from The Jungle Book is an orangutan who is the leader of the ancient ruins community of monkeys. The orangutan actor was known as Lowell in his acting career and gave a fun and talented performance in the 1994 rendition of The Jungle Book. The movie prides itself on using a full animal cast of real trained animal-actors. King Louie was among the talented animals in the film and he performed like a true star. Cast members included Jason Scott Lee as Mowgli, Cary Elwes as Captain William Boone, and Lena Headey as Kitty Brydon.

Here is every monkey-lovers worst nightmare come true. George A Romero has a knack for horror film making and the movie Monkey Shines is a psychological horror that does not disappoint. It follows a sports player named Allan who becomes a quadriplegic after suffering a terrible accident. He bonds with an intelligent capuchin whom his friend appoints to him as an aide.

RELATED: Ranking All 15 George A. Romero Films From Worst To Best

Unknown to Allan, the monkey has been experimented on and injected with human brain tissue to make it extremely intelligent. Soon things turn ugly as Ella, the monkey becomes possessive of Allan and carries out murders, even killing Allan’s friends and family members.

The movie Night at the Museum is a fun family movie about museum artifacts and statues that come to life at night due to a magical Egyptian artifact. The main character is Larry Daley played by actor Ben Stiller, an overnight watchman who is meant to keep the museum safe. Dexter is a taxidermy capuchin who comes to life as a mischievous monkey causes Larry a load of headaches. Dexter is played by animal actress Crystal, who also played in Disney’s 1997 film, George of the Jungle.

Famous inspirational Western-film actor Clint Eastwood stars in this fun action movie called Every Which Way but Loose as Philo Beddoe a brawler and trucker who has a best friend named Orville, an orangutan. The movie is meant to have a humorous vibe to a story about a man who is looking for love and finding his way. Orville the monkey really helps him get through his relationship issues and stays a loyal companion. The real name of Orville was Manis and he gave a stellar performance along with Eastwood making this movie a cult classic for comedy-action fans.

The movie Outbreak stars actor Dustin Hoffman as Colonel Sam Daniels, a virologist who is tasked with finding a solution to an outbreak with resembles Ebola. As it is later discovered the disease was brought over by a capuchin monkey named Betsy who was smuggled for exotic animal sales.

Betsy is infected by a man-made disease that was accidentally leaked out onto a base camp in Africa. Betsy escaped once in the US and spreads the infection like wildfire. The movie follows Betsy closely as she evades her captors and gives a talented performance. For trivia-fans, Betsy also played as Marcel, Ross’s pet monkey in the TV series Friends.

Most comedy fans are familiar with the Ace Ventura franchise which produced a few great sensational hits by the famously diverse and dramatic actor Jim Carrey. In the film, Ace Ventura is a pet detective who must solve animal crimes. He is the perfect person to do this because of his ability to connect with animals and communicate with them. Spike, the capuchin monkey is his somewhat-trusted sidekick who is just adorable to watch as he partners up with Ventura on his escapades. Spike’s real name is Binx and he is quite the celebrity; famously known for his roles in both acclaimed Ace Ventura movies as well as George of the Jungle and Outbreak.

For fans of Indiana Jones and his many adventures, the little capuchin is an adorable but sneaky little character in the 1981 release Raiders of the Lost Ark. The monkey is actually a thief in the story and he follows Indiana (Harrison Ford) and Marion (Karen Allen) by winning them over with his charms. The movie gives the monkey a horrible ending with his death being caused by a poisoned date meant for Indy. The little capuchin who’s real name is not known, gave a magnificent performance in the movie and his character has stayed memorable for many years.

NEXT: 10 Weirdest Bunny Appearances In Movies

Lynne Marie is a writer, editor, artist and teacher who is based out of California. She stays active both physically and mentally and is desperately in love with healthy living and getting into anything out-of-the norm. Her Maine Coon and Russian Blue kittens keep her frantic all night and laid back all day. She now works as a writer for Valnet, Inc, covering articles on ScreenRant. She is also an educator for learners of English as a second language.